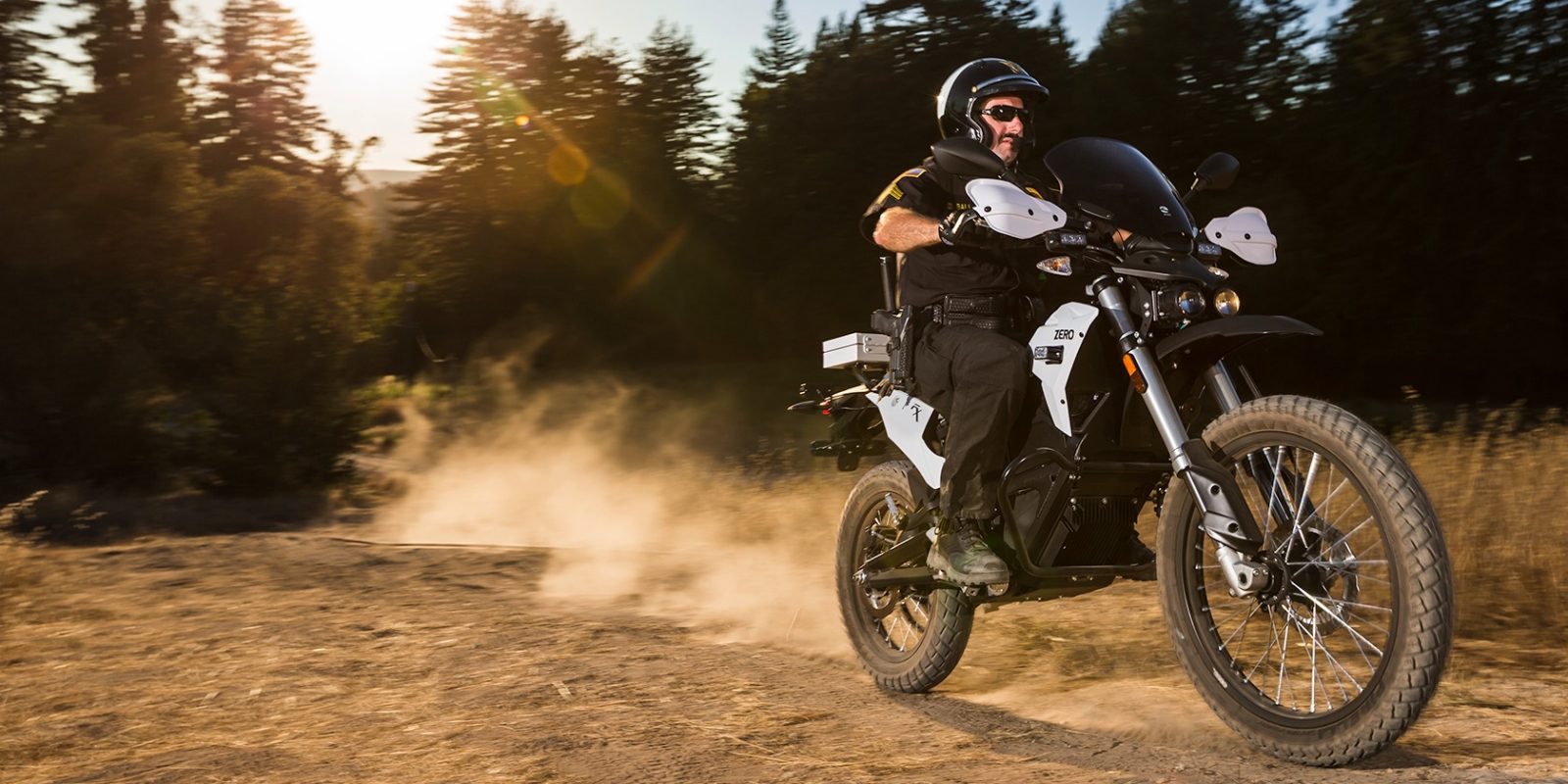 The motorcycle industry has always lagged behind the automotive industry, and while electric police cars are old news these days, many police departments and even military divisions are still learning the benefits of electric motorcycles for fleet duty.

Here are a number of interesting examples showing how electric motorcycles are helping police and militaries perform their work better, more quickly, and more sustainably.

It shouldn’t come as a surprise that most of the police electric motorcycles on the road right now come from Zero Motorcycles.

The North American-leader in electric motorcycles produces a line of police-specific e-motos based on both the DS and DSR (dual sport) platform and the FX (supermoto) platform. These bikes, known as the DSP, DSRP, and FXP, are prized for their ability to operate both on- and off-road, which is important to police officers who never know where the next call may take them.

In a rather comical twist of fate last year, a Bay Area officer on a Zero police electric motorcycle pulled over a Tesla driver in what must have been the quietest police pursuit ever.

Sergeant Ron Alberca of the LAPD’s Off Road Unit explained to Electrek how his department operates its six Zero police bikes:

“Our department currently has 6 Zero electric off-road motorcycles that are used in our large parks and mountain areas of the city that are not accessible to patrol cars. In the mountain terrain where we get a lot of hikers and mountain bikers, the response so far has been very positive.  Even in the equestrian communities, the electric off-road motorcycles have been welcomed.”

While Sergeant Alberca explained that the experience of using the bikes has been nearly all positive, the main issue they’ve run up against is simply battery life. They’re also still determining whether the electric motorcycles will be cheaper than gas-powered motorcycles over the life of the vehicles, as other police departments have found that electric cars actually paid for themselves quite quickly compared to gas-powered police cruisers.

Like everything else that is fairly new, the electric motorcycles have some pitfalls, mainly the battery life. The bikes are more expensive than gas-powered off road motorcycles. We’re not sure yet which bike will be more expensive in the long run. Which one will be cheaper to keep on the road, year after year for the life of the bike.

Sure enough, other police departments have also found electric motorcycles to excel at patrolling parks and off-road areas of cities.

We were so pleased with our first electric motorcycle we added a second for added deployment. Janesville, WI is known as “The City of Parks”, and we are glad we can deploy police patrols in all of our beautiful parks, bike trails, and green spaces easily, quietly, and efficiently, all while creating a safe environment for our citizens.

Our focus with the electric motorcycles is on patrolling our park system, bike trails, hiking trails, and other green spaces that a patrol car can’t reach. We have over 28 miles of bicycle trails to patrol and a 2,590 acre park system that includes 64 improved parks.

Some of the biggest advantages, Lt. Aagaard explained, come in the form of being able to access many of the green areas where the electric motorcycles can deploy without detracting from the environment.

The advantage to reach areas that we previously had not been able to patrol except by foot or bicycle is notable. The electric motorcycle allows officers to cover these more remote areas quickly, and still respond to calls for service when needed. The quietness of an electric motorcycle gives the officers the ability to be covert when needed. The fact that the motorcycle does not emit any tailpipe emissions means that it can be used indoors as well. And of course the electric platform is eco-friendly, which is a responsible choice on behalf of the police department.

What about military electric motorcycles?

Electric motorcycles haven’t only found use in police departments — they are increasingly finding service in the armed forces as well.

UBCO’s all-wheel-drive electric motorcycles are in service with the New Zealand Defence Forces.

There have been dramatic changes in technology over the last few years with electric vehicles a key emerging technology that the NZDF has been monitoring. After investigating a range of options, the NZDF selected UBCO for a trial in 2020.

Zero is also apparently making military-spec electric motorcycles, though I couldn’t get anyone at the company or in the US military to talk on the record about it.

From what I’ve been able to gather though through various sources, the military bikes are based on the Zero FX platform, with modifications including chain kits replacing the belt drives, among other modifications intended to increase the bikes’ ruggedness. There was also talk of a “get out of Dodge” button, which would disengage all safety limits on the bike. It’s not difficult to imagine a scenario where the last thing a fleeing special operator wants is to see a “heat warning” indicator turn on, slowing the bike to cool off the motor.

As electric motorcycles continue to grow in popularity and more police departments and military begin testing out their unique advantages, we’re likely to see a large increase in these types of fleet electric motorcycles, just like we’ve seen in electric patrol cars over the last few years.

Not only do they make sensible alternatives from stealth and operational perspectives, but the shift away from gas-powered vehicles in general is only accelerating the adoption of electric vehicles in all aspects of transportation.