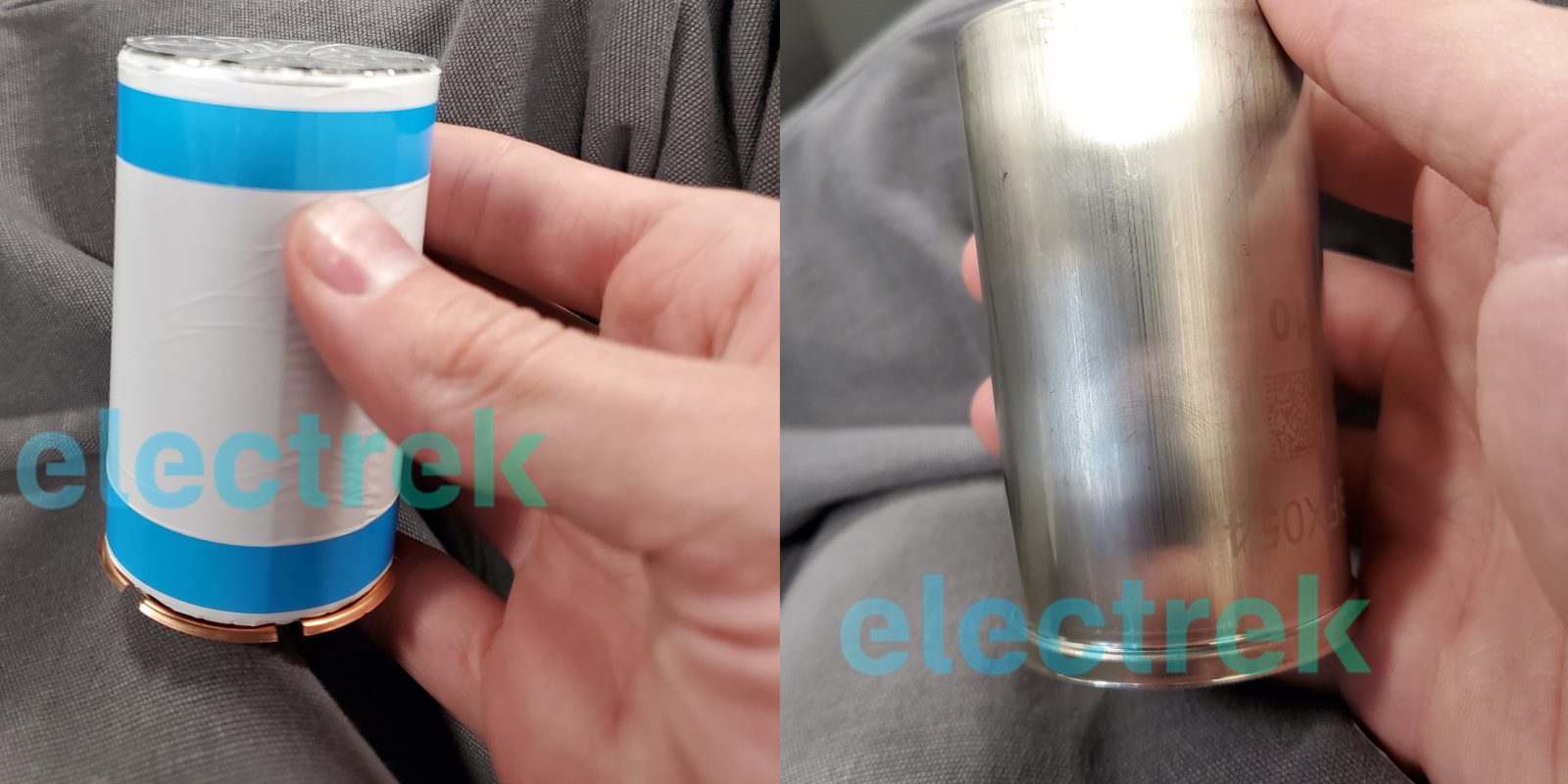 Ahead of Tesla’s “Battery Day,” we have been reporting on the automaker’s effort to build its own battery cells.

Tesla built a “Tera battery manufacturing facility” in its facilities on Kato Road next to its factory in Fremont to house the project.

While we got some information on Tesla’s effort to develop novel manufacturing systems to build battery cells, we didn’t have much information on the cells themselves.

Now we get what might be the very first look at these new battery cells produced by Tesla.

An anonymous source sent Electrek two pictures of a battery cell claiming that they were Tesla’s new in-house cell:

We started asking sources and circulating the images around to gather more information on this mysterious and large battery cell:

Another independent source was able to confirm to Electrek that this is indeed one of Tesla’s own battery cells produced with the Roadrunner system.

Tesla is still keeping the specs of the cell close to its chest, but we are still able to find out a few new details about the cell.

The diameter of the new cell is twice as big as Tesla’s 2170 cells currently used in Model 3 and Model Y vehicles and produced by Panasonic at Gigafactory Nevada.

Doubling the diameter of a battery cell results in four times the volume in the cell.

If the new volume is used efficiently, you gain a lot of capacity while reducing cost with fewer casings and fewer cells per pack.

Furthermore, the pictures appear to show a tabless cell, which is something we know Tesla has been working on.

Earlier this year, Tesla applied for a patent a new battery cell with a tabless electrode that Elon Musk hyped as “way more important than it sounds.”

The new cell design helps reduce the internal cell resistance for the current paths inside the cell, improving performance.

On top of the cell capacity improvements, the lack of a tab reduces cost and simplifies manufacturing.

The automaker is also planning to deploy the battery manufacturing system at its upcoming Gigafactory Texas in Austin.

More information is expected to be released at Tesla’s Battery Day next week.

This is a very interesting development. Those simple changes of having a much larger cell with a tabless design could alone result in a significant improvement in the performance of the cells.

Combine that with some potential material and chemical changes, and the overall performance improvements might be more than just incremental compared to Tesla’s current cells.

There could be room for improvement here too, since Tesla will be going from thousands of cells per pack to potentially less than a thousand with this cell format.

At this point, it’s also my understanding that Tesla plans to unveil more than one new battery cell at Battery Day.

We have previously reported on Tesla’s project Palladium, which involves significant updates to Model S and Model X, but it now looks like it could also involve new cells specifically for that project on top of the Roadrunner cells.

How Tesla plans to roll out those new cells into its existing vehicle programs in production without too much disruption is less clear.

We are likely going to have to wait until Battery Day to understand the full extent of Tesla’s plans.