The saying with electric bicycles (and many other things, to be fair) goes something to the effect of “You can have it good, fast, or cheap. Pick two.” But the Aventon Pace 500 electric bicycle comes dangerously close to giving us all three, as I discovered while testing the bike for our latest review

Electric bicycles in the US are usually divided into 3 Classes.

And today we’re looking at a Class 3 e-bike, ladies and gentlemen.

In all its glory, the Aventon Pace 500 is an unassuming e-bike that frankly doesn’t look that special. But this bicycle next door is a secret speed demon. Just take a look at our video review below, then read on to see why this e-bike packs in so much value. 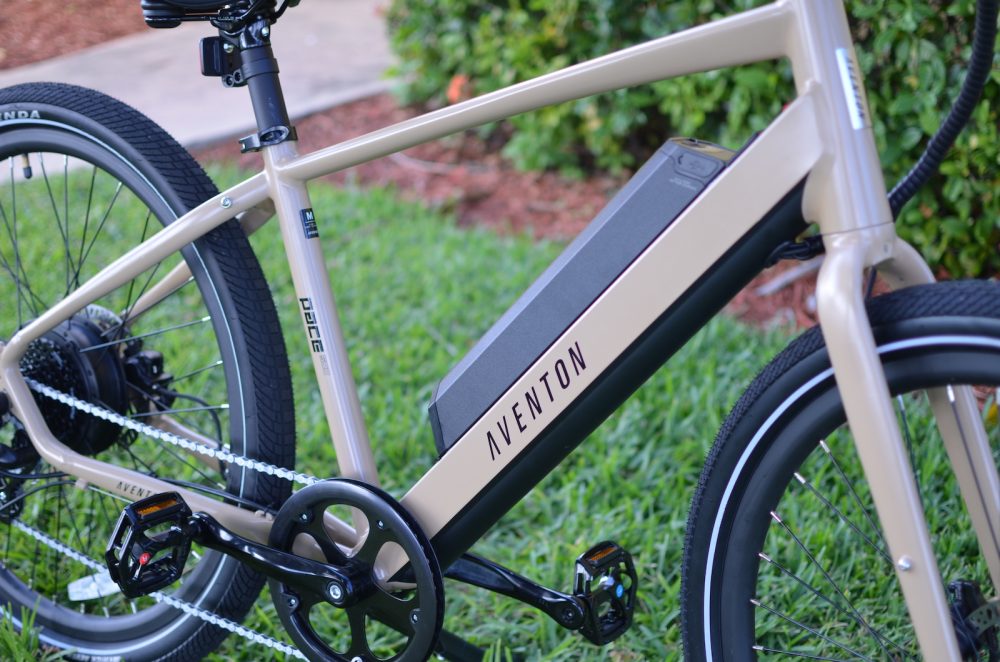 How well does it ride?

The Aventon Pace 500 feels like something of a mix between a cruiser and a city bike.

You’ve got that pedal forward design that provides an upright cruiser feeling while riding. Then the swept-back handlebars only add to the laid back sensation.

But at the same time, the bike’s geometry and tire choice make it feel more like a city bike designed for the rigors of urban riding.

While the hybrid was odd for me at first, I got used to it quickly and now I dig it. It’s like if you took a beach cruiser and optimized it for an urban assault setting. 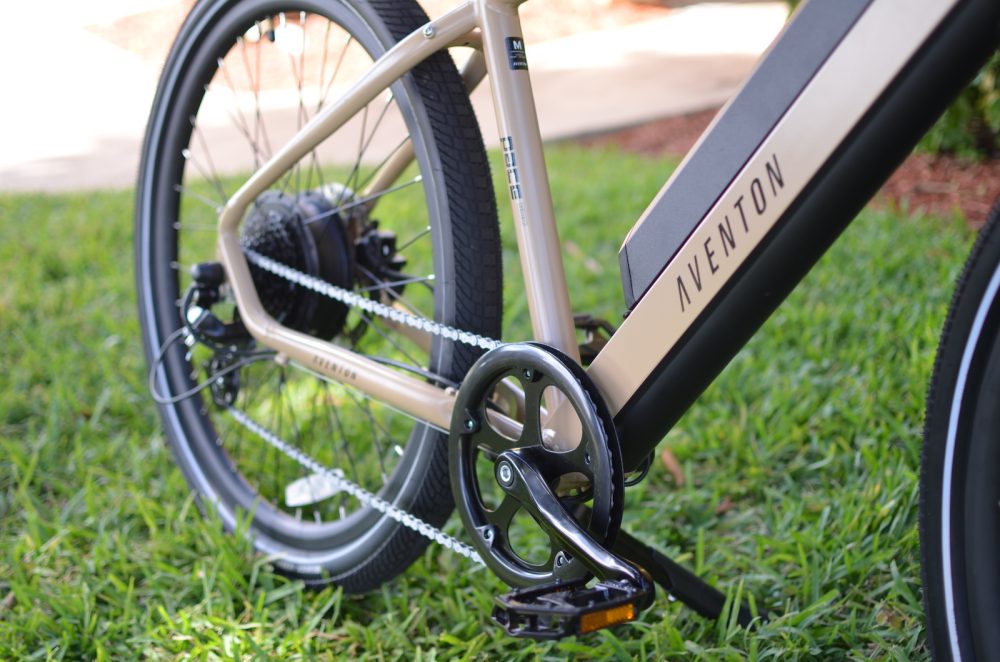 There are five levels of pedal assist that range from you doing most of the work to “Holy crap I’m flying at 28 mph!” To reach that 28 mph (45 km/h) top speed, you’ll want to be in the highest pedal-assist mode and you’ll have to do a bit of work to spin the pedals. In that way it feels like the RideScoozy VeeGo 750 – you don’t get to unleash the full speed without a bit of honest pedaling.

If you want to take a breather and ride around with the throttle only, you’ll be limited to a top speed of 20 mph (32 km/h). Generally speaking, that speed was fine for me when I was doing most of my neighborhood riding. But when I get out on the road with cars, it’s great to be able to pop the speed up to 28 mph (45 km/h) and take the lane like a car whenever possible. In my opinion, that extra speed is a safety feature more than anything.

I’m a big fan of the hydraulic disc brakes and the large LCD display on the Aventon Pace 500. The brakes give you better stopping power and require less maintenance, while the large screen is easily readable, especially at night.

The entire bike just feels like it is of higher quality than I’d expect for the price. I expected plastic pedals and I got full metal pedals. I expected no-name tires and I got some pretty nice Kenda’s. I expected janky welds and I got some of the most nicely finished welds I’ve ever seen on an e-bike. There’s just a lot more attention to detail than I expected on a bike of this price class. 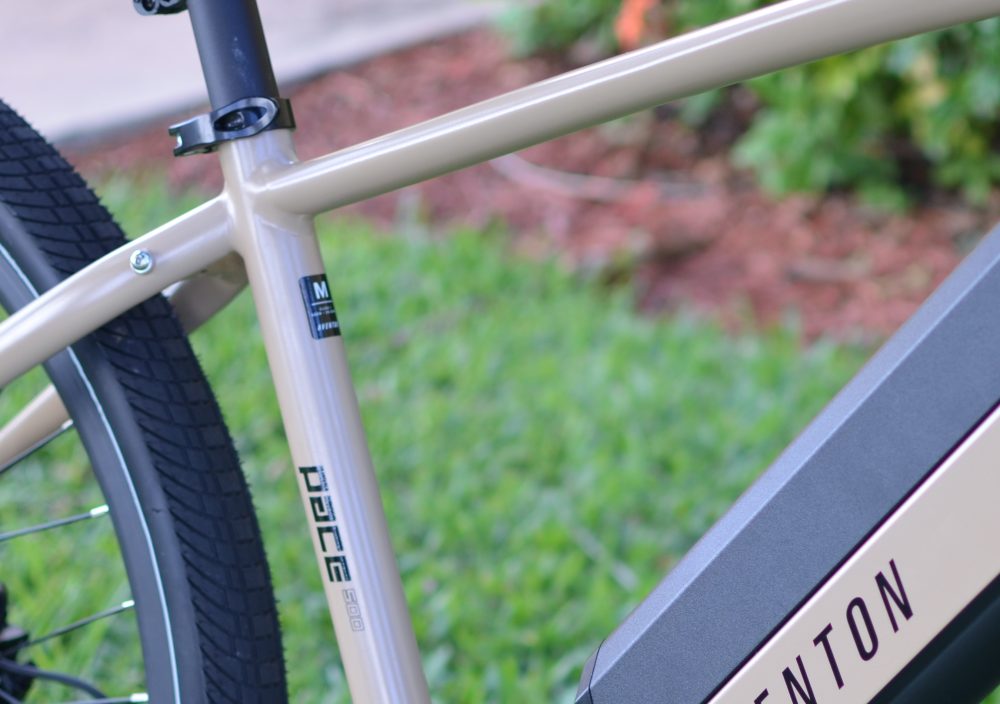 Where could it improve?

The bike isn’t perfect of course, and there are a few areas where costs were cut to bring the price down to $1,399.

When you receive the bike, it comes in a surprisingly small box. That certainly saves on shipping (which I’m sure Aventon appreciates since they give you free shipping which likely comes at a cost north of $100 for them). The problem is that it also means you have more assembly steps before you can ride. While many e-bikes take me 5 minutes to straighten the handlebars and pop on the pedals/seat, the Aventon Pace 500 requires more steps. You have to install both wheels, the brake calipers, the derailleur, the pedals, the seat, the handlebars, set the chain, etc. It’s not terrible, but it’s just more steps than I’m used to and some of the steps require a bit of dexterity and technical ability.

Next, the bike has a left-hand thumb throttle. I don’t mind thumb throttles, even if they aren’t my favorite. But I’m not a big fan of left-hand throttles. I feel like over a hundred years of motorized bikes has pretty much made right-hand throttles standard. Even in the UK where they do everything wrong, like installing brake levers backward and driving on the wrong side of the road, they still put the throttle on the right side. And who knows, maybe I’m alone here in my lack of love for left-hand throttles – but I don’t think so.

Lastly, the bike prevents starts from a complete stop using the throttle. This means you have to pedal for about one second before the throttle will engage, which Aventon says is a safety feature to prevent accidental throttle engagements. I’m not a huge fan of this feature not because I’m lazy, but rather because I like having the option of throttle starts to get me rolling in certain circumstances, especially if I’ve stopped in high gear or on an incline. But these are admittedly rare cases, and after all, this is a bike with functional pedals, so I can’t complain too much about needing to pedal for a second to access my throttle.

Other than that, I can’t really complain about anything on the bike.

Would suspension be nice? Sure. But if I had to choose between a suspension fork and that extra 8 mph (13 km/h), I’d choose the latter. This is very much a bike built for urban riding and if you’re staying in the bike lane, you likely won’t miss the front suspension too much. But that extra speed, that’s the key to turning the Aventon Pace 500 into a worth city commuter that can keep up with traffic when necessary, or blend back into the bike lane (at reasonable speeds) and do its bike thing.

And I think that ability to safely and comfortably hit higher speeds makes the bike strong competition against other popular 20 mph (32 km/h) bikes in its class, such as those offered by industry heavyweight Rad Power Bikes. Sometimes you just get the need for speed, and those slower e-bikes won’t cut it.

If you want to check the bike out, head on over to Aventon’s site where you’ll find the Pace 500 and a pile of accessories.

And let us know what you think of the bike in the comments below!