Bavaria’s PM on transition to EVs: ‘Tesla is not bad, but others can do it, too’

The German auto industry and its 800,000 jobs are threatened if it can’t transition to EVs fast enough. The country’s politicians, and automotive executives, have a unified message. As Bavaria’s prime minister Markus Söder put it today: “Tesla is not bad, but others can do it too.”

The threat to German jobs from EVs was the premise of a story today from Deutsche Welle (DW), the German broadcaster. While electric-vehicle technology reduces the number of parts to be assembled — a technological advance — it’s repeatedly characterized as the destroyer of auto jobs. The shift to better technology, improved engineering, and automation are not strictly related to electric powertrains. Those are broad industry trends.

A January report from the National Platform Future of Mobility (NPM), a research agency funded by the German government, warned that, worst case, more than 400,000 of Germany’s 830,000 auto-related jobs could be gone by 2030. The shift to zero-emissions vehicles is the main culprit — pitting the environment against jobs.

The German auto industry is changing but at a relatively slow pace. Volkswagen’s Zwickau car factory, shown above, now only produces electric models in future. It produced more than 6 million gas- and diesel-powered Volkswagen vehicles there since 1990.

NPM sums up the challenge:

Germany’s trade unions and the VDA (German Association of the Automotive Industry) trade body believe the dire predictions are wrong and will work to make sure they don’t come to pass.

The 9,500 job losses by 2025 at VW brand Audi were not in the form of ‘firings.’ They will come along demographic lines (retiring colleagues not being replaced, early retirement schemes, etc.). The job losses were also announced alongside the creation of new electromobility jobs.

The debate often gets reduced to a fight between German automakers and Tesla. That happened again today when Bavaria’s Prime Minister Markus Söder had a chat with Audi CEO Markus Duesmann in a public forum.

The prime minister said, “We need a real quantum leap. There has to be more speed.”

Audi boss Duesmann replied, “We have to make decisions faster. We have to jump now.” 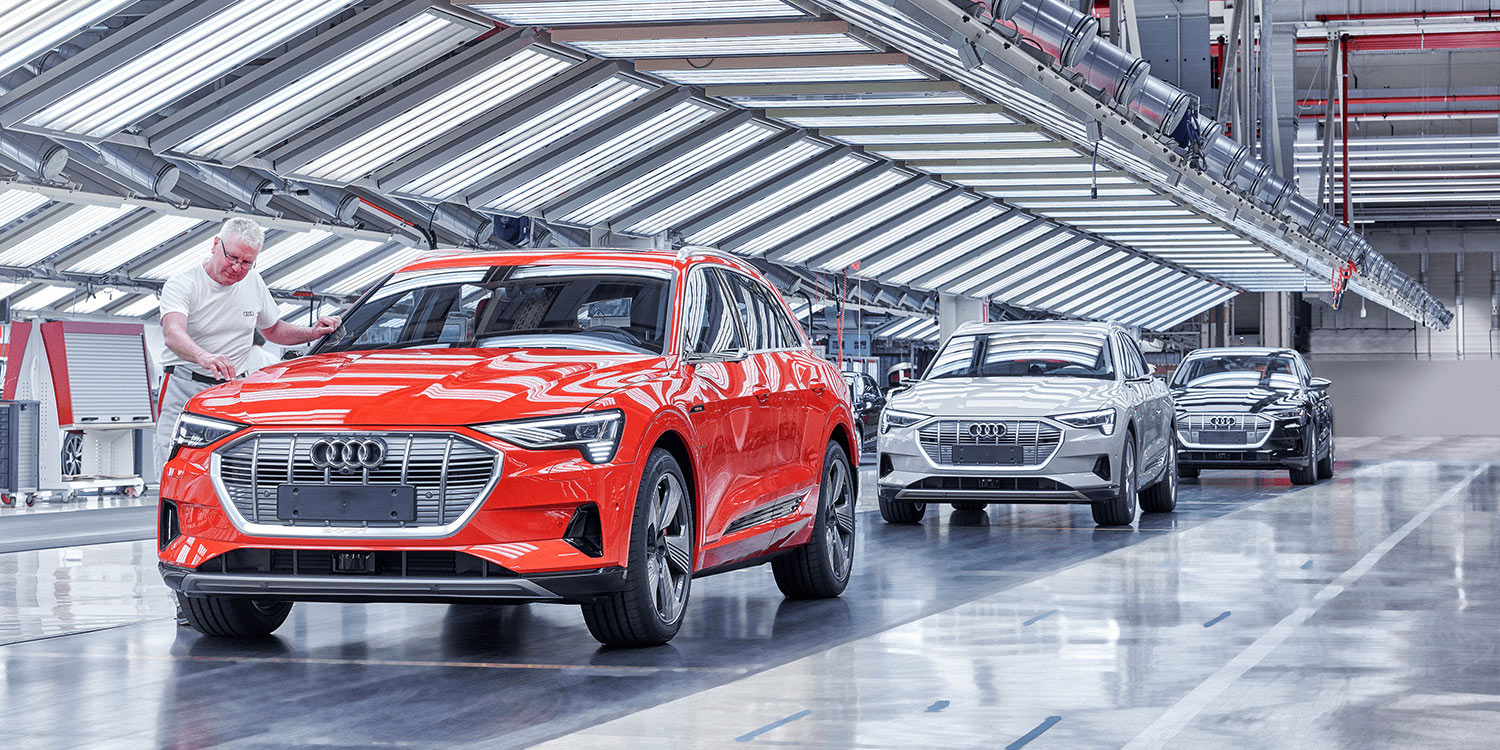 In February, Audi temporarily suspended production of its e-tron electric SUV due to battery supply problems. The car is produced in Belgium, shown above. The company is planning an assembly plant for electric-car battery packs near its plant in Ingolstadt.

Söder and Duesmann agree that the German auto industry can claim a leadership role in EVs over Tesla. Söder said, “Tesla is not bad, but others can do it too. We can stay ahead in engineering.”

Audi’s Duesmann said that Tesla does not have an extensive lead in battery technology. “We’re catching up,” he said. But he also pointed to the need to reduce CO2 emissions from gas-powered cars, the introduction of hybrid-gas electric vehicles, and the use of 5G communications.

Duesmann, who was installed as Audi’s CEO on April 1, set up its special Artemis project to break through the company’s bureaucracy and “implement additional high-tech benchmarks without jeopardizing the manageability of existing projects.”

It’s incredible how one California startup automaker could pose a threat to the entire German auto industry.

Whether that’s true or not, the discussion between Bavaria’s prime minister and Audi’s CEO reveals the alignment of German politicians and car companies on the existential need to shift to EVs. The stakes are high.

What remains to be determined is whether German automakers can execute on their EV plans, delivering best-in-class, mass-produced, and affordable electric vehicles across the globe — especially while continuing to primarily produce gas-powered vehicles.