A patent application shows that Tesla has been working with CureVac on a possibly revolutionary “bioreactor for RNA” for over a year.

Tesla CEO Elon Musk announced yesterday that the automaker has become the manufacturing partner for biotech firm CureVac who is working on a COVID-19 vaccine based on their RNA technology.

The CEO announced that Tesla would be “building RNA micro-factories for CureVac.”

It took many by surprise since it seems like Tesla is making a move in the biotech world, but we now learn that it has been in the works for a long time — even pre-COVID-19.

A tipster sent Electrek a patent application that Tesla jointly filed with CureVac through its Tesla Grohmann division in Germany.

The patent application is called “Bioreactor for RNA in vitro Transcription” and it describes an automated system for RNA manufacturing:

The patent application was filed in June 2019, showing that Tesla has been working with CureVac for over a year.

It describes a problem with current manufacturing processes for RNA molecules being labor extensive and requiring several different equipments.

The Tesla/CureVac solution solves those problems.

They argue that it would be more accurate and easily deployable:

An advantage of an improved bioreactor may be that it may allow for repetitive use of DNA templates in several RNA production processes which reduces the costs as less starting material (that is DNA template) has to be used and DNAse treatment can be omitted or substantially minimized. Moreover, an improved bioreactor may allow for the robust production of RNA with a higher purity profile (no residual DNAse, no residual DNA fragments in final RNA product). Advantages of an automated apparatus for RNA production are that the whole manufacturing process may be more robust and reliable (due to minimizing human error) and that the production of RNA may be accelerated.

Further, an acceleration of RNA manufacturing would be highly advantageous and of major importance for public health, especially in the context of pandemic scenarios. Further advantageous in that context would be the production of the RNA therapeutics in the region of the outbreak which would, however, require a portable RNA production apparatus.

Hence why Musk talked about Tesla making “micro-factories” for CureVac.

Here are some drawings from the patent application: 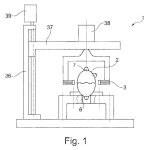 Here’s the joint Tesla and CureVac patent application in full: