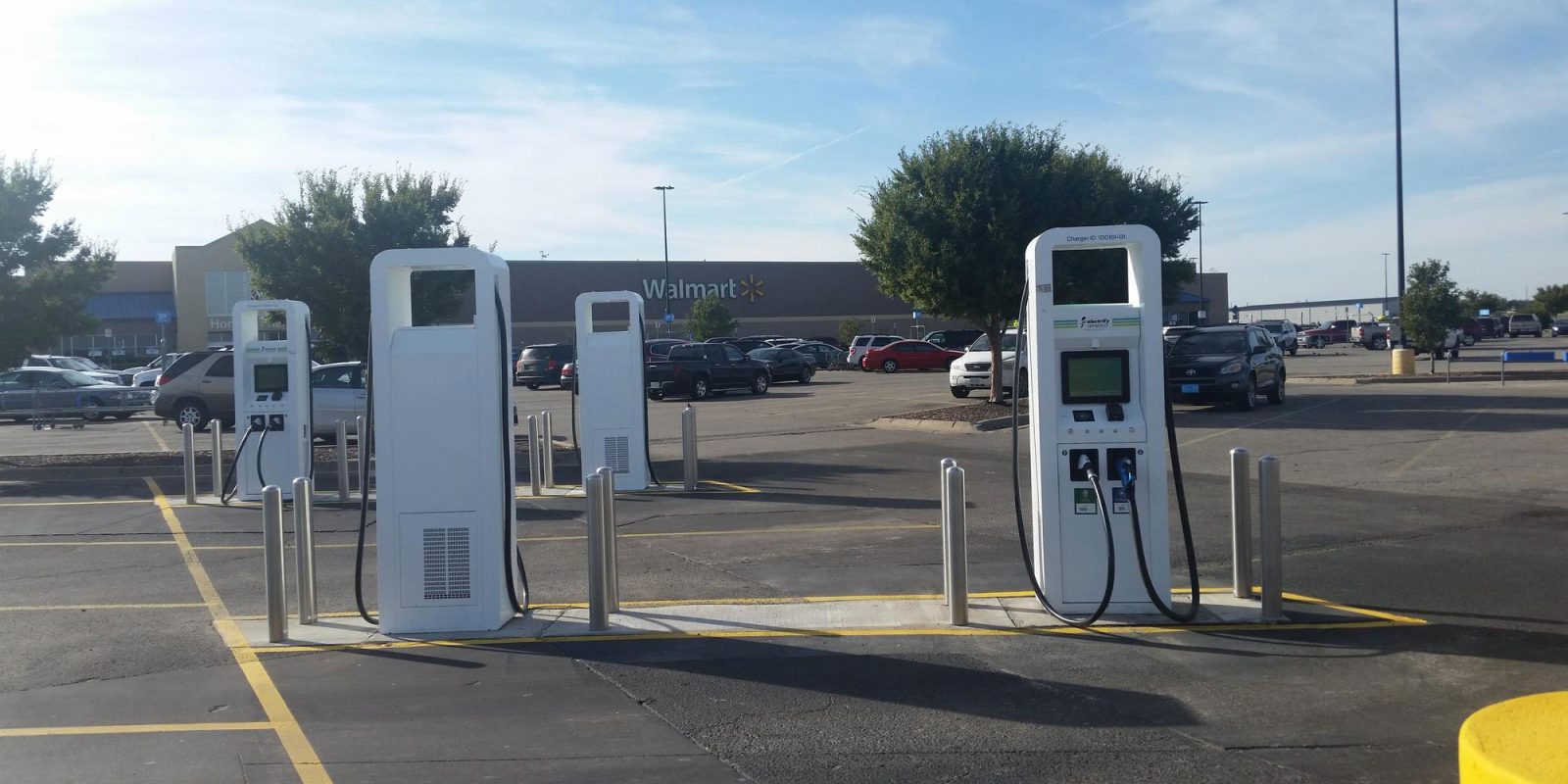 The long-term plan for the EV community is ubiquitous, go-anywhere charging from coast to coast. Cross-country routes have been available for Tesla drives via the Supercharger network since about 2014. It’s now possible for other EV drivers – as Electrify America today announced that its open charging network features the first of two planned fast-charge, cross-country paths.

The keyword is “open.” For EV owners – and those considering buying one – the brand of EV shouldn’t matter.

For electric vehicles to erase any perception of not granting the same level of freedom as gas cars, a cross-country trip should be feasible. Electrify America’s newly completed coast-to-coast route spans 11 states and over 2,700 miles. It takes drivers from Los Angeles to Washington, DC, along Interstates 15 and 70.

Anthony Lambkin, director of operations at Electrify America, in a press release, said:

Electrify America’s primary goal has always been to advance electric vehicle adoption in the U.S., and that starts by instilling feelings of confidence and freedom in consumers when it comes to EV ownership.

The completion of our first cross-country route is a significant step towards that goal – by making long-distance travel in an EV a reality, we hope to encourage more consumers to make the switch to electric.

The route is more symbolic than highly useful. How many drivers want to take a round-trip cross-country drive along a single prescribed route? While most of the Electrify America chargers offer speeds up to 350 kilowatts, most of the compatible EVs available today have considerably slower max charging rate and a driving range not ideal for an easy cross-country road trip. 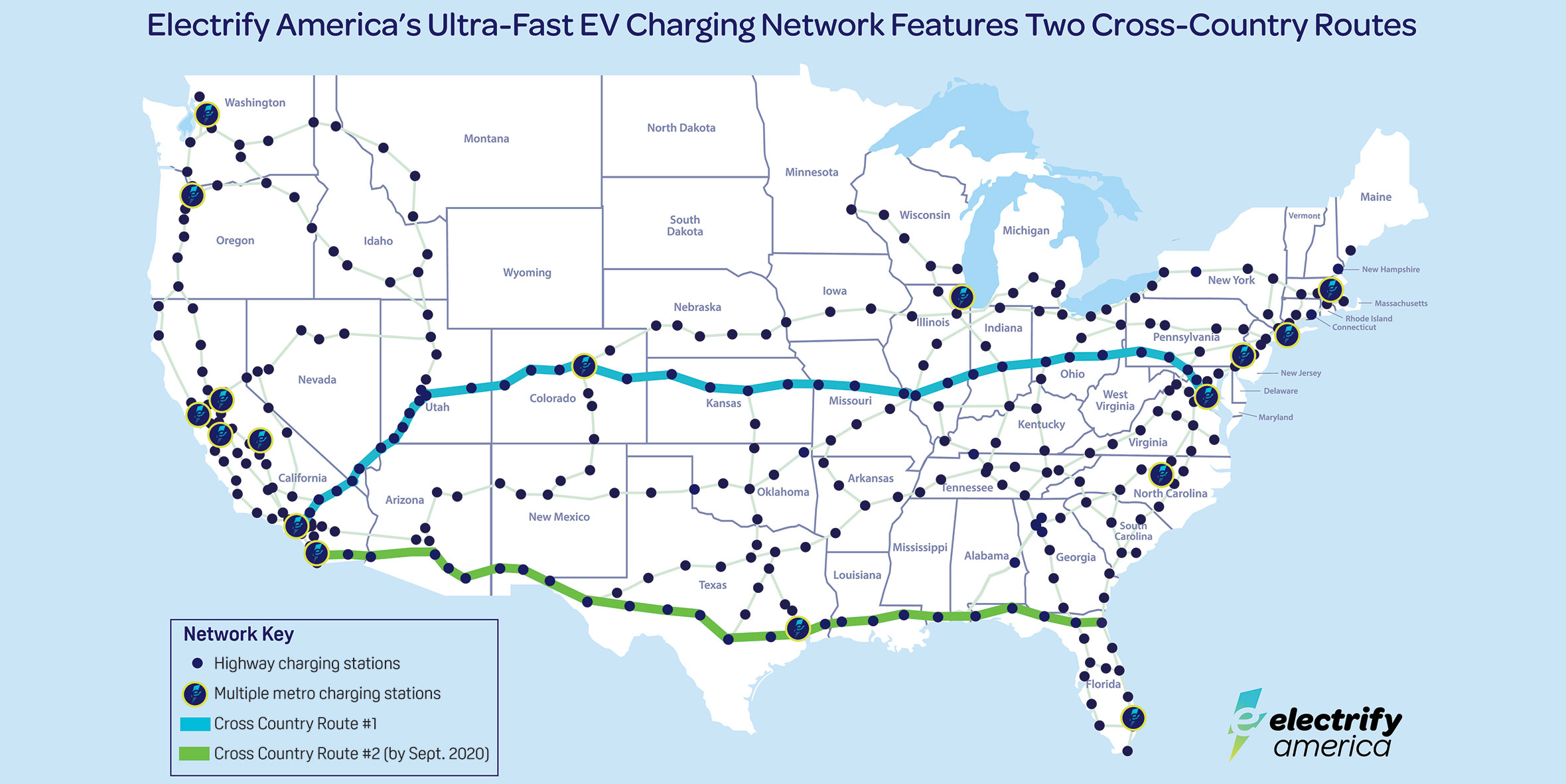 Users of Electrify America chargers still face technical challenges and reliability issues. The quest for plug-and-charge, a feature that allows chargers to recognize vehicles as soon as the plug is inserted and then seamlessly pay fees, is not yet fulfilled. Therefore, drivers still need to swipe credit cards, which too often fail to initiate a charge. An increasing number of Electrify America users make payments via the company’s smartphone app.

We have completed testing of Plug&Charge with two OEMs and expect to rollout the technology to the entire network by year end.

Nonetheless, a cross-country, fast-charging trip is now possible via Electrify America, which is an achievement.

The feat was accomplished by Electrify America two years after the Volkswagen subsidiary got started. The pace of its rollout is about twice as fast as Tesla’s Supercharger network. Electrify America charging stations are, on average, about 70 miles apart from one another.

Electrify America plans to complete a second cross-country route by the end of summer 2020. That will become the southern path, traveling from San Diego to Jacksonville, Florida, along interstate highways starting near I-10 and finishing along I-8. Routes along the east and west coasts are already available.

By the end of 2021, Electrify America plans to install or have under development approximately 800 total charging locations with about 3,500 DC fast chargers.

When you combine Electric America locations with what’s available via Tesla Superchargers, Ionity, ChargePoint, and other, the outlook for all-electric highway road trips is brighter than ever.

Of course, not every charging event is without hiccups. But the combined nationwide network of EV fast-chargers is getting better and more reliable every day.