Tesla has released a new, more powerful solar panel and slashed the price of its solar installations as it attempts to ramp up its energy division.

Over the last few years, Tesla has revamped its solar business.

After purchasing SolarCity, they slowed down installations and restructured the company as they integrated the operations into their own.

Tesla has launched the solar roof tiles, but the company is also trying to ramp up its solar panel installations, which are still the bread and butter of the solar industry.

Last year, Tesla launched a new solar subscription under which homeowners can get a solar panel system installed at their home for no cost and no contract.

Furthermore, Tesla started solar price matching to be more competitive on the market.

Now Electrek has learned that Tesla is slashing its solar prices and using a new, more powerful solar panel.

As the time of writing, Tesla is still updating its solar panel configurator and the prices don’t make sense since a 11.34 kW system was listed at just $10,000:

But the website added a chart showing the prices for each different system size: 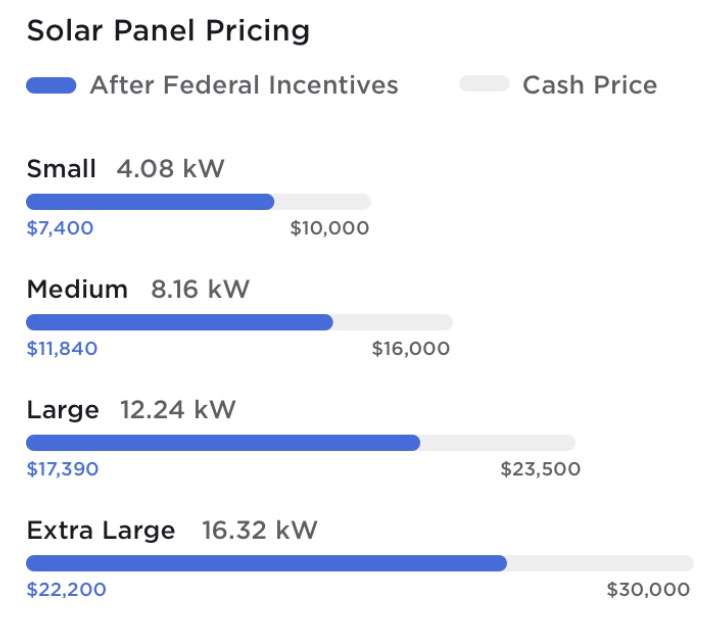 With the new solar panels, which are 10% more powerful according to a source familiar with the matter, Tesla’s medium-size solar system outputs now 8.16 kW and it costs just $16,000 before incentives or $1.96 per watt.

Prices vary by state and specific locations. More specific pricing is going to be available once the configurator is fully updated. We should have more information later today.

Update: Tesla has now updated the configurator and confirmed the new solar panel:

I was told that the price would be slashed by about 20% and the power output of the system would be about 10% more powerful, thanks to the new solar panel.

Again, the configurator is not completely updated just yet, but it looks like the price cuts could be even greater than 20% on a per watt basis.

My bet is that since Tesla started offering price matching last month, they figured that they weren’t quite aligned with the market.

This is going to make Tesla much more competitive in the solar business on top of the price matching.

We should have more details about the new solar panel offering from Tesla later on Friday.