When an out-of-warranty EV fails, who you gonna call?

My friend Jim loves his 2014 Mercedes-Benz B-Class Electric. It only has 87 miles of range, but Jim estimates that about 70% of his family’s annual vehicle miles are on the B-Class Electric. That’s why it was so disappointing when last year the motor started whining so severely that the car was nearly undrivable. To add insult to injury, the local Mercedes-Benz dealership quoted $18,000 to get it fixed by replacing the entire powertrain.

I felt somewhat responsible for Jim’s predicament. Jim spent his 30-year career at the Environmental Protection Agency before retiring a couple of years ago. I helped Jim think through his decision about getting an EV in late 2014. There weren’t many choices at the time. Ultimately, he was swayed by the style and comfort of the B-Class powered by a Tesla powertrain.

A few months ago, he wrote to me:

Here’s my problem in a nutshell. I’m out of warranty (four years or 50,000 miles). And perhaps out of luck. Maybe we should drive it until it dies.

I need to investigate what exactly the whine is. Is it a bearing problem? Will the car suddenly die? Who knows?

The Mercedes-Benz dealership subsequently reduced the repair quote to $12,000, giving Jim the motor at cost and 20% off labor. But that was still pricey for the six-year-old 87-mile EV.

After scouring the internet, Jim discovered that a surprising number of the few thousand cars with early Tesla powertrains were experiencing similar problems. The three problematic models are first-gen Roadsters, Toyota RAV4 EVs, and Mercedes-Benz Electrics. Jim sent me these two links:

I replied with the names of Bay Area EV-loving mechanics to get a second opinion. And he discovered in one of the forums that QC Charge in San Marcos, California (about 30 miles north of San Diego) does repairs on those three early EVs that all use nearly identical versions of Tesla’s powertrain.

I’m going to ship the car to QC Charge and have them service the motor. The total cost with shipping is around $5,000. Hopefully, it is repairable, and we buy some time to consider what our next EV will be.

Tony Williams, the founder of QC Charge, started the business in 2012. One of his first products was an aftermarket quick-charge port that allowed owners of the Toyota RAV4 EV to charge just like a Tesla Model S. The two vehicles use a similar powertrain — but Toyota decided not to include a quick charger on the electric RAV. (Only 2,600 of those Toyota SUVs were built. QC has equipped hundreds of them with its quick-charge hack.)

QC Charge currently offers dozens of EV adapters, extension cables, and kits. And they do a robust business of repairing those Roadsters, RAVs, and B-Class Electrics. “Last count I have 17 cars out front,” said Williams, who has repaired several hundred EVs.

He explained the situation that Jim and others driving out-of-warranty EVs might face.

The mechanic in a Toyota shop or a shop is not going to pull apart a motor. That’s not their normal business.

They troubleshoot the cars, and they replace the parts. That’s their bread and butter. That means that for the motor, for instance, there could be a $3 part broken on it, a speed sensor or something, and they’ll replace the entire motor.

Williams recounted multiple stories of owners of the three Tesla-powered models who had entirely given up hope on cars that had completely stopped moving. Dealerships told these owners that the only option is a new motor. But Williams was able to get the vehicle running in 15 minutes with inexpensive parts on his shelf.

Here’s how QC diagnosed Jim’s car, which was not difficult. Take note that Tony William owns four Teslas, all bought new from the company. He’s a fan of the company’s constant push toward innovation. Our phone conversation was delaying him from taking his first drive of a Model Y that just arrived at his shop.

It’s a Tesla-related design problem. The inductive motor eats up the bearings.

Electromagnetic energy needs someplace to go, so it needs a discharge path. There’s a discharge charge path on the motor, but it’s pretty inadequate. 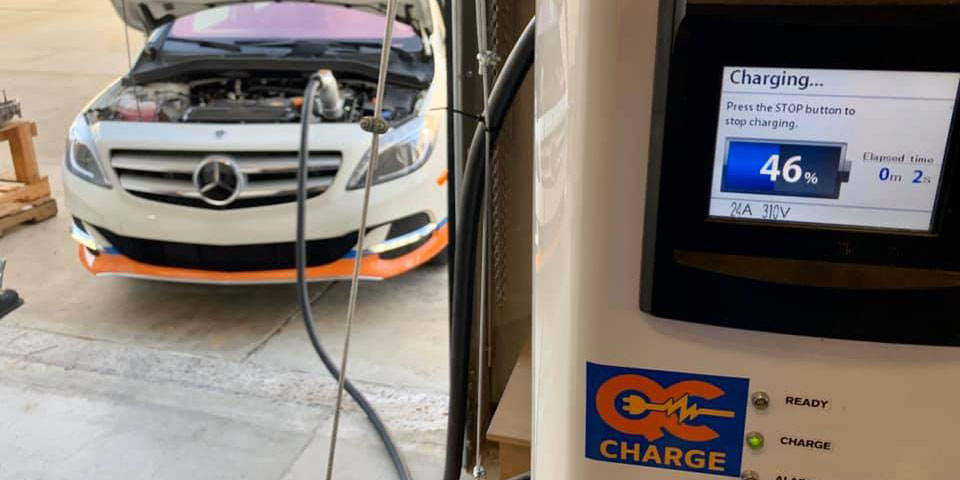 Williams said there are only two bearings ­— one on each end of the motor — each measuring about two or three inches in diameter. The bearings are the only moving parts of the motor.

He explained that the bearings also take the brute impact of driving over bumps and potholes — and they can be inadequately lubricated after years of use.

These photos show the heart of the electric motor, the “rotor” that spins to make power. The most prominent faulty bearing can be seen in these photos of the Tesla GEN1 motor used in 2012-2014 Tesla Model S and Toyota RAV4 EV, as well as the  Mercedes-Benz B-Class Electric Drive. The rotor weighs 60 pounds.

Williams is fully aware that the EV market will soon grow to the point that there will be thousands, and then millions of electric cars coming off warranty ­— and neither traditional automakers nor Tesla will be able to cost-effectively help all these owners with out-of-warranty cars.

We hope to franchise a model for repairs of electric vehicles with all the things we’ve learned in the last eight years. We do heavy maintenance right down to the component level. A normal repair shop does not do that.

Williams said that he is “actively working” to set up franchises, train them on EV repair, and provide support of deep-level expertise and parts as necessary. What I see in Williams’ plan is the beginning of a nationwide network of independent electric-vehicle repair specialists that needs to develop for the burgeoning EV world.

Meanwhile, I heard from Jim a few days ago.

We got the Mercedes back on Saturday. No whining sound!

Jim said the bill was going to be a fraction of what the dealership was going to charge. He added, “Hopefully we’ll get another five years out of the car.”