Tesla has released new data showing that battery degradation over high mileage is limited, which is good news, but we have obtained more data that shows that not all of Tesla’s battery packs are created equal.

Battery degradation, which represents the loss in capacity and range over time with increasing mileage, is one of the biggest concerns of new electric vehicle buyers.

We have occasionally seen some interesting data about battery degradation gathered by Tesla owners but rarely anything directly from Tesla.

This week, the automaker released its ‘2019 Impact Report’ and as part of it, Tesla shared a rare chart showing energy retention.

It only includes Model S and Model X vehicles up to 200,000 miles, which have been on the road for longer than Model 3 and Model Y: 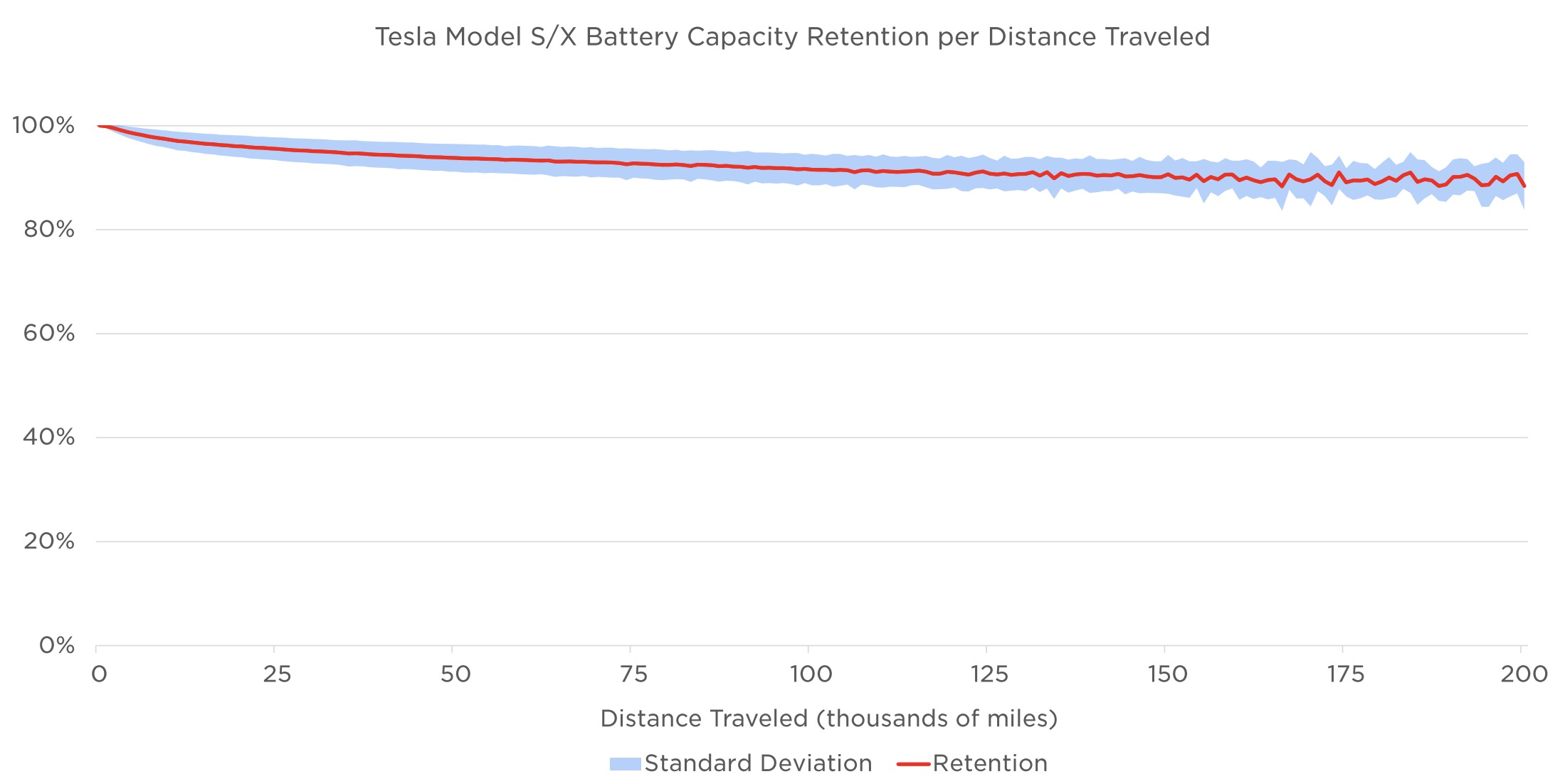 It shows around 10 to 15% battery degradation between 150,000 to 200,000 miles, which is in line with what owners have reported in previous crowdsourced reports.

However, the data is about all Model S and Model X vehicles, but things get more interesting when you break it down by different battery packs.

Tesla doesn’t release this data, but the company had a massive data leak back in 2017.

I can’t go into more detail right now about the leak because it’s not my story to tell, but a source who had access to the data figured out that Tesla’s 90 kWh battery pack degraded much faster than the 85 kWh battery pack that it was replacing.

They shared the data with us and we represented it in this chart that we first shared as part of our latest episode of the Electrek high-mileage EV series: 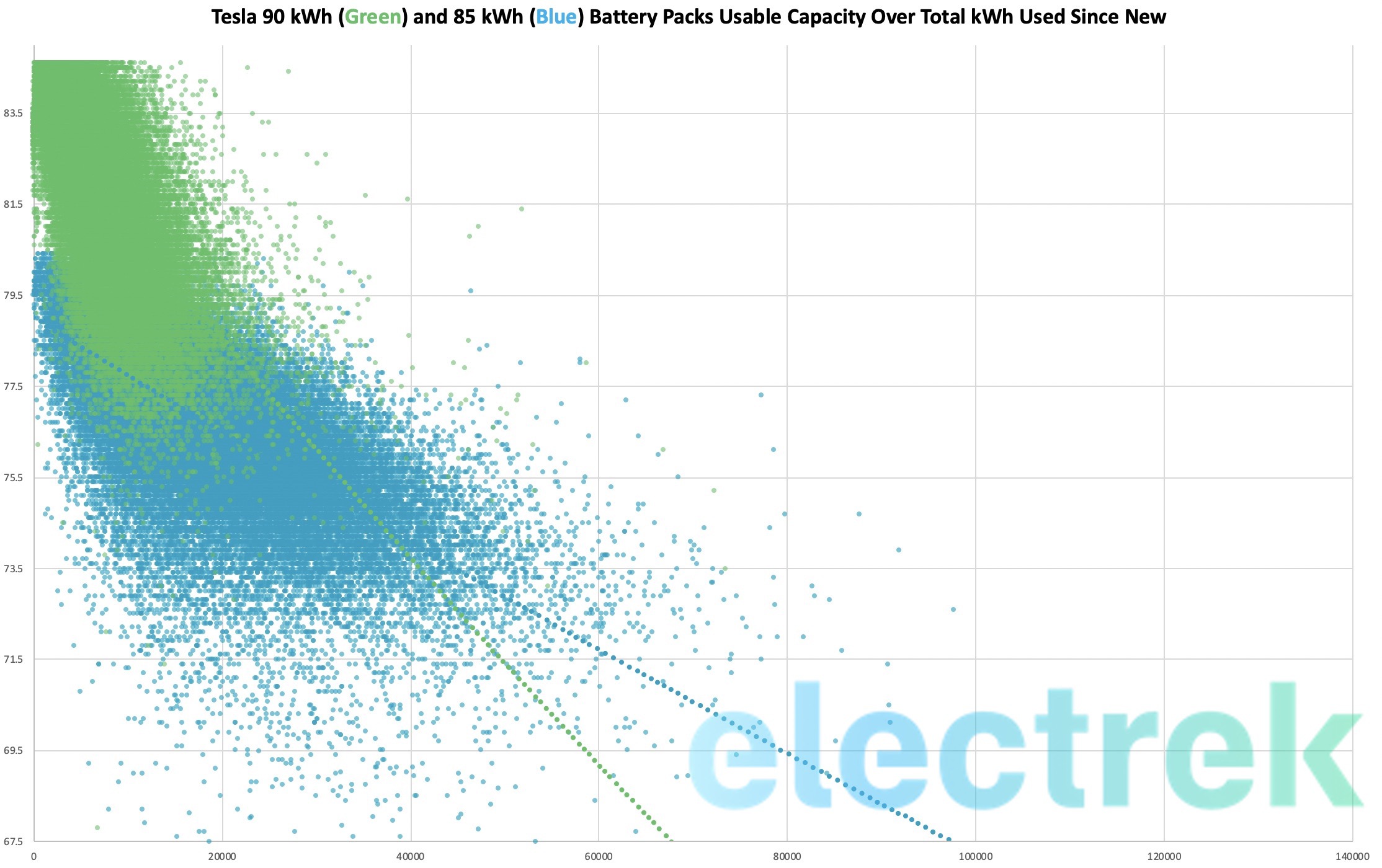 People had a lot of questions about the data and what it shows, so we decided to go into more detail here now.

Each point on this chart represents a Model S or Model X in Tesla’s customer fleet at the end of 2017. We have tens of thousands of data points directly from Tesla, which is arguably the best data ever released about Tesla battery degradation.

The ‘Y’ axis represents the current usable battery capacity of the car in kWh pulled from Tesla’s own battery management system and the ‘X’ axis is the total use of the battery pack in kWh since the vehicle was new.

This is something that Tesla Model S and Model X 90D owners have been reporting anecdotally for years, but now we have the data to back it up.

Tesla’s own chart looks really good and I believe it is accurate, but I think it’s also interesting to look at different battery packs.

There’s no doubt that the degradation in the 90 kWh battery pack is much more aggressive, but there are a few silver linings.

Over time, the degradation of all battery packs, including the 90 kWh packs, levels and degradation slows down.

Therefore, while the 90 kWh drops much faster at first, it should still be able to last a long time and it’s likely why it is not dragging down Tesla’s average so much.

Secondly, Tesla discontinued the 90 kWh battery pack and replaced it by the 100 kWh.

While we don’t have the same amount of data on the newer battery pack, it doesn’t seem to degrade as fast as the 90 kWh pack.

As for the “why”, the answer seems to lie with the chemistry.

Tesla’s battery pack design didn’t change much from 85 to 90 kWh, but Tesla achieved a greater density with a new chemistry, which seems to be a worse chemistry when it comes to longevity.

After the 90 kWh pack, we have seen Tesla with a renewed focus on longevity with recent chemistry developments for its “million-mile battery”.

I think Tesla is going to be good with battery degradation going forward, but it’s still a bummer for 90 kWh battery pack owners. Tesla had replaced some of those packs, but owners with replacement packs are reporting the same problem.

Maybe Tesla should consider replacing the packs with newer 100 kWh packs instead of 90 kWh packs? What do you think? Let us know in the comment section below.