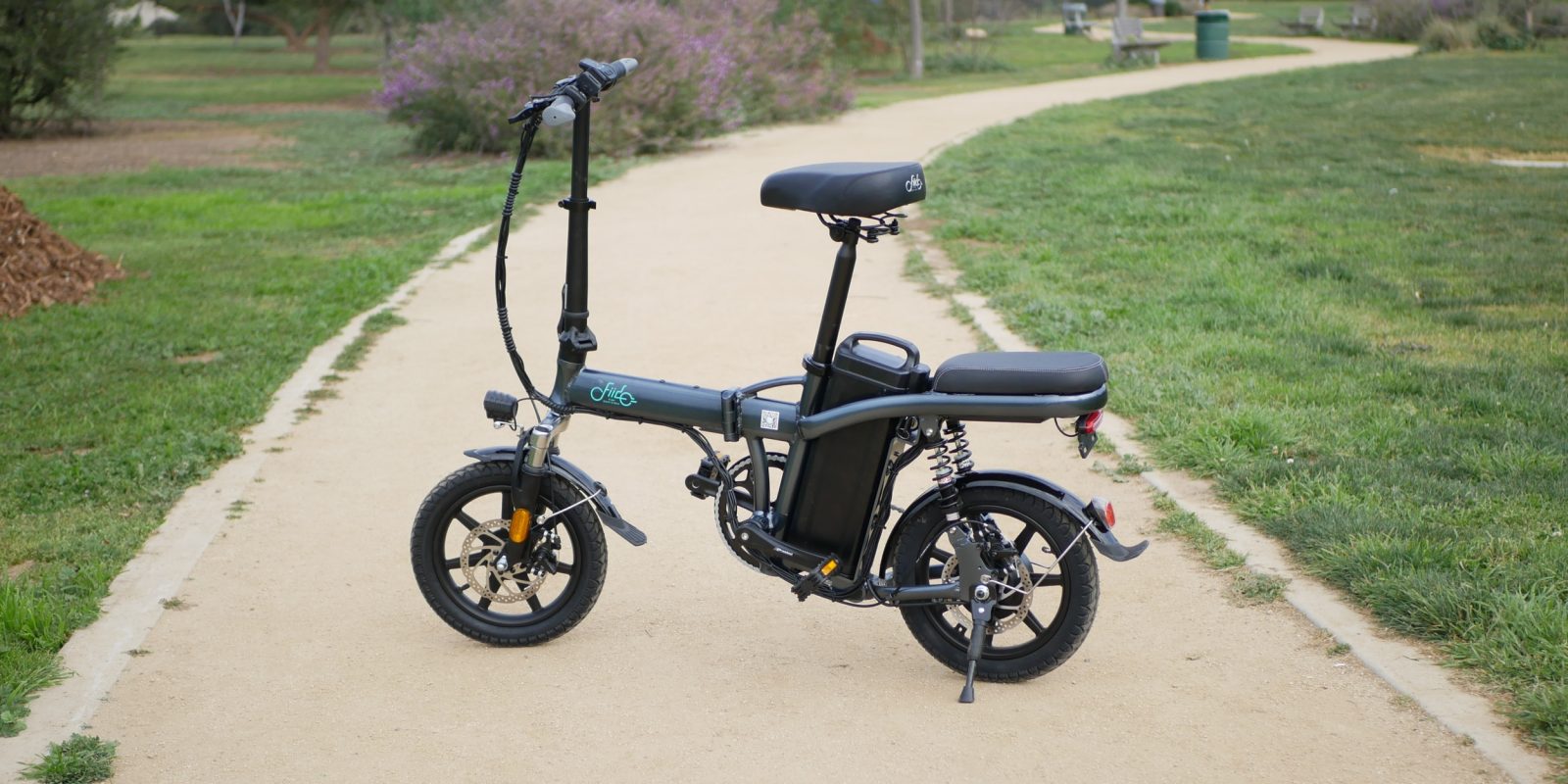 The Fiido L2 doesn’t look like a standard e-bike, at least not the kinds that we are used to in the West. Instead, it adopts a design that has become immensely popular in East Asia by sporting smaller wheels, moped-style suspension, a huge battery, and seating for two.

After testing out the e-bike myself, I can see why the design is so popular over there, and why it just might work well here in the West as well.

At first glance, you might brush off the L2 as an oddity.

But something about it was intriguing enough for me to buy one and test it out.

Whatever it was, I’m really glad I did.

Because despite not looking like much, the Fiido L2 is an awesome little e-bike with some serious utility potential for urban riders.

Check out my video review below, then keep reading to get all the fun details about this awesome little e-bike.

What makes it so special?

First of all, let’s look at the differentiators. There are tons of folding e-bikes out there, but very few offer full suspension. The Fiido L2 has dual rear shocks and a spring saddle, which combine with the standard front suspension fork to offer a nice ride even on dirt trails.

Then consider the battery. At nearly 1,000Wh, it’s twice the capacity of most entry-level e-bikes and three or four times the size of many ultra-budget e-bike batteries. I recently reviewed another small folding e-bike at almost the same price as the Fiido L2, yet the L2 has triple the battery capacity. 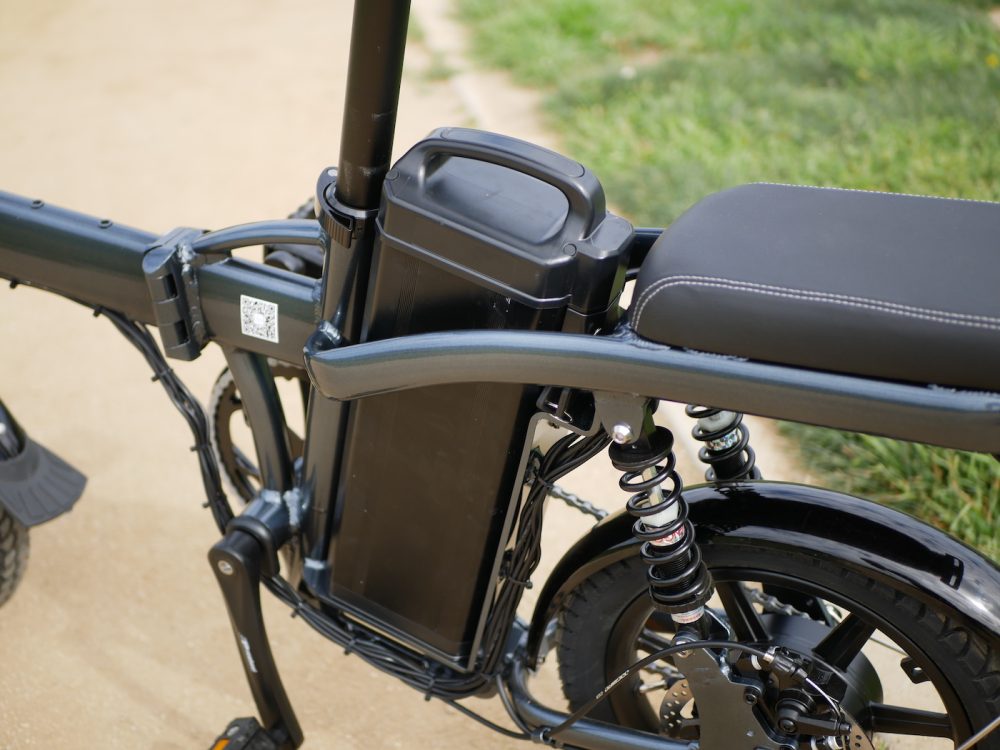 Next, it’s designed for utility with a rear rack that also sports a padded seat. Not only can you strap a cargo box back there, but you can carry a passenger as well. The downside is that there are no footpegs – which honestly seems like an oversight to me. But the passenger can simply put their feet on the rear axle stubs, which are approximately where pegs would go anyways. It’s not an ideal solution, but we’re talking about a $739 e-bike here, I guess sacrifices needed to be made. I’ve got half a mind to install my own $14 Amazon folding foot pegs, which would solve that problem.

The Fiido L2 also folds down to a compact size, meaning you can easily stow it in a car trunk or back seat, or you could carry it onto a train or bus. With folding handlebars, frame and pedals, the bike can compress into a convenient size for stowage.

Despite the low price, I’m also impressed that Fiido still managed to stick a few creature comforts onto the bike. The Fiido L2 includes an electric horn, fenders, cell phone holder with USB charger, integrated lighting, and even disc brakes.

And the build quality is actually solid. And I’m not just saying that. This isn’t a paid review (Electrek doesn’t do those). It’s actually the opposite since I paid for this bike. And I can tell you that it is built well, with proper welds and a folding mechanism that feels like it belongs on a German nutcracker. Sure, some parts are going to break with enough use – such as those cheap fenders or plastic pedals (which are all easily replaced), but the critical parts seem well made. 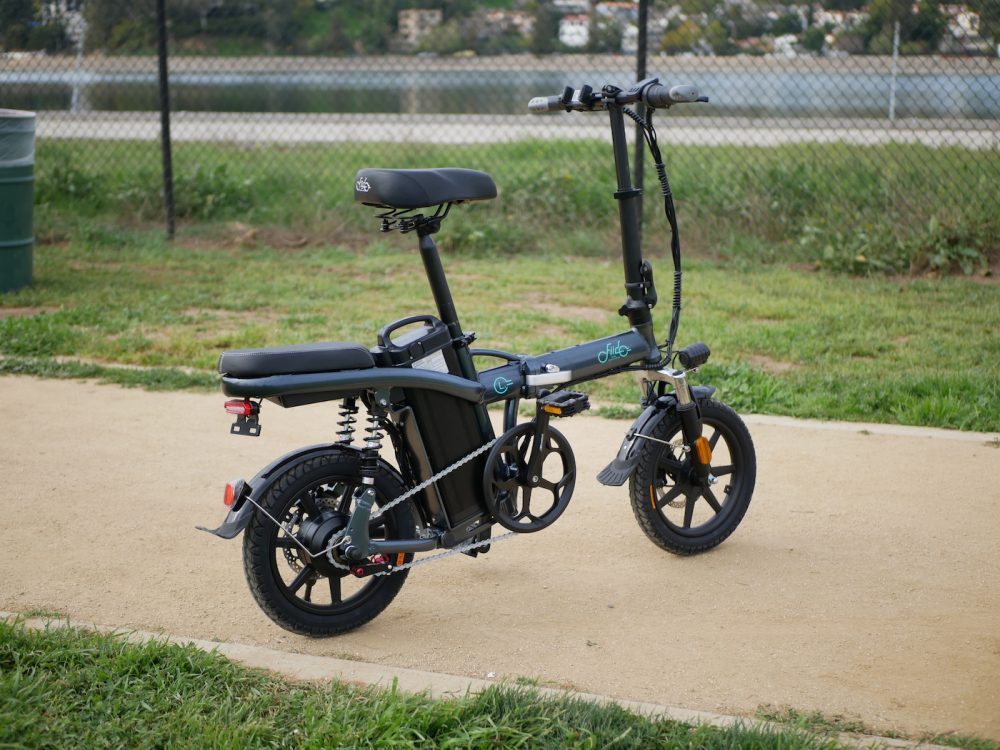 The Fiido L2 shares something else in common with all other e-bikes: it isn’t perfect.

My biggest complaint is the limited top speed.

The speed is capped at 25 km/h or 15 mph. That’s a bit slow for me. It works, but I always find myself wanting more speed. A controller swap would do it, but most people don’t want to get that technical (or void their warranty).

The advantage of the slow speed is that it boosts range. On throttle-only riding, 15-20Wh efficiency can be expected, meaning 48-65 miles of range from that nearly 1 kWh battery. With pedal assist, 10-15 Wh or lower is reasonable, meaning you could theoretically approach 90-ish miles of range if pedaling hard enough. But since most people will use the Fiido L2 like a moped and treat the pedals as footrests, 50 miles of range is a better estimate on flat ground. 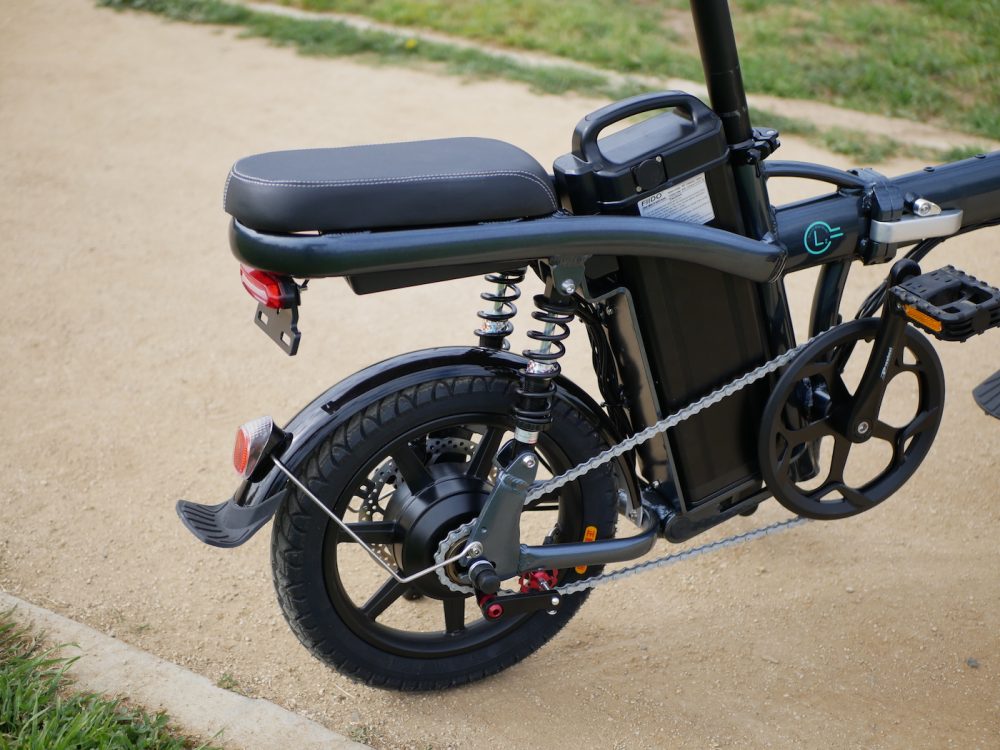 Next, the wheels are smaller than I’d like. At 14-inches they’re the minimum that I’m comfortable on for longer city trips, and even then I’d like 16-inch wheels if possible. That being said, the small size helps keep the bike compact when folded, and as long as you don’t have big potholes to deal with, you really don’t notice the wheel size very much on smooth, flat ground.

There’s also no digital display, only an LED bulb display, which tells you your battery capacity and PAS level. It’s similar to the display on the popular RadRunner e-bike, and is your basic, no-frills e-bike display that gives you the bare necessities of ride info – with precise speed not being one of those necessities. 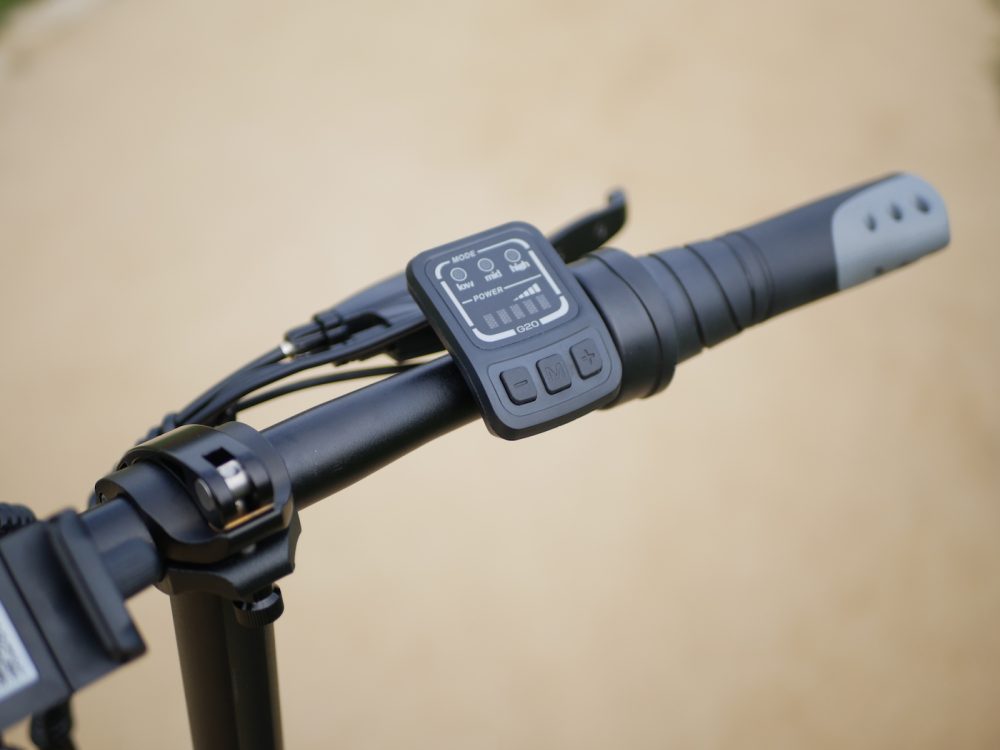 Lastly, there are no gears; it’s a single-speed e-bike. Again, that won’t matter for people who treat it like a little motorbike. For pedalers, you won’t be able to downshift on hills, though I think Fiido did a good job of compromising on the gear ratio. I can pedal at almost the top speed of the bike (which isn’t very fast, remember) but low speed pedaling isn’t uncomfortably slow either. And the motor is powerful enough that you can maintain a slower pedal cadence on big hill climbs since you have that extra electric assist.

It’s not perfect, but it’s much better than other small-wheeled single-speed e-bikes I’ve tried.

So who is the Fiido L2 e-bike for?

If you’re trying to get your fitness on, this isn’t the bike for you. It’s a low-speed e-moped that channels its inner motorbike vibe. That means you’re not going to want to go out and do a long fitness ride on something like this.

Rather, this is very much an urban utility e-bike. Think something like the Radrunner from Rad Power Bikes, except cheaper and weirder. It could be good for hauling a friend, bringing a child to school, or just carrying groceries and other gear. 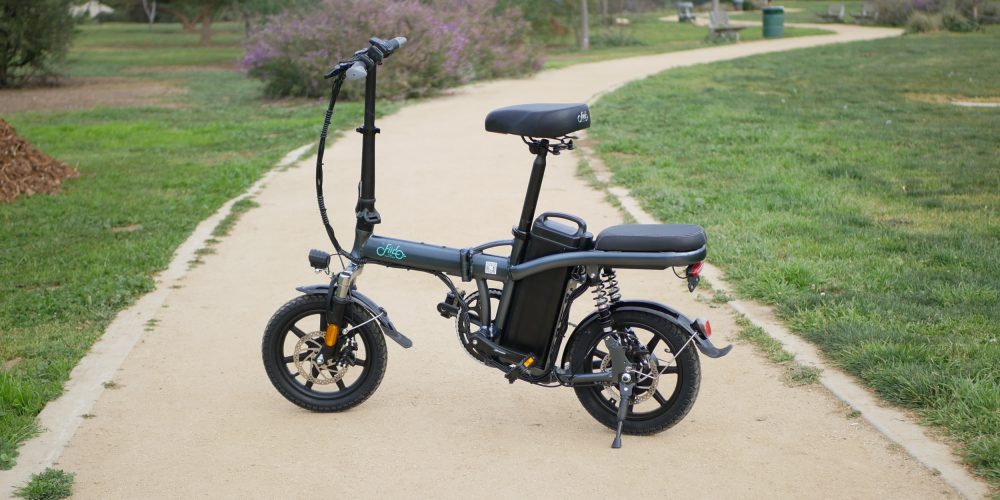 The suspension makes it comfortable for one or more riders and opens up the possibility of light off-road use. The integrated lighting keeps it visible at night and the folding design means it can squeeze into lifestyles of urban commuters and apartment dwellers.

It’s not the right e-bike for everyone, but it could be right for many people trying to navigate their own concrete jungles. And if millions of commuters across East Asia have found success with this style of e-bike, then perhaps we should be giving small utility e-bikes a second look over here.