Thanks to satellite and tide gauge data, we know that sea level is rising about 3.3 millimeters (0.13 inches) a year, a rate that grows by another 1 millimeter (0.04 inches) per year every decade or so. Each year, global warming is currently adding about 750 gigatonnes of water to the ocean — enough to cover my home state of Texas about 1 meter (more than 3 feet) deep. We can’t really eyeball a few millimeters of sea level rise a year just by looking at the ocean because of waves, tides, etc. But we can definitely see the effects of it, both short- and long-term.

According to Buis, Willis says a good rule of thumb is that every inch of sea-level rise results in the loss of about 2.5 meters (100 inches) of beach.

So what are the options? Either spend a lot of money to combat it with things like higher sea walls or abandon ship and move.

Indonesia is going to move its capital from Jakarta, population 10 million, due to sea-level rise — think about the sheer enormity of that decision.

The Florida Keys in Monroe County, as Electrek previously wrote in December, have admitted that they can’t save whole neighborhoods because it’s cost-prohibitive. The county suggests residents get boats. It’s the third most vulnerable county in Florida.

Have a read of Buis’ blog, and watch the summary video below.

While this is a step in the right direction, and a clear sign of how far our movement has come, what is achieved by this task force is much less important than what we do as a movement in the coming months. We must keep building our movement and raising our voices loudly for a Green New Deal until we win it. The work has just begun.

The other members of the task force are: 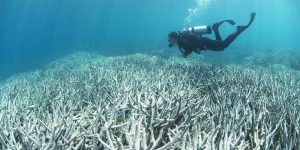 Scientists in Australia have developed a lab-grown microalgae that is more tolerant to heat.

And that microalgae may help coral reefs fight bleaching, which occurs when rising sea temperatures make corals expel the algae that live inside them. This then starves the coral, turning it white.

The research team says that injecting the heat-tolerant microalgae into the coral may save the reefs.

Professor Madeleine van Oppen, of the Australian Institute of Marine Science and the University of Melbourne, said:

We found that the heat-tolerant microalgae are better at photosynthesis and improve the heat response of the coral animal. These exciting findings show that the microalgae and the coral are in direct communication with each other.

They will test the algal strains across a range of coral species.

As Electrek reported at the end of March, Australia’s Great Barrier Reef suffered its third mass bleaching in five years, so a breakthrough to save coral reefs is desperately needed.

Movin’On’s mission, which was founded by Michelin in 2017, is “sustainable mobility as a driving force for human evolution.” It rallies corporations, startups, government bodies, academia, NGOs, and international organizations.

By mobility, Movin’On means transportation, but it also encompasses accessibility and anything that pertains to movement, including telecoms.

Movin’On Summit 2020 was due to take place at McGill University in Montreal in June, but you-know-what happened.

So Movin’On is movin’ online (sorry) and will become a cool interactive digital event. It will take place on June 3 and June 4. On June 4, the Movin’On Startup Challenge Grand Finale will take place from 8 a.m. to 10 a.m. ET online. Here’s how it’s going to work:

10 startups have been selected and will be invited to pitch live to a jury of experts in Movin’On categories (preserving resources, safer and more accessible mobility, etc.). Each presentation will last for no more than 2 minutes and will be followed by one question from the audience and one question from the jury. The jury and the audience will then be able to vote for their favorite startup. At the end, the 5 winners will benefit from tailor-made programs and support (skills sponsorship, incubation, acceleration, coaching, visibility and networking) to develop their innovation.

The public can sign up here to participate in the finale on June 4, and check out videos of all the finalists here. Here’s just one example:

The Aquarium of the Pacific in Long Beach, California, had a chat on Wednesday with Richard Somerville, a climate scientist and one of the authors of the most recent Intergovernmental Panel on Climate Change (IPCC) report, about “Climate Change Science: How Can Sound Science Inform Wise Policy?” Somerville wrote The Forgiving Air: Understanding Environmental Change, which makes understanding climate change accessible.

There are silver linings to the pandemic lockdown, and one is the ability to access things we wouldn’t have access to otherwise. Here’s Somerville’s informative talk:

Are you a young entertainment professional or student who wants something exciting to do today? Then we’ve got just the thing for you — and guess what? It’s online! Surprise!

The day will begin with a keynote address with writer/director/producer Scott Z. Burns (The Report, Contagion, An Inconvenient Truth) in conversation with writer/producer Dorothy Fortenberry (The Handmaid’s Tale, The 100).

The featured panel, “Producing a Greener Hollywood,” will explore how Hollywood has mobilized around climate change with executives from HBO, the Sierra Club, and the National Wildlife Federation, followed by three blocks of hourlong workshops.

Workshop topics include sustainable storytelling, the future of live events, documenting the crisis, and a look at the ecological crisis through a racial justice lens.

Tickets are donation-based — pay what you want, or can — and can be purchased here.

Here’s our weekly roundup of bright and resilient young faces fighting for our planet with virtual #FridaysForFuture. Say hello to Mulindwa Moses in Kampala, Uganda:

And Aldo Pizarro in Santiago, Chile:

#ClimateStrikeOnline
I didn’t bring my sign with me since the weather threatened rain and I didn’t want to risk it getting water damaged. So here is me posing on a rock saying; we want to #DefendTheDefenders and demanding #ClimateJustice from our government.#FridaysForFuture pic.twitter.com/WYzpmXc3q7

A post shared by Fridays For Future Italia (@fridaysforfutureitalia)

FridaysForFuture also refreshed its website, which you can check out here. Have a safe, peaceful weekend.