The 2019 United Nations Framework Convention on Climate Change (COP25) kicked off in Madrid on Monday, where delegates from across the globe are working to come up with a concrete plan to implement the Paris Agreement. One topic that will be seriously considered is using carbon credits. Quartz gives an example:

Carbon credits could allow a polluting country far from a tropical forest (say, Norway) to close the gap in their climate goals by paying to preserve forests in a place like the Amazon basin. 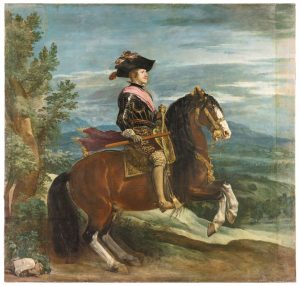 But the details and the pitfalls will have to be worked out. And they need to be. The World Wildlife Foundation (WWF) and Madrid’s Prado Museum used art to illustrate what might happen if the world doesn’t come up with a good plan. They selected four masterpieces from the Prado’s collection to highlight what climate change could look like. In the main photo above, Felipe IV a Caballo (Philip IV on Horseback) by Diego Velázquez is used to illustrate rising sea levels (original image on the left).

To check out the other three images by Francisco de Goya, Joachim Patinir, and Joaquín Sorolla, have a look at the BBC’s display of the before-and-after images here.

Yet more statistics that show how vital it is for the UN climate summit in Madrid to be a success: average temperatures look set to make 2010-2019 the warmest decade on record.

The World Meteorological Organization (WMO) says carbon emissions are the cause.

On a day-to-day basis, the impacts of climate change play out through extreme and ‘abnormal’ weather. And, once again in 2019, weather and climate-related risks hit hard.

Heat waves and floods which used to be ‘once in a century’ events are becoming more regular occurrences. Countries ranging from the Bahamas to Japan to Mozambique suffered the effect of devastating tropical cyclones. Wildfires swept through the Arctic and Australia.

Christian Aid’s Dr. Kat Kramer said, according to the BBC:

Now we know that global temperatures are rising to record levels and without action we can expect more climate suffering. It’s vital we phase out fossil fuels as fast as possible.

The good news is this is a timely wake-up call at the start of the COP25 climate summit in Madrid. Delegates have no excuse to block progress or drag their feet when the science is showing how urgently action is needed.

Can someone please send this report ASAP to the new US secretary of energy Dan Brouillette, who declared this week that coal has a “bright future”?

The Florida Keys are in Monroe County, and Monroe County officials have this week said out loud what everyone was already thinking. Roads, businesses, and homes in the Florida Keys will be claimed by the sea in just 20 years as the sea level rises due to climate change.

After initially discovering that it would cost more than $1 billion to raise 300 miles of roadway in initial studies, county officials have said that it won’t make economic sense to save certain neighborhoods.

According to Miami’s CBS 4, Monroe is discussing replacing roads with boats.

“We are surrounded by water. We have hundreds and hundreds of [miles of] shoreline, and it comes in from all sides. You cannot build seawalls around the islands. No. 1, it would be way too cost prohibitive and it wouldn’t necessarily work,” Hagg said.

The study is expected to wrap up in late 2020. Decisions on what roads to save will then be debated.

Assuming the county finds funding to do all this, the soonest the Keys would see construction to raise roads is likely 2023 — barring no legal fights.

MIT and Climate Interactive released a new simulator this week that “shows how your choices affect annual greenhouse gas emissions, global temperature rise, and energy costs over the next 80 years.”

Axios created a simplified version of that tool, which presents “nine questions on everything from carbon dioxide prices to land management.”

They describe the tool as such:

Think of it as choose your own adventure, climate and energy style. It’s like the books you may have read as children — but less fun and more complicated.

That’s a fair assessment. Quizzes are fun, but there’s a lot at stake with this one. You can take the quiz here.

I completed the quiz and answered aggressively in favor of promoting green energy and reducing fossil fuel emissions. And as Axios summarized:

The biggest upshot of the simulator shows that cutting emissions needs to be first about reducing the world’s use of fossil fuels, instead of merely ramping up cleaner forms of energy.

Climate activist Greta Thunberg arrived in Madrid yesterday to join thousands of other young people in a march to demand that world leaders gathered there for the UN climate summit take action.

She was greeted with a swarm of cameras and people, and made a joke about “sneaking in” to Madrid:

I successfully managed to sneak into Madrid this morning! I don’t think anyone saw me…
Anyway it’s great to be in Spain! https://t.co/8SfqpqbUXG

Good news from the UN climate summit: “Officials directly involved in the negotiations said that despite a few setbacks, the technical negotiations were progressing,” according to the Associated Press.

Thunberg took part in a sit-in at the summit, and there was a huge march later in the evening:

Silent climate school strike by #FridaysForFuture within #COP25. The most powerful and strong statement you can imagine. The young generation not accepting the politicians inaction. They need all our help, every day. pic.twitter.com/RcDZN9THEi

HAPPENING NOW:
Madrid is crowded for the #COP25 demonstration. We won't turn our back to leaders stealing our future by ignoring the climate crisis. The climate justice movement is bigger and closer than ever! #WeAreUnstoppable pic.twitter.com/2gLKR5DVVG

Meanwhile, although the US did not send any high-level administration officials to the UN climate summit, an alliance of US states, cities, academic institutions, and companies opened the US Climate Action Center at the talks yesterday. It’s funded by Bloomberg Philanthropies.

On November 27, Electrek reported that there was a chemical explosion at TPC Group chemical plant, which makes products for chemical and petroleum companies, in Port Neches, Texas.

The Port Neches explosion occurred six days after the Environmental Protection Agency (EPA) announced that they were ending regulations that require chemical plants to provide the public with information about potential risks.

This week, the city of Port Neches issued an order encouraging its residents to evacuate voluntarily due to concerns over air quality.

Port Neches issued the voluntary evacuation order late on Wednesday after elevated levels of the chemical butadiene were detected. Jefferson County emergency management officials said the elevated levels did not pose a serious health risk, but could cause dizziness, nausea, headaches, or irritation to the eyes and throat.

Butadiene is a chemical used to make synthetic rubber and other products.

Butadiene is classified by the US Occupational Safety and Health Administration (OSHA) as a human carcinogen. Further, the Canadian government considers it a danger to the environment and to human health.

Canadian author, social activist, and filmmaker Naomi Klein doesn’t mince words when it comes to explaining the climate crisis. Have a watch of her video op-ed below and let us know what you think.

‘They are true planetary arsonists’ — Journalist and author @NaomiAKlein explains how Trump and other ‘strongmen’ leaders are perpetuating the climate crisis pic.twitter.com/Arhoe9WBfq

In this week’s Jane Fonda watch: Fire Drill Fridays mobilized for climate justice and immigrant rights today. They protested at Franklin Square in Washington, DC. “The latest estimates predict as many as 200 million climate refugees by 2050.”

It’s #FireDrillFriday! @Janefonda is kicking us off with a quote from #COP25 pic.twitter.com/FKCswgxenP

Fonda was joined, among many others, by Taylor Schilling and Kyra Sedgwick. Greenpeace and Extension Rebellion also took part in a march to protest in front of banks that still fund fossil fuels such as JPMorgan, and WellsFargo, and investment management corporation BlackRock.