Harley-Davidson might have underrated the LiveWire electric motorcycle, according to recent tests performed on the bike.

That’s what we are seeing from a video recently uploaded by the popular motorcycling YouTube channel Bikes and Beards.

But the company appears to have been a bit conservative with the ratings on the bike. That would run counter to much of the industry, where ratings are often somewhat ideal figures under perfect conditions.

Sean Kerr of Bikes and Beards got his hands on a Harley-Davidson LiveWire to test how well those factory-reported specs match reality.

Sean started by testing the 0-60 mph time, with his best launch landing at 3.02 seconds. That’s nearly bang on the manufacturer’s rating, but it was also cold and wet during his tests, which would have made the launch just a bit slower than optimum. For the 0-60 time, we can conclude that Harley was pretty much on the money. And that adds up, based on some Harley-Davidson LiveWire drag races we’ve seen.

Next came the top speed. Kerr didn’t actually show himself demonstrating the top speed, likely for the same reason I didn’t either in my review of the LiveWire: There aren’t any public roads in the US where you can hit those speeds, meaning you’d pretty much need to rent track time to do it safely and legally. Instead, he showed a video of the LiveWire being ridden by another rider with the speedometer clocking 115 mph (185 km/h). The footage is a bit shaky (which would make sense at 115 mph) and was filmed from the perspective of the rider, so it’s hard to verify independently, but the areas of the bike visible in the video all match a LiveWire. So if the footage is authentic, the LiveWire has a bit more top speed than we originally thought.

Next, Sean played around a bit with the regenerative braking on the bike next. He attempted to demonstrate recharging the bike by running the rear wheel with a treadmill. It appeared to work at first, until the treadmill motor quickly burned out under the strain of turning the motorcycle’s wheel and motor. He then tried to charge the bike with a gas generator resting on the pillion seat, but the charger threw a ground fault, rendering that silly attempt futile. 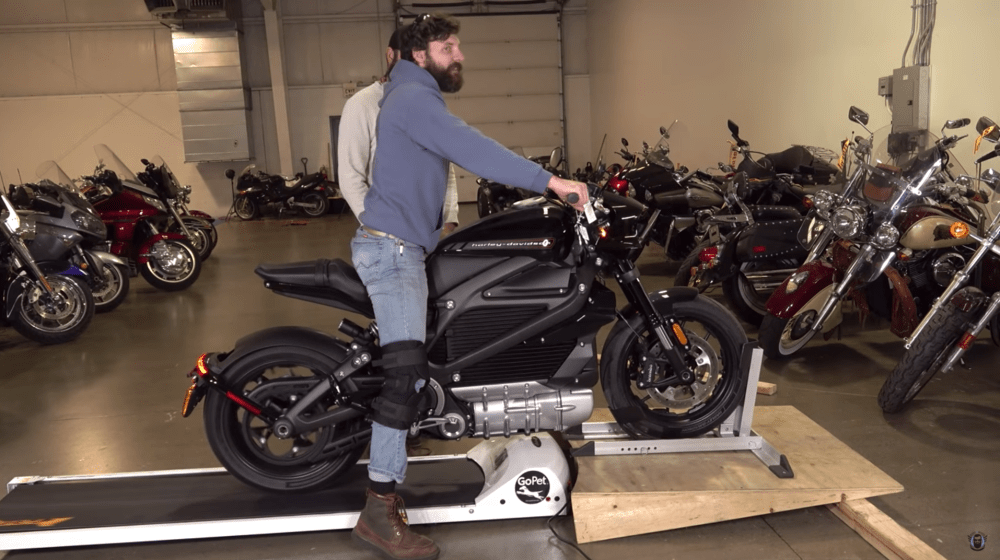 Attempting to treadmill charge a LiveWire with regenerative braking

After those shenanigans, range testing came next. To test mixed range, Sean charted a 55-mile course from Landisville, Pennsylvania to Havre De Grace, Maryland. The route would require 110 miles (177 km) of range on a single charge — a healthy amount further than the LiveWire’s rated 95 mile (153 km) mixed city/highway range.

Sean started out on the highway and found it hard to resist those powerful launches that quickly eat away at the battery. After just a mile and a half he had consumed 3% of the battery. After more time playing around in Power mode, he then switched to Eco mode and ended up making it to Havre De Grace with 45 miles of range remaining — for a 55-mile return trip. On the way back, he created a custom power mode on the LiveWire’s display, setting power to 0%, Regenerative braking to 100%, and throttle to 0%. As it turns out, 0% throttle and power don’t mean the bike can’t operate, they just mean the bare minimum amount of throttle and power that the bike will allow you to program.

Or as Sean put it:

It’s more efficient than even the economy mode. It’s should be the most efficient mode you could possibly have. Hopefully, that will get us back. 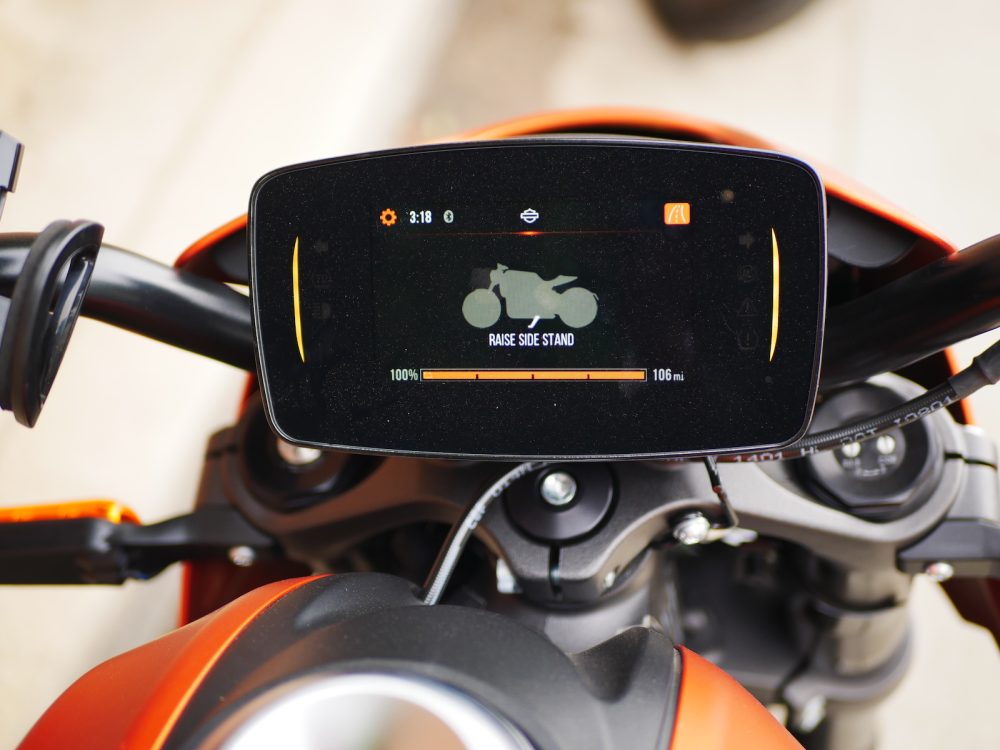 Using his custom super-eco mode, he rode back to his starting point sweating bullets as he approached the finish. The bike hit 0 miles of range with 1 mile left between Sean and his destination, yet the bike didn’t stop. Surprised that the bike was “running on empty,” Sean put the LiveWire in Power mode for the last mile to see what would happen and still successfully rolled into his destination with the bike continuing to function normally, despite reading 0% battery remaining. He decided to continue riding to see just how much farther he could go, though the bike soon began to lose speed and eventually dropped to around 5 mph (8 km/h) under full throttle — essentially a “limp home” mode.

But impressively, the LiveWire covered the entire 110 miles (177 km) distance on a single charge, and then kept going, even after hitting 0% battery.

Sean followed that hypermiling demonstration up with the opposite test: determining just how quickly he could drain the battery. In Power mode, Sean repeatedly rode the LiveWire through full throttle launches followed immediately by hard braking without the aid of regenerative braking, or essentially a series of back-to-back drag races. Sean repeated this nauseating launch sequence for 13.9 miles and used 41% of the battery, indicating a total range of around 35 miles (56 km) under hyper-unrealistic conditions. Not super relevant to most riders, but an interesting factoid nonetheless.

While some of the testing was obviously just for fun, it sheds interesting light on the capabilities of the Harley-Davidson LiveWire under various conditions, and indicates that the team in Milwaukee might have been a bit more conservative about the LiveWire’s capabilities than we originally thought.