The US Energy Information Administration released a report yesterday that says the “decline in last year’s coal generation levels was the largest percentage decline in history (16%) and second-largest in absolute terms (240,000 GWh).” Coal-fired electricity power fell to a 42-year low.

Electrek’s Take: We want to move away from the latter asap. It’s better than coal, but still a polluting fossil fuel. US coal-fired capacity has been declining since 2011 due to cheap natural gas. Renewable prices are now cheaper than natural gas, so expect to see the same pattern repeat itself, happily, with gas and green energy.

Bankrupt coal mine sues the US government

On February 20, Hartshorne’s Poplar Grove, a thermal coal mine in western Kentucky that was lauded as the first to open under Donald Trump’s pro-coal administration, filed for bankruptcy. The group cited technical challenges and market conditions because gas became cheaper than coal.

In 2017, Grant Quasha, then the CEO and managing director of Paringa, which owns Hartshorne, told S&P Global Market Intelligence:

The build-out of this newly emerging producer may not have been possible without the support of the Trump and [Kentucky Governor Matt] Bevin administrations.

Quasha is no longer CEO, and the company has been working to restructure its business since it declared bankruptcy, and applied for $2.3 million from the federal coronavirus relief program.

Hartshorne isn’t feeling as warmly toward the government now. It was denied the application for aid because it’s in the middle of a bankruptcy restructuring — and the Small Business Administration excludes companies in bankruptcy. So the company has filed a lawsuit against the government on May 8, saying the “Paycheck Protection Program, or PPP, is contrary to the statute, arbitrary and unlawfully discriminates against businesses that are in bankruptcy,” according to S&P Global.

Multiple coal companies have received funding through the PPP program. 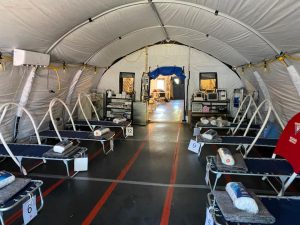 Li-ion storage system manufacturer SimpliPhi Power has partnered with microgrid systems nonprofit Footprint Project to provide a green energy microgrid 20-bed field hospital (pictured) for the Matamoros migrant camp in Mexico on the US border, with the support of the Mexican government. It’s a pop-up, climate-controlled medical ICU to treat coronavirus patients. A solar and energy storage trailer serves as a primary power source for the ICU.

The camp shelters around 3,000 asylum seekers living in overcrowded tents with little infrastructure and no access to basic medical care or hygiene, which heightens the threat of the spread of COVID-19.

SimpliPhi and Footprint Project have partnered on many microgrid projects, including disaster relief in Puerto Rico. SimpliPhi also recently powered a trailer in Nashville after the devastating tornadoes hit.

Renewable energy microgrids for humanitarian needs like the Matamoros migrant camp can play a critical role during this global pandemic, ensuring reliable, uninterrupted access to clean power, allowing medical teams to focus on treatment and medicine, not purchasing fuel over medical supplies.