A thief who had stolen a Tesla Model S got caught after he tried to charge the electric car at a third-party Tesla service center with only 5 km of range left.

If you want to steal a car, a Tesla vehicle might not be your best choice.

According to a report last year, Tesla vehicles are about 90% less likely to be stolen than the average car.

They are equipped with always-on GPS and connectivity that make them easy to track and they are unlocked via a phone app or key fob.

However, every now and again, we still hear stories of people attempting to steal a Tesla vehicle and it often ends in a funny way. This one is no exception.

According to the Czech website ElektrickeVozy, the thief was running out of battery capacity and didn’t know how to charge the car.

He decided to stop at Tesla Servis Clinic, a third-party Tesla Service Center, to charge the car.

The staff at the service center had serviced this particular Model S before and didn’t recognize the driver.

They decided to reach out to the owner and ask if the car was stolen. The Model S owner was surprised that the service center knew it was stolen and asked how they were aware of it.

“Because the thief was so stupid that he came to the clinic and wanted to recharge.” 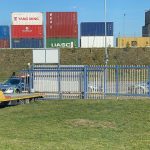 It’s not clear how the thief managed to steal the Tesla Model S in the first place, but there are ways to prevent that.

How to prevent Tesla vehicle theft

A previous report showed that stolen Tesla vehicles in the US have almost all been recovered: 112 out of 115.

In Europe, they have some more sophisticated thieves that managed a string of Tesla vehicle thefts through relay attacks, and most vehicles haven’t been recovered.

In response to those attacks, Tesla started rolling out extra layers of security with “improved cryptography” key fob and optional “PIN to Drive” feature. The automaker also recommended that owners store their key fob in some very simple signal blocking pouch when they are not using it.

If an owner activates the “PIN to Drive” function (go to Controls > Safety and Security > PIN to Drive), anyone entering the car will have to know your PIN in order to be able to drive away.

They could disable tracking in settings, but Tesla pushed an update last year to require entering your Tesla account password in order to disable tracking, making it a lot tougher to steal a Tesla vehicle.

Some people are still stealing them, but at a much lower rate than the average car.

We have seen stolen Tesla cars being tracked live through the Tesla mobile app to help the police.