Stolen Tesla vehicles in the US have almost all been recovered: 112 out of 115

American thieves really need to rethink their strategy when it comes to stealing Tesla vehicles because they are being caught at an alarming rate.

We’ve now learned that stolen Tesla vehicles in the US have almost all been recovered.

Last month, we reported on Tesla warning of theft risk through relay attacks in Europe and sharing ‘tips’ to help prevent those attacks.

It was in response to recent strings of Tesla thefts that appear to be organized in European cities.

Those vehicles were never recovered and likely quickly dismantled for parts. We got proof of that after a Tesla Model S stolen in the Netherlands was found dismantled inside a truck trying to get into Germany.

The thefts continued in different countries and it became clear that the thieves were using a “relay attack”, which consists of virtually “boosting” the signal from a key fob, which would normally be too far away to unlock the car, to another location near the vehicle.

At the time, we noted how strangely those attacks never seem to be prevalent in the US.

Now data from the Federal Bureau of Investigation’s National Crime Information Center data released by the National Insurance Crime Bureau (via Marketwatch) showed that 112 out of 115 were recovered from 2011 to May of 2018: 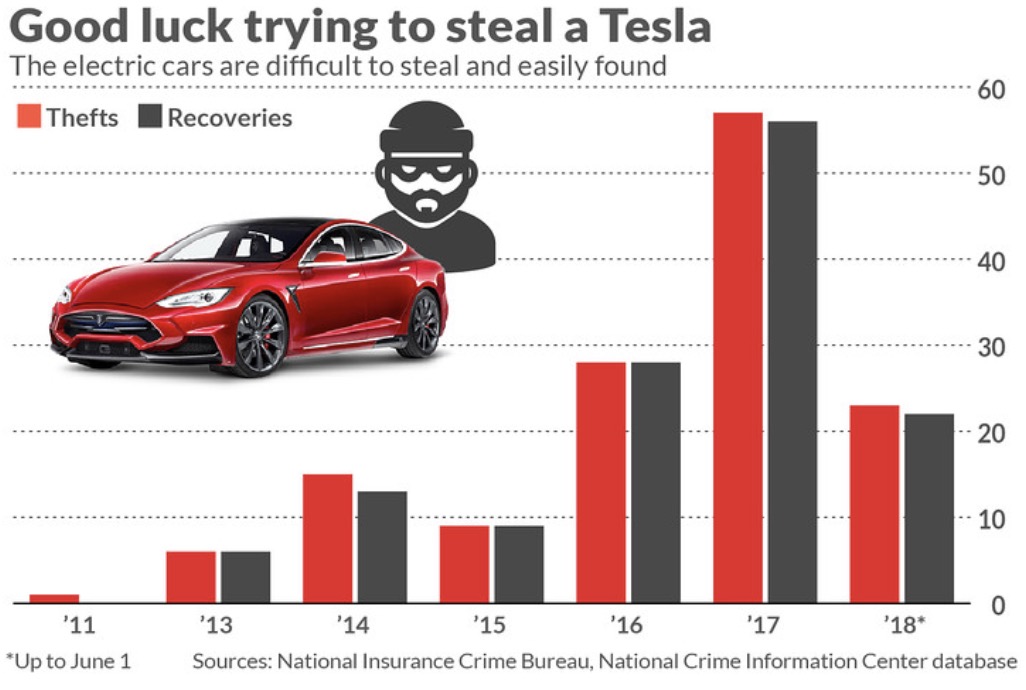 It compares to a recovery rate of just 58.4% for all vehicles in 2016 – meaning that Tesla vehicles are much easier to recover on average in the US.

Frank Scafidi, director of public affairs at the National Insurance Crime Bureau who is behind the report, said:

“That’s about as good as it gets. I’m wondering if the thieves’ intellect might have been overwhelmed just sitting in a Tesla, much less figuring out how to operate it for any length of time.”

We have heard of several stories in North America where owners ended up tracking thieves who had stolen their cars through the Tesla app, which could partly explain the recovery rate.

But the relay attacks could eventually make their way to the US through more sophisticated thieves.

If you want to prepare yourself against those attacks, you can follow Tesla’s tips to prevent theft, which include disabling Passive Entry (Controls > Settings > Doors & Locks > Passive Entry > OFF).

But if you want to keep the convenience of passive entry, you can also store your key fob in some very simple signal blocking pouch when you are not using it.