I’m an electric motorcycle guy, through and through. Yet for some reason I still had to earn my motorcycle license by testing on a gas-powered Harley-Davidson. If the Super Soco TSx had been around then, though, perhaps I could have tested on a new breed of learner electric motorcycles.

The Super Soco TSx isn’t nearly as big, powerful, or fast as the gas-powered Harley I had to test on. But it sure is easier to ride, especially for beginners.

Powered by a 1.9kW continuous rated Bosch hub motor in the rear, the bike can reach a top speed of 45 mph (72 km/h). That keeps it in the 50cc-equivalent class.

It can also be electronically limited to a more beginner friendly speed of 28 mph (45 km/h) via a selector switch. That limited speed drops the electric motorcycle down into electric bicycle territory and can make it easier for first timers to become comfortable handling a larger format bike. Once comfortable, the Super Soco TSx can easily be derestricted back to its native 45 mph speed. 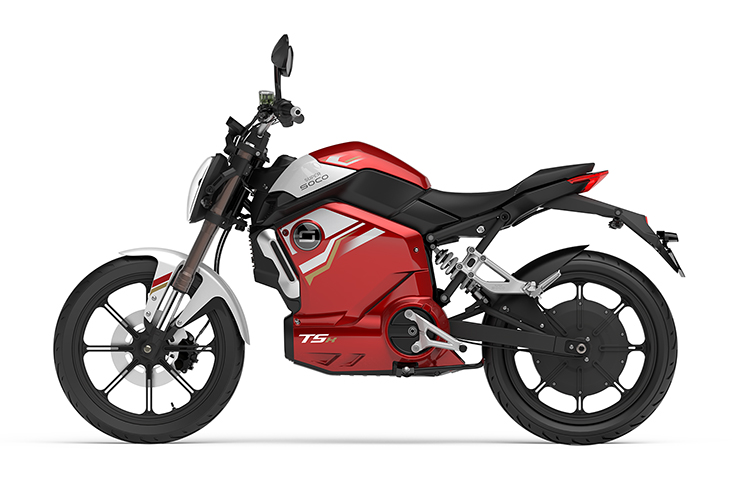 A single battery is sufficient for 25 miles (40 km) of range, though the TSx has room for a second pack to double its range.

The Super Soco TSx is currently available in Europe for a price of around US$3,600, though there’s no word yet on US availability.

While 45 mph doesn’t sound like much, these types of 50cc equivalent electric motorcycles are designed to conquer city streets, not highway stretches. As such, the light electric motorcycles can make effective commuter vehicles for city dwellers. More riders on these quick, nimble little bikes means less traffic, less noise, and less pollution.

But only if more future riders find these bikes.

And a new wave of learner electric motorcycles might be just the thing to get more riders on motorcycles. As electric bicycles become increasingly popular, more riders are experiencing throttle e-bikes in moped and minibike forms. These e-bikes are essentially mini-motorcycles, though usually only capable of speeds up to 28 mph (45 km/h).

As more young riders discover the benefits (and fun!) of these types of e-bikes, many are bound to look for options with a bit more speed. Something in a similar form factor, but which can get them out of the bike lane an onto the road like a true vehicle.

I’ve long been a proponent of creating a new class of e-bikes with higher speeds, bringing 45 mph bikes like the Sur Ron Light Bee or the CSC City Slicker (seen in my review video below) into the fold by not requiring a full motorcycle license but instead offering a modified light electric motorcycle license.

Bikes like the Super Soco TSx are exactly the kind of vehicles that could help get more riders out of cars and further open up alternative transportation opportunities.

Just don’t forget to suit up with the proper safety gear!