Audi is unveiling its new e-tron S models and the company claims that they will be “the first electric cars worldwide with three motors in mass production.”

The German automaker unveiled the concept of the e-tron Sportback not long after the e-tron concept in 2017, and it always planned to release the vehicle soon after the electric SUV.

When they first unveiled the concept for the e-tron, they had a tri-motor powertrain, but they didn’t bring it to production for the SUV.

Now Audi says that it is coming with the new ‘S’ version of the e-tron and e-tron Sportback:

“Audi is systematically moving forward with its e-offensive: The Audi e-tron and the Audi e-tron Sportback are becoming more agile, sharper and more dynamic as S models. The three electric motors, two of which are located on the rear axle, together provide 370 kW of boost power and 973 Nm (717.6 lb-ft) of torque. This allows the two purely electrically driven models to accelerate to 100 km/h (62.1 mph) in 4.5 seconds. The intelligent drive control raises vehicle safety, and dynamic handling in particular, to a new level: In addition to the electric all-wheel drive, there is the electric torque vectoring with active and fully variable torque distribution on the rear axle.”

Here’s a drawing of the electric vehicle’s new powertrain: 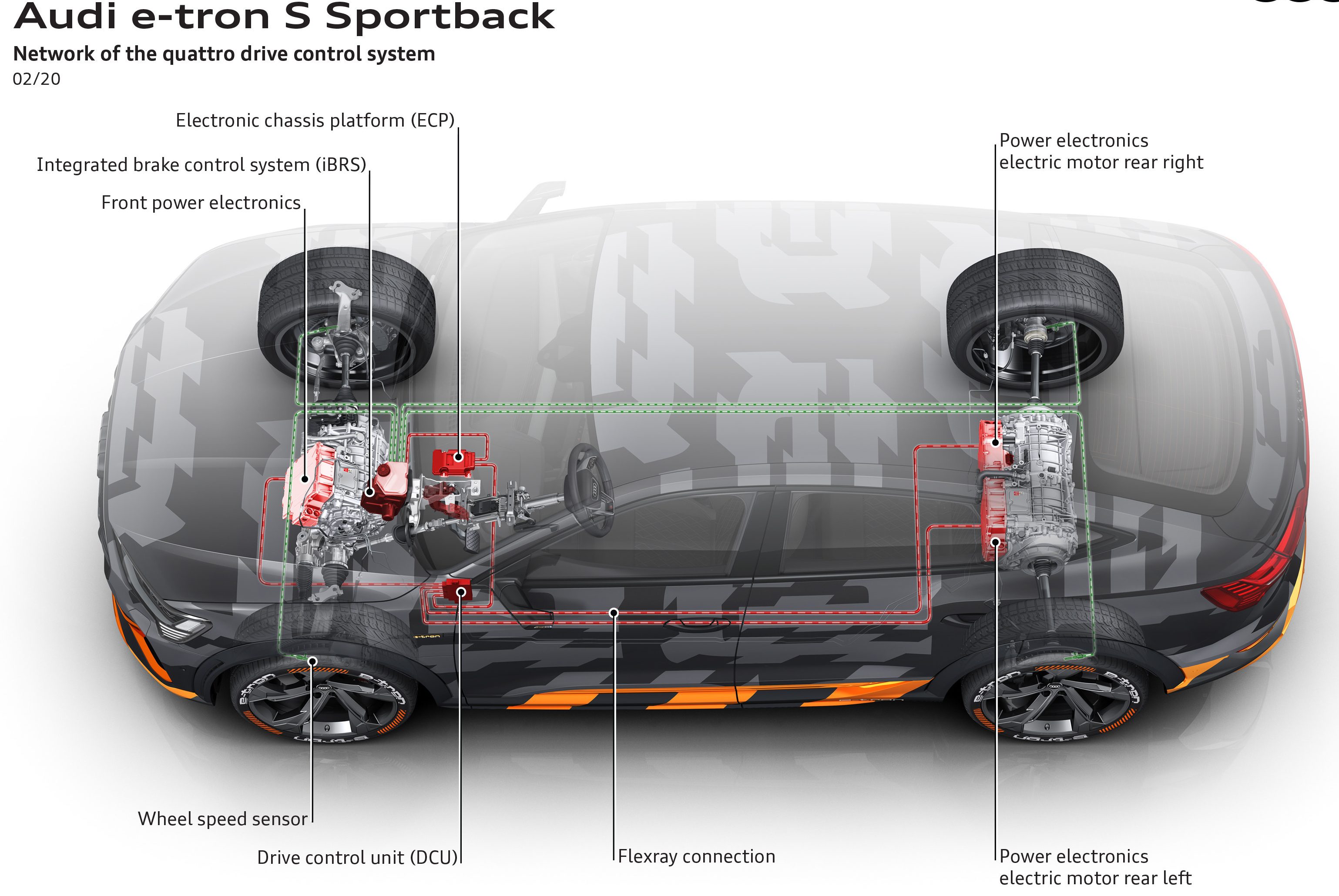 The German automaker says that it tuned the motors for efficiency and performance:

“The drive has been programmed for efficiency in everyday life; in normal driving mode, only the rear electric motors work. The front drive is unpowered but switches itself on – with the driver barely noticing – if the driver needs more power. It also switches on predictively if the grip declines. It does so when friction values are low and during rapid cornering. The electric all-wheel drive is complemented by a further technical innovation in the form of electrical torque vectoring, which brings the advantages of the conventional sport differential into the electric era. Each one of the rear electric motors sends the drive forces directly to the wheel via a transmission; there is no longer a mechanical differential. 40 years following the launch of quattro technology, Audi is thus raising the principle of the four powered wheels to a completely new level of technology. The result: more agile driving and self-steering characteristics, and thus a higher cornering speed. One further advantage is the traction. If, during acceleration, a rear wheel comes into contact with a road surface with a low friction value, i.e. if the road surface is covered in black ice or has a loose subsurface, the moment can be distributed precisely and quickly between the two motors. The full moment is gradually distributed to the wheel with powerful traction, while the wheel with low traction continues moving with almost no moment.”

The e-tron Sportback is coming to the US later this year, but Audi didn’t confirm the timing for the tri-motor ‘S’ version of the electric vehicle.

If they want to be first to market, they are going to have to act quickly.

There are already some low volume EVs in production with tri-motor powertrains and some higher volume vehicles, like the Tesla Cybertruck and Tesla Roadster are expected to come next year.