Tesla is starting to confirm Model Y deliveries to customers for next month after starting low-volume production in January.

In March of last year, Tesla unveiled the Model Y, an all-electric crossover based on the Model 3, with up to 300 miles of range.

At the time, the automaker guided deliveries to start in the fall of 2020 for the higher-end versions of the vehicle.

Tesla has made progress faster, and they confirmed during their earnings results last month that they already started the production ramp at the Fremont, California, factory:

Now Tesla has now started sending out emails confirming delivery for some lucky customers who previously placed their orders:

Congratulations! Your Model Y is ready for delivery in March 2020.

The next step for you is to confirm when you’re able to take delivery so we can ensure the best experience possible.

Once you confirm your availability, we’ll send you an update in the coming days to notify you when you can log into your Tesla Account and complete any remaining steps such as financing or trade-in. Your Tesla adviser will be available to answer any additional questions you may have.

Once customers go on Tesla’s website to confirm their availability, they are given a range of dates so they can give Tesla options to deliver the car in March.

All reports we got so far didn’t offer options before March 15: 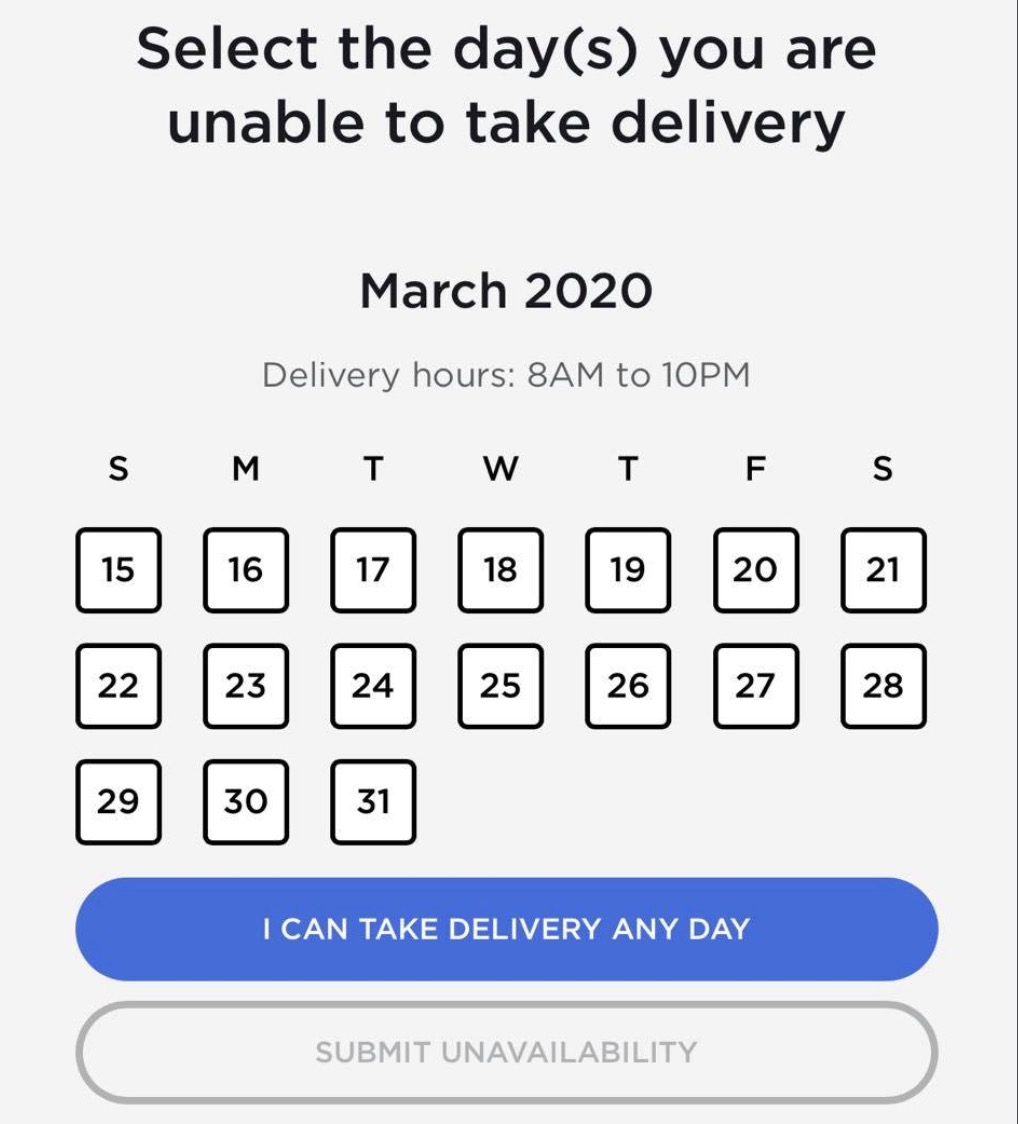 The Tesla Model Y Performance configuration is the one being delivered first, and owners on both the West Coast and East Coast are reporting that they have received the email configuration.

Last month, we reported that Tesla Model Y Performance got its CARB certification, confirming the updated range of 315 miles on a single charge.

Well, it’s happening. It was the shortest time between prototype unveil and delivery that we have ever seen from Tesla.

With Model 3, Tesla started with employee deliveries. It’s not clear if they did the same with the Model Y since they claim to have started production last month and customer deliveries are only happening in the next few weeks.

Over the last few weeks, we have seen an increase in Model Y sightings, and we just assumed that it was all road testing, but some of them, especially those in California, might have been employee cars, since not all license plates were visible.

Let us know in the comment section below if you get the email confirmation, and if you do, please share your state or city and your configuration.

Also, if you are one of those lucky people getting a Model Y next month in the Los Angeles area and you’d be willing to let us take a close look at it, please reach out: fred@electrek.co.