Porsche has started deliveries of the Taycan 4S, the less expensive version starting at $104,000, of its new premium electric car.

In September of last year, Porsche officially launched the production version of the Taycan, its first all-electric car.

At the time, the German automaker only unveiled the two higher-end versions of the Taycan: the Turbo and Turbo S, which start at $150,000.

The new version is offered with two battery pack options:

The smaller battery pack results in a range of 407 km (253 miles), and the bigger one should result in 463 km (288 miles) on a single charge based on the WLTP standard.

The Taycan 4S with Performance battery Plus becomes the longest-range version of the Taycan.

Porsche started Taycan deliveries over the last few months, but it only delivered the two more expensive Turbo versions of the performance electric car.

A Taycan forum member reported on his delivery at the Porsche factory yesterday:

Today I was in Stuttgart and picked up my new Taycan 4S baby directly from where it was born at the Porsche factory. After driving home I can tell all the other Taycan enthusiasts here in this forum: Expect nothing less than your wildest dreams come true as soon as you drive your own Taycan!

He shared a gallery of pictures of his brand-new Taycan 4S: 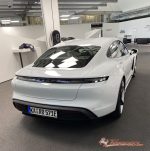 We test-drove the Taycan Turbo S, and we were impressed by the vehicle. It’s not very efficient for an electric car, but I think many buyers can get over that.

The good news is that the 4S is more efficient, and it’s also cheaper.

I think that’s where Porsche will sell some volume. Maybe not Tesla Model S volume from 2014-2015, but I think it can be very competitive with Tesla’s current Model S volumes, at least until Tesla releases significant updates to its top-of-the-line sedan.