To be fair, Specialized has never built mediocre e-bikes.

They’ve always had the “go big or go home” mentality when it comes to performance and quality. And as you might expect, that has also resulted in some pretty expensive e-bikes as well.

Except that this time, it was more like “go light or go home.”

The Specialized Turbo Levo SL was designed to be an ultra lightweight version of the company’s popular Turbo Levo electric mountain bike.

In its lightest weight form, it tips the scales at just 17.3 kg (38.3 lb). While that’s only a tad lighter than some other budget electric bicycles we’ve seen, keep in mind that this is a mid-drive full-suspension electric mountain bike. Those things generally pack on the pounds. Most of the full suspension electric mountain bikes I’ve ridden are north of 50 lbs, and I’ve even ridden some over 90 lbs. 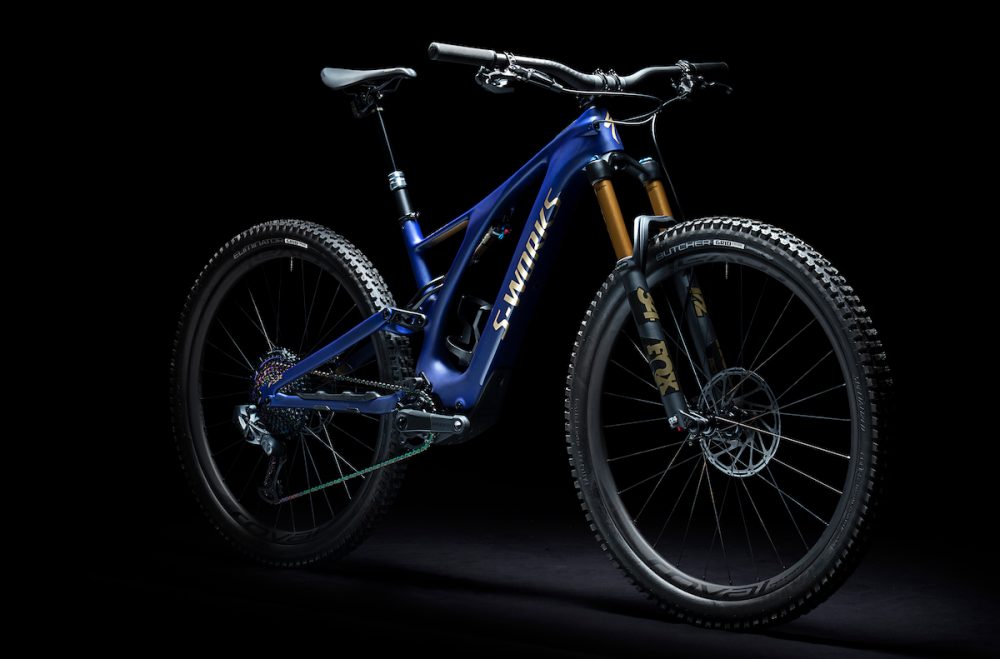 As Specialized explained in an email exchange with Electrek:

Our rider feedback shows that mountain bikers love e-bikes, yet there is still a large segment of riders who think they are too heavy, lumbering, and not for them. While many brands have been working to add range and power, we’ve been working for the past three years behind the scenes to trim down and make the most efficient bike possible. Our solution is the Turbo Levo SL. “SL” stands for Super Light, and as light as 17.3 kilograms (38.25 pounds) in the top of the line S-Works model, it is 30% lighter than most competitor e-bikes. This isn’t just the lightest e-MTB in its class— it’s in a class of its own.

Specialized actually built their own motor that weighs in at just under 2 kg (4.3 lb), which helps to bring the overall weight of the bike down. It’s not pushing out as much power as Specialized’s bigger motors, creating only 240W in the Turbo Levo SL, which is about all you can ask out of a lightweight motor like this. In fact, it’s the same motor used in the company’s high end electric road bikes and is designed to rely heavily on pedal assist from the rider. While many mid-drive motors can triple or quadruple the rider’s own power, the SL 1.1 motor in the Turbo Levo SL offers only double the rider’s input.

When it comes to speed, the motor will power riders up to 25 km/h in Europe or 20 mph in the US.

Next, the battery measures in at just 320Wh. Again, that’s a bit smaller than most electric bikes out there, but does help to drop the total weight of the bike. The downtube-enclosed battery is also non-removable (or at least not quickly removable since you have to pop the motor out first to get to it), which is another design consideration intended to reduce weight. If you need more range though, Specialized offers an auxiliary battery that slips into a bottle cage and can be plugged into the main pack’s charge port to piggy-back on another 160Wh of capacity.

So what does a bike like this cost? The base model starts at around $6,500, which will get you rolling with the aluminum frame Specialized Turbo Levo SL Comp edition. But if you have another $10,000 or so, you can upgrade to the Founder’s Edition for around $16,500. That bike comes with a carbon frame, carbon wheel set, wireless drivetrain, wireless dropper seat post, two sets of 160Wh auxiliary batteries to double the bike’s range, gold foil graphics, rainbow chain, and cassette, etc. Essentially, it’s got the works.

Are you ready to drop a few paychecks on the Specialized Turbo Levo SL electric mountain bike? Let us know in the comments below!