Specialized just announced their new Specialized Turbo Creo SL electric bicycle. And while the new engineering and ultra-lightweight design will impress, it’s the price that will really knock you off your feet. Make sure you’re sitting down for this one!

Specialized is no stranger to high-end electric bicycles. We got up close and personal with the 700 Wh Turbo LEVO at last year’s Paris motor show.

Lately, we’ve seen Specialized hyping their upcoming mystery bike that has been described only as “being able to flatten roads.” Today we finally got to see what Specialized has been working on.

The company’s newest electric bike, the Turbo Creo SL, takes the brand into uncharted e-bike territory with its lightest electric road bike yet. 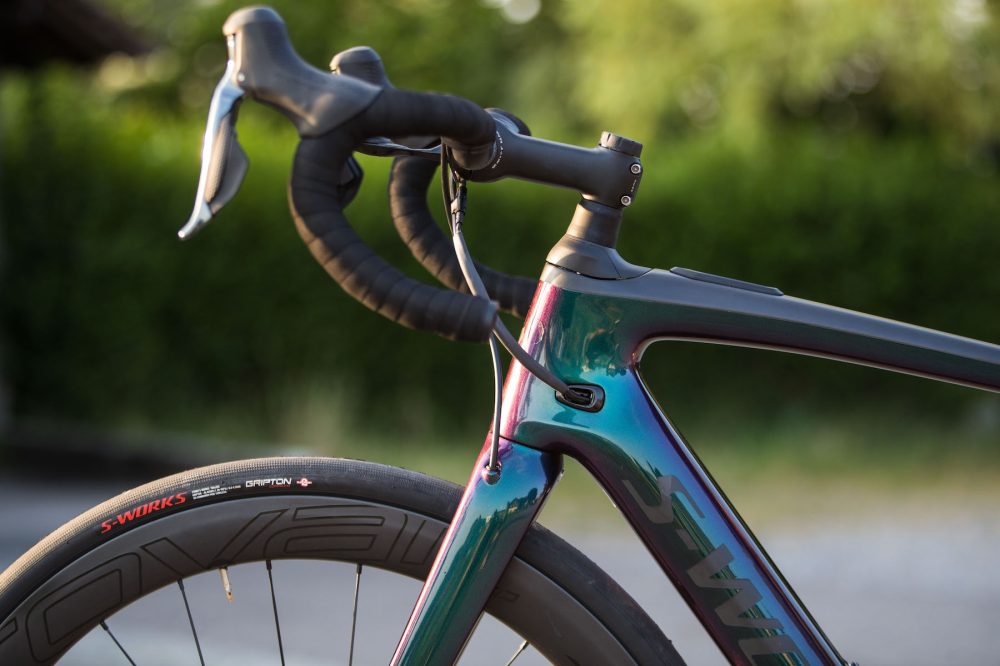 The Specialized Turbo Creo SL is being marketed as the e-bike that can make cyclists “as fast a Tour de France rider”. The company is even invoking the Tesla effect:

“The Turbo Creo SL has the capability to make any rider as fast as a Tour de France rider. It offers powerful and smooth assistance in a light weight bike, which will have riders climbing mountains as if the earth was flat. Thanks to Tesla, electric automotive technology has advanced at a lighting fast clip, and Specialized refuses to stay behind. They’re setting a new standard in the e-bike industry for light weight, power delivery, range and connectivity.”

The 12.2 kg (26.9 lb) electric road bike uses a proprietary motor that was custom designed by Specialized. The company had previously used Brose motors, but claimed that there wasn’t a lightweight motor on the market that could do what Specialized required, and so the brand invested in the R&D to design its own.

The result is a 240 W continuous whisper-quiet mid-drive motor dubbed the SL1.1.

Specialized’s new Turbo Creo SL is rated for a maximum range of 195 km (121 miles). While these high range figures of new flagship e-bikes are often a bit optimistic, Specialized is calling this a “real world range”.

To be fair, it should also be noted that such high ranges require the rider to provide a decent amount of pedal effort. The motor gives around a 200% boost on its highest power setting, but that kind of range relies on less assistance from the motor. 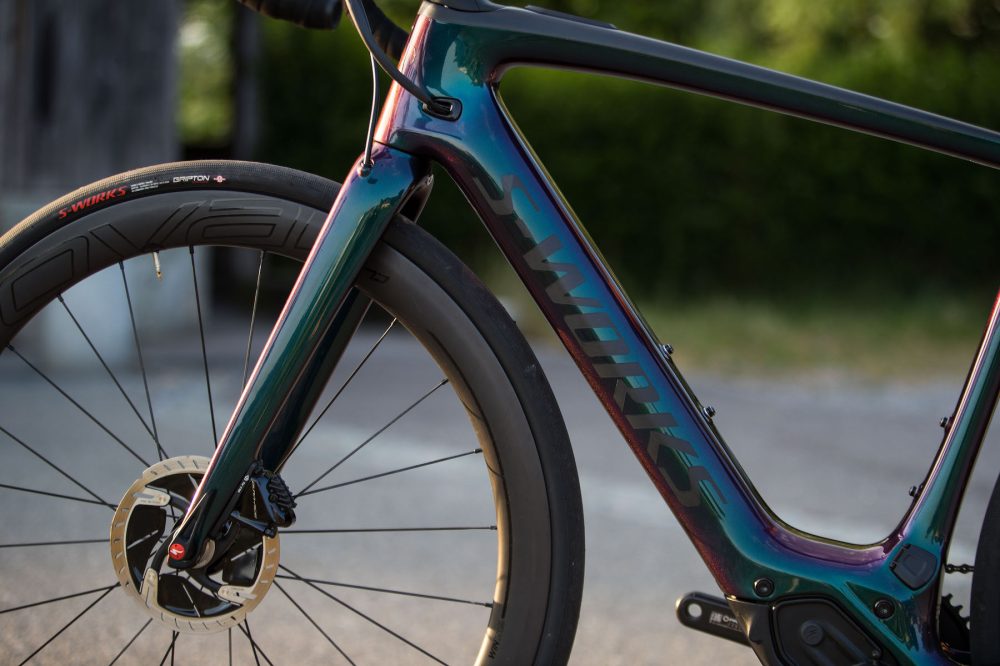 The Specialized Turbo Creo SL also comes with a decent amount of customizability. As described by the company:

“Riders can personalize the Turbo Creo SL’s power delivery by using Specialized’s Mission Control App. The bike has three riding modes – ECO, SPORT and TURBO. The Mission Control is constantly being improved with the millions of kilometers ridden. The app can also be used to manage the battery life automatically, by telling the Smart Control feature how long or how far the ride will approximately be. The Mission Control will calculate and ensure that the battery will last the entire ride. The SL1.1 motor also has integrated ANT+, a multicast wireless sensor network technology that connects to your power meter which tracks rider power.”

How much does the Turbo Creo SL cost?

The $17,000 price tag is for the Founder’s Edition, of which just 250 bikes will be produced and they will be individually numbered, if you’re into that.

The carbon frame and lightest weight component set drop the weight on this model to just 11.9 kg (26.2 lb), which is pretty insane for an electric bicycle. 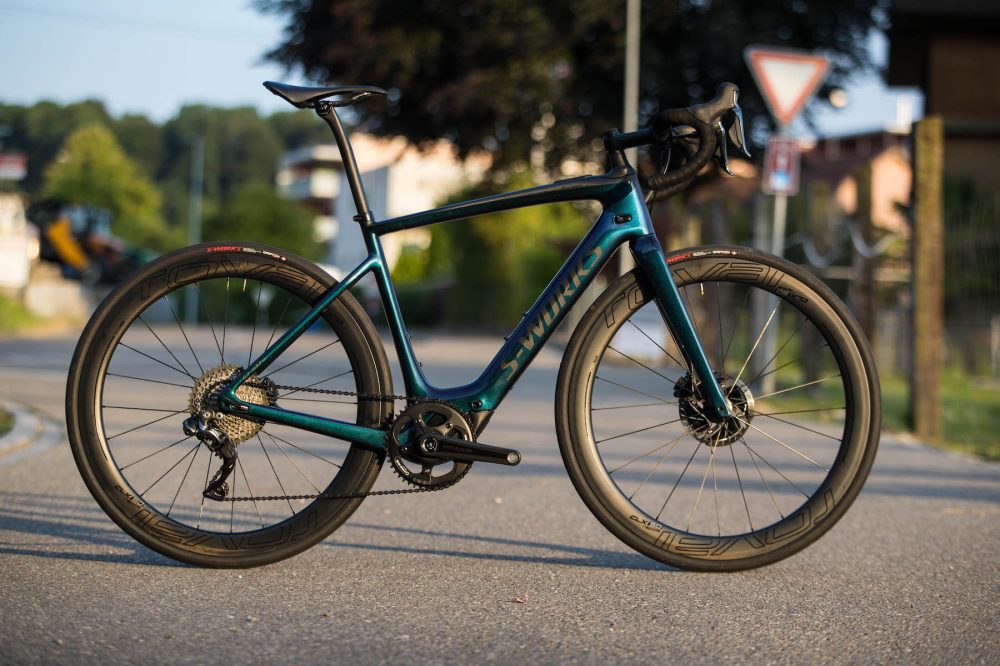 So why is the bike so expensive? Well, you’re paying for the California design team to create this custom carbon frame and the Swiss engineering team to develop an entirely new e-bike powertrain. And you’re paying for a wide range of sizes including XS, SM, MD, LG, XL, and XXL. Not to mention the slew of high-end bicycle components that invariably adorn a Specialized bike.

But at the end of the day, you’re largely paying for it to say “Specialized” on the side.

With just 35 Nm of torque, the 1.95 kg (4.4 lb) motor is as svelte as it is underpowered. Riders who value power should look elsewhere.

But for true cyclists that are looking to save every single gram they can yet still want the power of an e-bike, the Turbo Creo SL can deliver it for a price.

And of course, there’s a pretty hefty air of exclusivity at work here. So is the $17k price tag worth it for the bike on its own? Of course not. But is the status symbol worth it? That will depend on you…

What do you think of the Turbo Creo SL electric road bike? Let us know in the comments below.