McKinsey, the management consulting firm, yesterday published “The Road Ahead for e-Mobility,” a major 2020 study about EV adoption. To gain its insights, researchers conducted surveys with 11,100 consumers, including 1,200 EV owners. Recent years have brought progress with the technology, the number of available vehicles, and expanding charging infrastructure. But McKinsey called consumer demand the “last big unknown” for e-mobility.

While a lack of consumer choice previously held back EV adoption, global automakers are now beginning to deliver. The global pipeline for new all-electric models to hit the market by 2025 now numbers 400 vehicles, according to McKinsey.

“Three or four years ago, one of the big challenges getting in the way was not enough available models,” Russell Hensley, a partner at McKinsey, told Electrek. He explained that in 2016, when McKinsey previously conducted the same survey, 26% of consumers said the type of vehicle they wanted was not available as an electric model. In late 2019, when the new survey was conducted, the number dropped to 9%.

The banner year is 2020, with 113 new EVs expected this year alone. The lion’s share is large vehicles, a shift from the mostly smaller electric models previously offered.

At the same time, consumer awareness about the benefits of EVs is at an all-time high. Nearly all global consumers, more than 90%, have an awareness of EVs. Consumer awareness is highest in China, with 99% of respondents. 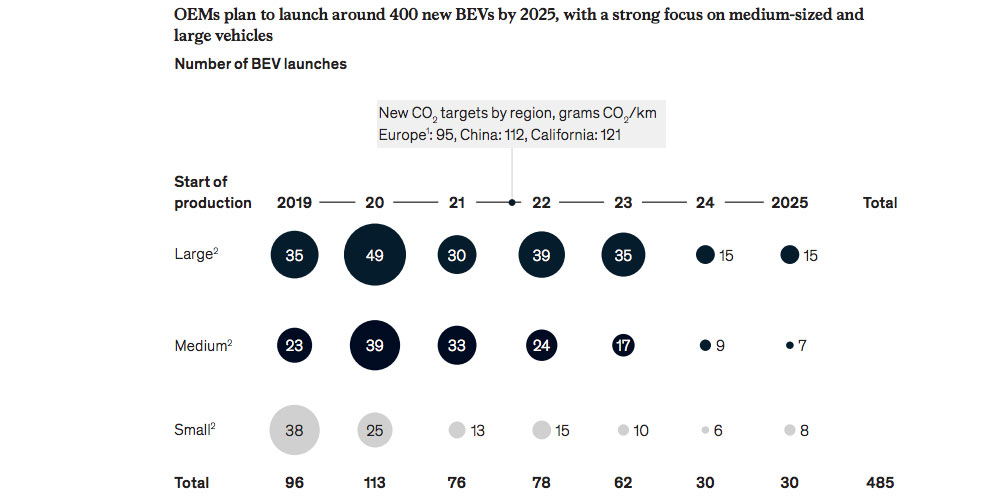 While only 29% to 44% of consumers outside China reported a willingness to consider purchasing an EV in 2016, that number was as high as 51% in 2019. The lowest level of consideration is found among US consumers.

Globally, consumers still have concerns, such as a lack of understanding about range, charging, and batteries. McKinsey believes these factors “prevent a large-scale consumer pull for EVs.”

Hensley said that the 2010s represented the “rebirth of the EV,” when first-generation models like the Nissan Leaf started to arrive. “This decade, we believe EVs will hit the mainstream, north of 10%,” he said.

Hensley pointed to decreases in cost as a factor. He said that McKinsey has been looking at battery costs since 2008 when the price per kilowatt-hour was about $1,600. Today, he pegs that cost between about $100 to $200. “Over a period of 10 years, the cost has fallen to 10%,” he said. “And there’s still room to go.” 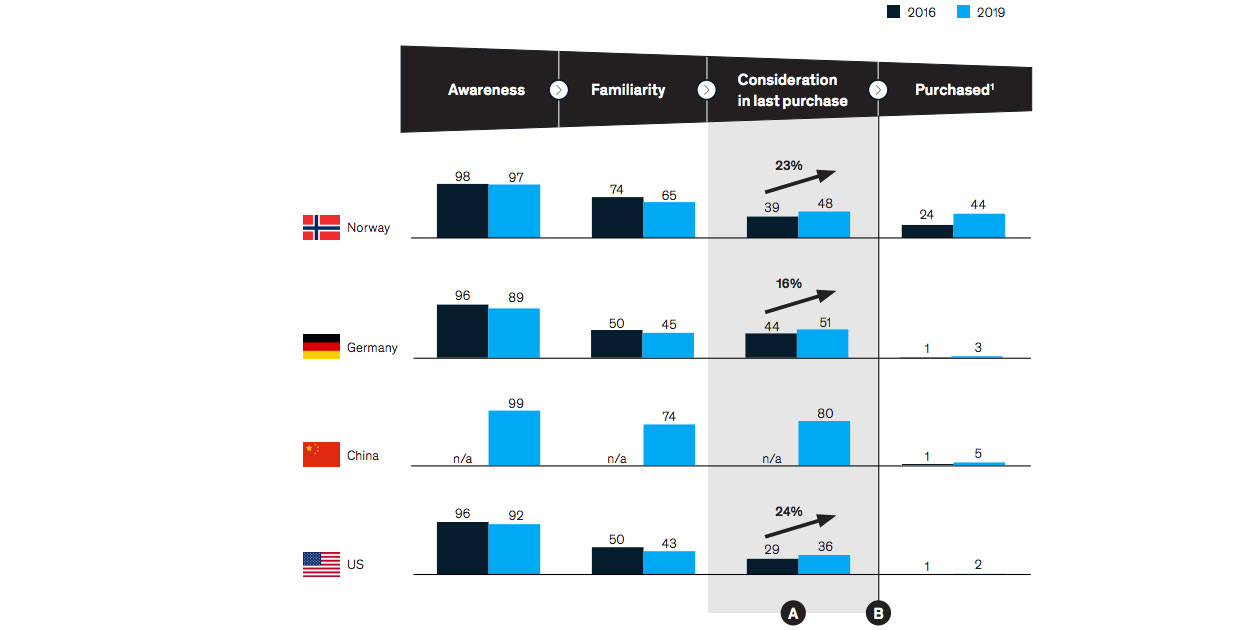 The firm believes that EV adoption could be increased with a better understanding of the differences between today’s electric and internal-combustion buyers. According to the survey, EV owners compared to ICE owners:

There are strange inconsistencies in adoption patterns. Worries about charging is a concern, even in areas with the densest network of public charging stations.

Also, range concerns persist even though only 12% of respondents commute more than 25 miles a day.

After conducting incognito store visits, what Hensley referred to as “mystery shopping,” McKinsey believes major improvements could be made to the consumer shopping experience. Websites could provide much better customer advice, and stores could provide “comprehensive know-how” that is now lacking.

“There’s not necessarily a huge incentive for the dealers to push electric vehicles,” he said. “It’s not the first vehicle that they take you to.”  Hensley said that there’s a lot of education needed at the dealership level. But between that educational task and less profit, many dealers view selling EVs as hard work and added cost.

Other than China, McKinsey found that EVs were typically positioned in the corner of the showroom floor or not at all. In one case experienced by McKinsey, the only EV that the sales staff could show was the private car of a member of the sales staff.

One by one, the obstacles to EV adoption are getting knocked down. Some of the hardest problems to solve ­­­— such as carmakers not producing EV models in enough variety or with adequate range ­— are being addressed.

Most of these findings can be filed in the “known problem” folder. Moreover, it’s well established that the key to increased adoption is education. In other words, the technology and ownership experience are no longer the major obstacles.

Today, it’s more a matter of getting consumers to understand the many benefits of an EV. Here’s the good news: Once that psychological barrier is broken, it’s game over for internal combustion.