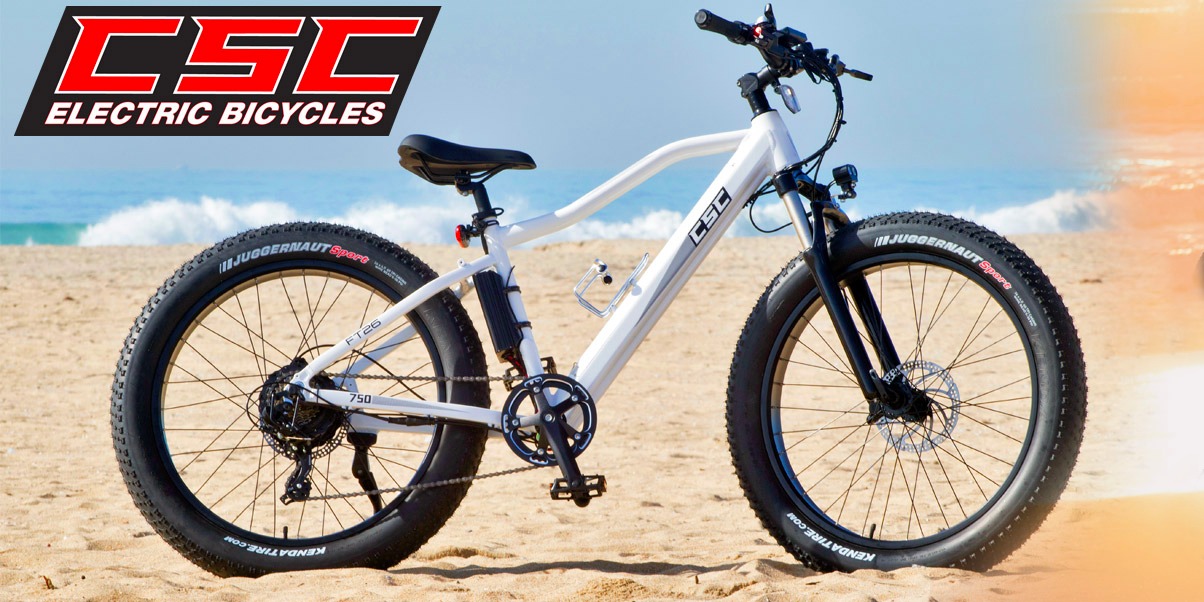 These are exciting times in the electric bicycle world. E-bike offerings are constantly improving and customers are getting increasingly higher quality bikes for ever-better deals. Nowhere is this more apparent than with today’s release of the FT750 electric bicycle from CSC Motorcycles.

The FT750 is the fascinating answer to the question, “What would happen if a motorcycle company built an electric bicycle?”

CSC has been in the motorcycle game for years, as in gas motorcycles. A couple of years ago they got with the 21st century and brought in their first electric motorcycle, the 45 mph and $2,195 CSC City Slicker.

That little urban e-moto got the company’s feet wet with electric vehicles and led to a seated scooter known as the Wiz.

As CSC’s owner Steve Seidner became further enthralled with two-wheeled electric vehicles, he began looking into electric bicycles as another way to get riders onto two wheels.

He was shocked at the prices in the industry though, which often topped prices for his own motorcycles.

“I became frustrated when I was shopping for an electric-assist bicycle, trying to sort through the cheap junk and the expensive stuff that costs more than our motorcycles. After doing extensive research, I was able to source the exact componentry to build an e-bike that is the perfect balance of quality and value.” 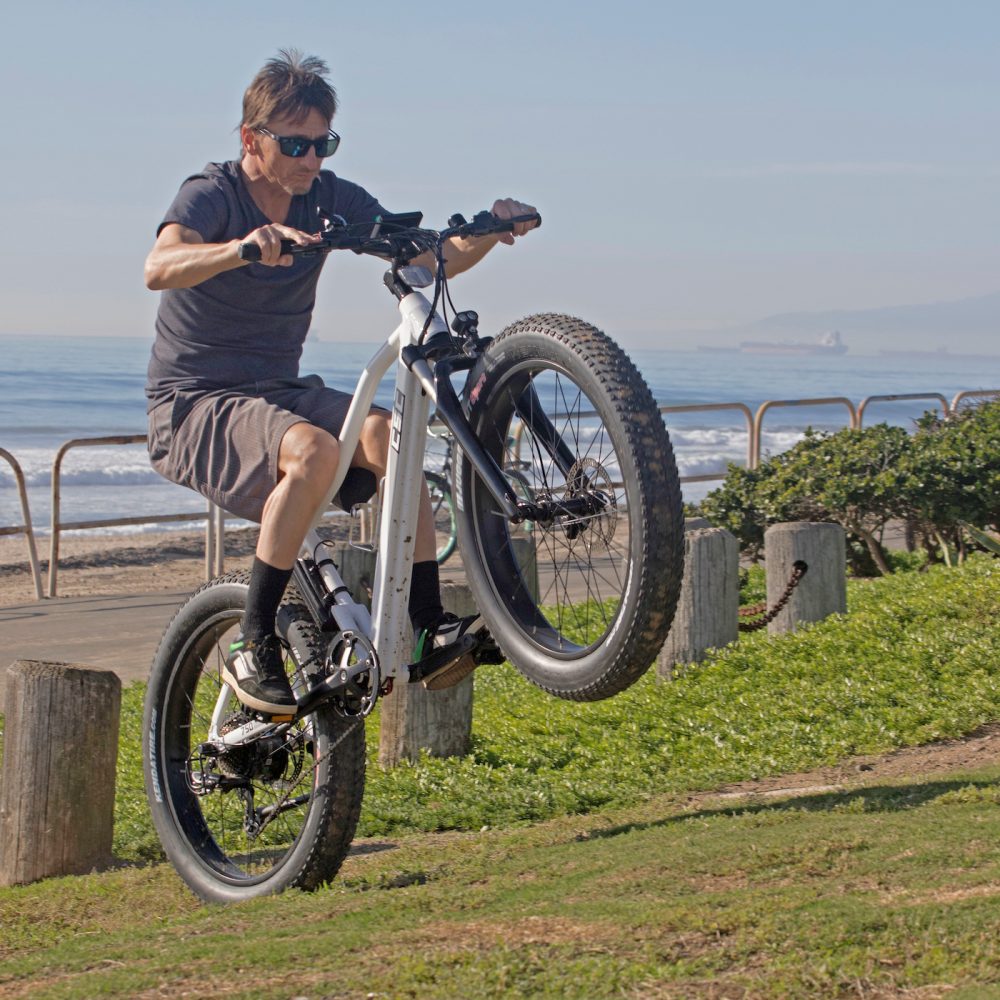 At $1,688 with free shipping, CSC’s first electric bicycle falls above the budget-category of e-bikes but squarely in the mid-level price range. The specs, however, are well above its price range. And that’s what CSC is known for, putting together motorcycles (and now bikes) with good performance yet for affordable prices.

I got their CSC City Slicker electric motorcycle and my sister (against my advising to go electric) got their 250cc San Gabriel motorcycle. Both are barely more than $2k and both are amazingly fun machines. As much as I love electric motorcycles, I’ll be honest and say that I’ve tooted around on her 250cc bike more than a couple times. And the value is there across the entire CSC motorcycle lineup.

So far, it looks like CSC’s first electric bicycle has followed that same design ethos – stuff it full of good parts but keep the price down to what an Average Joe can afford.

The 650 Wh battery is integrated into the bike’s frame so there’s no unsightly battery bolted onto the frame piggy-back style. That battery is sufficient for around 20-45 miles (32-72 km) of range depending on whether using the hand throttle or pedal assist. And it’s built with high-quality Samsung 35E battery cells, the most energy-dense 18650 cells that Samsung produces. 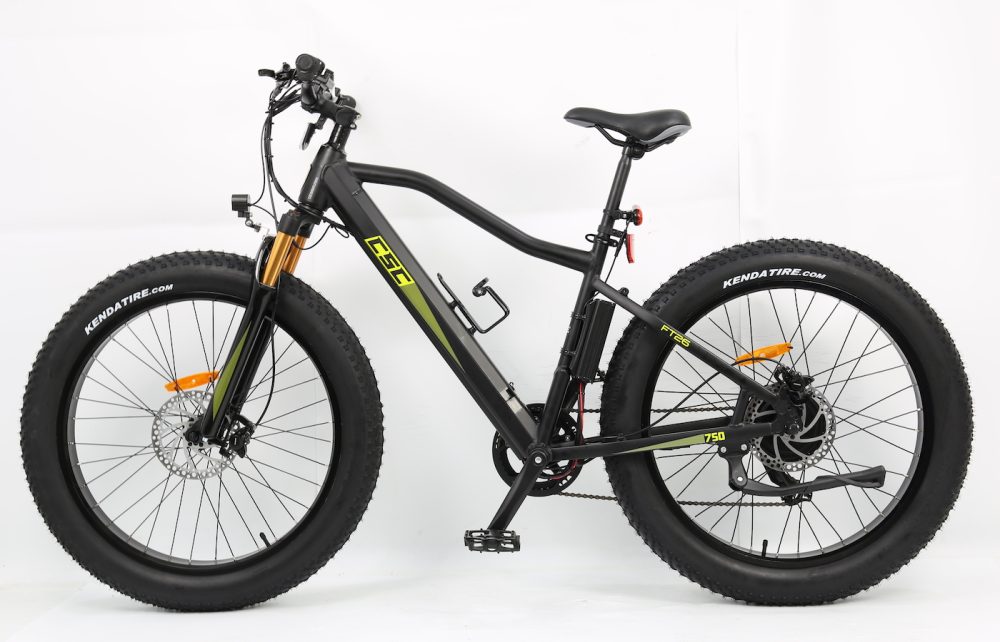 That’s a lot of nice parts for a mid-level price. If I could have made one addition, I’d love to see fenders come standard. But there are at least mounting points for racks and fenders so they’d be easy to add.

The FT750 is also available in two variants. There is the full-sized FT750-26, which features 26″ wheels, and the smaller FT750-20, which is likely better for smaller riders.

The bikes are available for pre-order now with just a $250 deposit. You can find more details and full specs on CSC’s site. 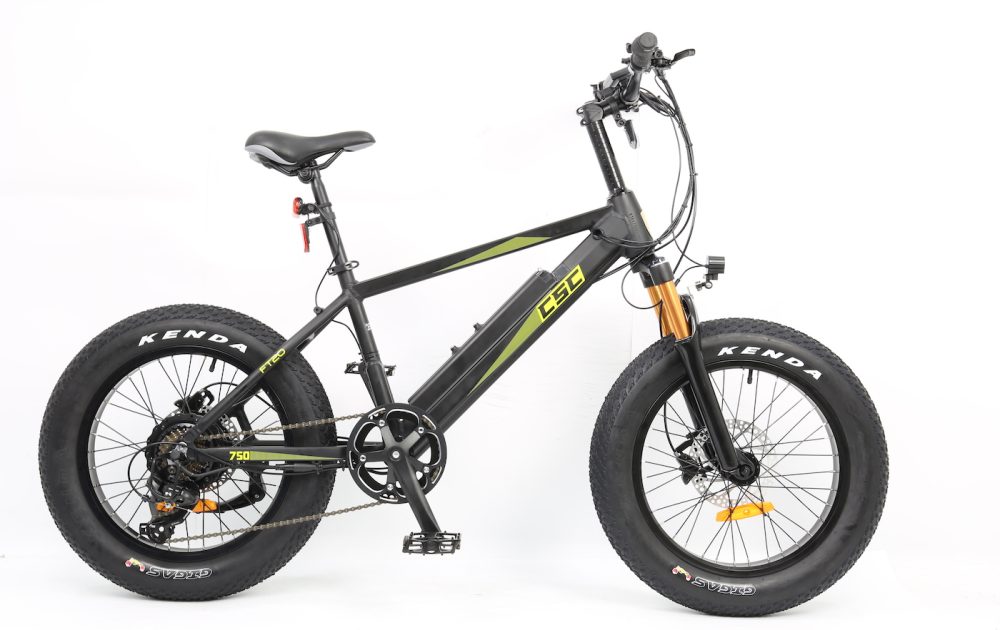 I find that the best way to consider value in the e-bike market is to compare new bikes to the current leaders.

In the mid-level price range, the undisputed leader in terms of volume and reputation is likely Rad Power Bikes, followed by Juiced Bikes.

But if we compare the FT750 to such e-bikes, the value quickly becomes obvious. For an extra $188, you get an integrated (hidden) battery, faster top speed, higher-end Shimano bicycle components, hydraulic disc brakes, larger brake rotors, better quality suspension fork, and other smaller improvements in terms of parts quality.

If those don’t matter to you, then a typical $1,500 mid-level e-bike is probably fine. For me? That integrated battery and hydraulic disc brakes are probably worth the slight price bump all on their own, not to mention all the other improvements.

But what about you? Let’s hear what you think of the CSC FT750 e-bike in the comments below!