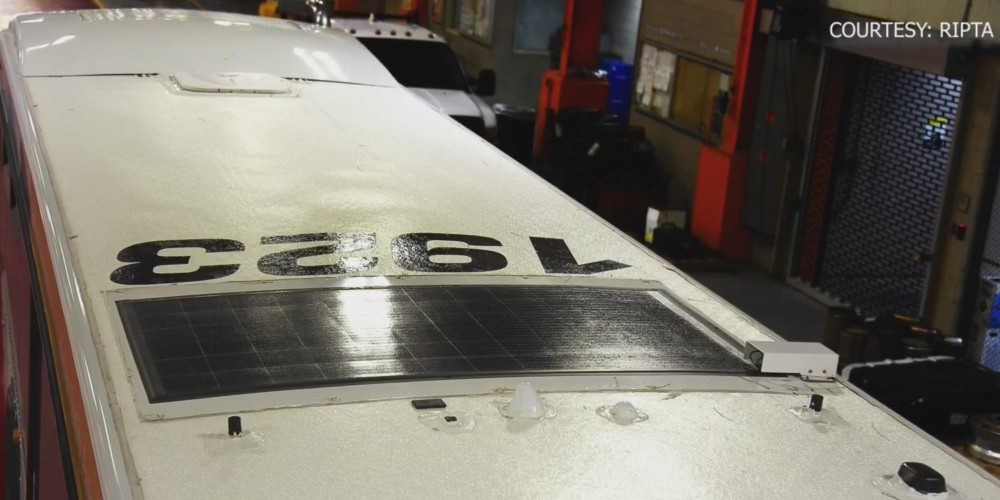 The solar systems are made by eNow, a Warwick, Rhode Island-based company that makes mobile solar battery-charging technology for commercial transport. eNow worked with RIPTA on a pilot program for more than two years to test the effectiveness of their solar panels on buses.

RIPTA received a green energy grant from the Rhode Island Commerce Corporation through the Renewable Energy Fund that covered 2/3 of the cost.

The solar systems are designed specifically for the transportation industry and will extend the vehicle battery life and optimize battery performance, thus saving RIPTA around $80,000 a year. Further, it reduces the amount of diesel fuel used, thus reducing emissions.

Solar charges the batteries on commercial transportation. Our technology has helped transform the heavy-duty diesel transport business — existing equipment as well as new equipment. Our system eliminates the need to idle. With solar, the batteries will last longer.

When I asked Shaffer why RIPTA invested in diesel vehicles rather than electric, he said,

The purchase decision takes place years before the buses are delivered. I’m sure electric buses are in [RIPTA’s] queue to be purchased.

Upfront, an average diesel transit bus costs around $500,000, compared with $750,000 for an electric bus. But in the long run, electric buses provide greater cost savings, not to mention a huge reduction in emissions. An electric bus could save $400,000 in fuel expenses and $125,000 in averted maintenance costs. Therefore, they are a cost-effective method of transportation.

Scott Avedisian, RIPTA’s chief executive officer, said in RIPTA’s press release that RIPTA “will explore the feasibility of having the panels installed on more buses in the future.” What we’d really like to see at Electrek is RIPTA investing in electric buses. eNow is working on solar for e-buses, so let’s see that happen with all public transit authorities.

The European Commission announced yesterday that it will be budgeting at least €1 trillion of investment over the next 10 years to make Europe carbon neutral.

As Electrek previously wrote on December 13:

The European Commission (EC) released a new climate change action plan… known as the European Green Deal, with the subtitle, “striving to be the first climate-neutral continent.” The plan aims to make the European Union “climate neutral” by 2050.

Today’s budget announcement says that the plan will use a mix of both private and public funds, including one-quarter of the EU’s budget, according to EuroNews.

Part of the budget is a €100 million Just Transition Fund. That money is to help countries like Poland transition to green energy. Poland is still on 80% coal.

Members of European Parliament will vote on the resolution tomorrow. The EU wants the Green Deal to be law by March 2020.

It says will set out the conditions for transition, provide predictability for investors, and ensure the transition to carbon neutrality is irreversible.

The $5 million Los Angeles Cleantech Incubator (LACI) Impact Fund has formally announced its launch today. This is a welcome addition, as investments in early-stage cleantech have taken a hit in recent years, yet seem to now be making a comeback.

The new cleantech impact fund considers a range of criteria beyond the traditional ability to make returns.

The criteria consists of:

LACI recently made investments in Seatrec, which provides off-grid clean, renewable electricity for research and monitoring, and Freewire, which delivers mobile and off-grid EV charging and power supply technologies.

The need to accelerate climate action is greater than ever, and we are thrilled to announce the LACI Impact Fund. Investing in LACI’s portfolio companies will help our startups scale not just their growth, but also their economic, environmental, diversity, and social impact. Our first investments represent our firm commitment to the transportation electrification and 100% clean energy revolutions.

In April 2019, the city of Los Angeles announced that it was setting a goal of 100% zero emission vehicles by 2050. As Electrek wrote in October, Los Angeles mayor Eric Garcetti is the new chair of the C40, a coalition of 94 city mayors from across the world who have committed to a global Green New Deal and recognize the climate crisis.