Segway is on a serious roll with new personal electric vehicles lately. The latest is a hoverboard-style self-balancing motorized chair know as the S-Pod that is equal parts fascinating and dystopian.

Remember those hoverchairs that society used in the Pixar movie Wall-E?

You know, the ones that were pod-like floating recliners, ferrying people around in an organized fashion, making walking a relic of the past? 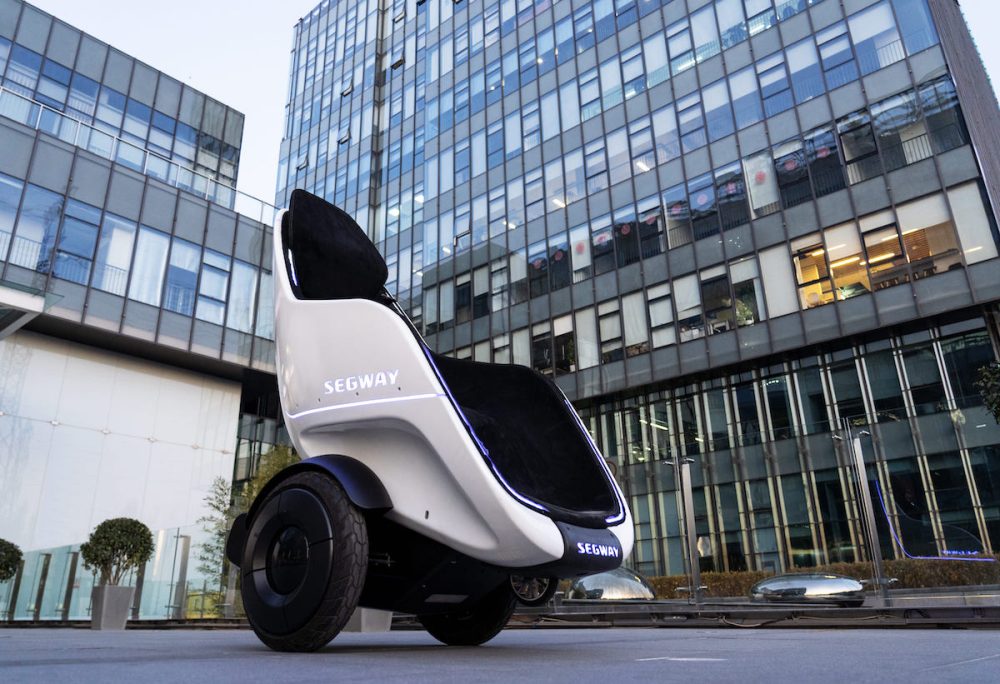 The idea makes sense, in a way. Segway’s most prolific products right now are its electric scooters, which are scooting around cities all over the world. But as convenient as those standing scooters are, many people feel more comfortable in a seated, bike-like position. That might explain Segway’s recent announcement that it would enter the seated electric scooter market. But the S-Pod takes it one more step by removing the handlebars and footpegs entirely.

Instead, the S-Pod uses a hand knob that adjusts the lean angle, and thus the center of gravity, of the S-Pod. Because the S-Pod is self-balancing, leaning the chair forwards will cause it to propel forwards at any speed the user prefers, up to a limit of 24 mph (38.6 km/h). Braking is accomplished similarly by turning the knob the opposite way and causing the S-Pod to lean back. The rider doesn’t need to lean like on a typical Segway or hoverboard, all driving inputs are managed by the hand control.

And before you go running in terror thinking an S-Pod will be flying down your local sidewalks soon, ready to take you out at the waist, know that Segway initially plans the S-Pod to be used on closed campuses. As the company described in a statement, “the Segway S-Pod is a first-class smart transporting pod for enclosed campuses such as airports, theme parks and malls.”

In principle, I think this is awesome. I mean, who wouldn’t want a 24 mph two-wheeled electric go-kart?! Sign me up for the first test ride!

At the same time though, I do worry about the safety implications of mixing these things with pedestrians. A crowded mall, airport, or theme park could turn into a massacre if someone can’t figure out the controls or if stubborn pedestrians refuse to move out of the way. Heck, people barely get out of the way of those golf carts in airports and they’re beeping like a delivery truck in reverse.

I think an awesome use for these S-Pods could be for disabled people though, who could enjoy the benefit of a more comfortable and fun way to scoot around than a typical wheelchair.

But if a good system could be developed to keep S-Pods and pedestrians separated, safe and happy, then I could see something like this being successful.

It’s not going to do the step counter on your phone any favors, but it does look like a fun ride. As long as we don’t all go full Wall-E and forget how to walk.

@inside @heatherkelly Kinda reminds me of the hover chairs from #Walle pic.twitter.com/8kyVIi83Eo

What do you think of the Segway S-Pod? Let us know in the comments below.