What would happen if you took the power of a Tesla motor and stuffed it into a glorified go-kart? You’d get a crazy powerful electric race car just like this one!

Today we’re getting our first look at the Tesla powered electric race car built by Damian Butcher and his team from Driftech Electric Racing.

The car is powered by a Tesla Large Drive Unit which is capable of putting out 450 kW (603 hp) of power.

And to put that amount of power in perspective, the entire car weighs just 450 kg (992 lb).

For those of you keeping score at home, that’s 1 kW per kg, which is an astronomically high power to weight ratio. 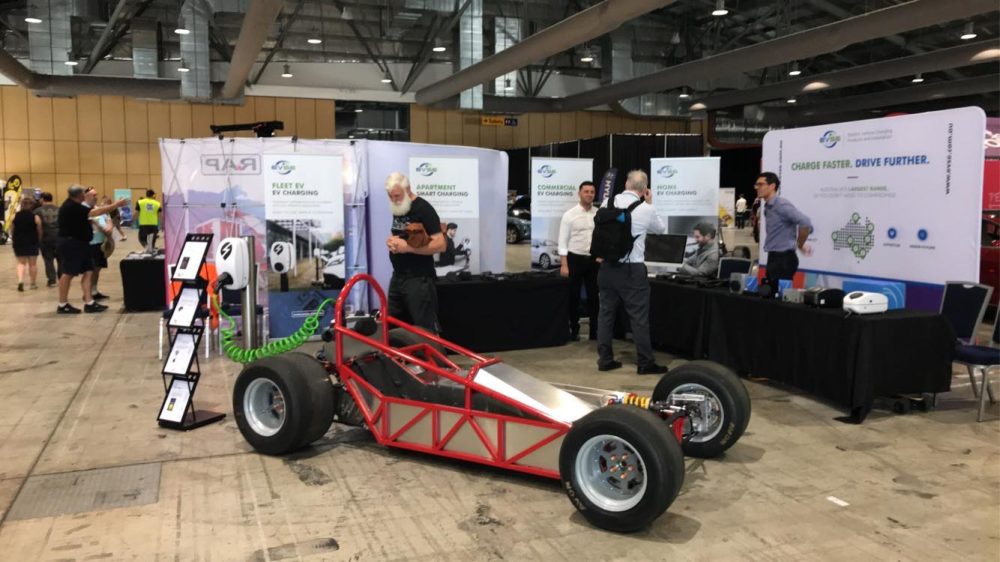 Our close look at the car and detailed info come courtesy of the YouTube channel BrunoPOWWEEER, who spotted the car at the Sydney EV Expo run by the Australian Electric Vehicle Association. Bruno got a chance to talk to Damian as well as the car’s owner and driver, Phil Pratt. While Bruno is normally seen checking out high power electric bicycles and motorcycles, this time he tried his hand at something much more intense. Check out the video below.

The Driftech Electric Racing team actually mounted the Tesla drive unit upside down in the car. That helped them get the weight of the motor and transmission further forward and ahead of the rear axle, which improves the handling of the car.

The batteries are mounted on the left side of the car and counterbalance the weight of the driver on the right side.

The car has a 60/40 rear to front weight distribution that shifts to 50/50 under hard braking in cornering.

The car also has an aerodynamic body, though it isn’t seen in the video.

Damian welded the chassis himself, while Phil welded the suspension components. Despite its light weight at just 450 kg the car was actually overbuilt, as Damian described:

“We’ve probably over-engineered it a little more than we needed to in the event that we end up doing normal track runs. It will actually spend most of its life racing in hill climbs.”

The car’s battery is a 400 V LiPo battery capable of 1,800 A continuous output. The motor will be pulling only around half of the battery’s max continuous power, so Damian explained that it won’t be generating enough heat to require active cooling. However, the Batrium Battery Management System controlling the battery will have an active cooling system included (though it isn’t yet installed, as seen in the video).

Because of the safety issues inherent to LiPo batteries, the battery box is built from stainless steel, which should be able to contain a fire should the worst-case scenario arrive. The battery case is also built with a trough on top so that in the event of a fire, it can be easily flooded with water to bring down the temperature of the pack and reduce the chance of thermal runaway of all cells in the pack. It might destroy the battery, but it will prevent the battery from destroying the rest of the car.

And that’s important, considering how much money the team put into this project. Damian estimates that there is around US$100,000 into the car. You didn’t think this was a cheap hobby, did you?!

Make sure you check out the full video above to see the car in all its glory.