The first sales of the all-electric 2020 Mazda MX-30 crossover are expected in early 2020. It’s part of a wave of new EVs for Europe with a battery size considered behind the times in the US. But Mazda (and others) introducing electric cars in Europe believe that about 35.5 kilowatt-hours ­— enough for about 150 miles of range — is enough for customers and is better for the environment.

EV proponents are unlikely to buy the company’s argument. Christian Schultze, director at Mazda Europe’s R&D center, pegs the total CO2 emissions of a 35.5-kWh pack for the MX-30 crossover as comparable with a diesel-powered Mazda3 compact. He’s including total CO2 emissions for the vehicle’s use, as well as battery production and disposal. That advantage is still there if you had to replace the pack after 100,000 miles, according to Mazda.

On the other hand, Schultze told Automotive News that a 95-kWh battery pack would have substantially higher CO2 emissions from its first day. There was no mention of local air pollution caused by diesel emissions. New 2020 stricter regulations in Europe focus on CO2.

Mazda offers this (incomplete) graphic to make its case. Apparently, the green line is for a 95-kWh EV. 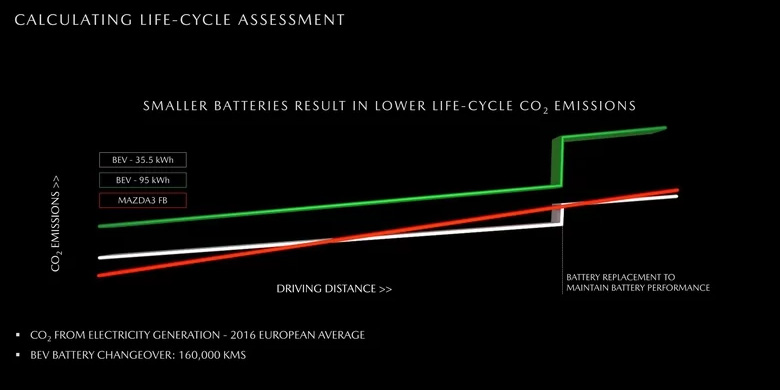 Numerous studies show that EVs are cleaner than diesel on every level, including CO2. A conservative study from the International Council on Clean Transportation (ICCT) states:

An electric vehicle’s higher emissions during the manufacturing stage are paid off after only two years compared to driving an average conventional vehicle, a time frame that drops to about one and a half years if the car is charged using renewable energy.

This graph supports the ICCT study: 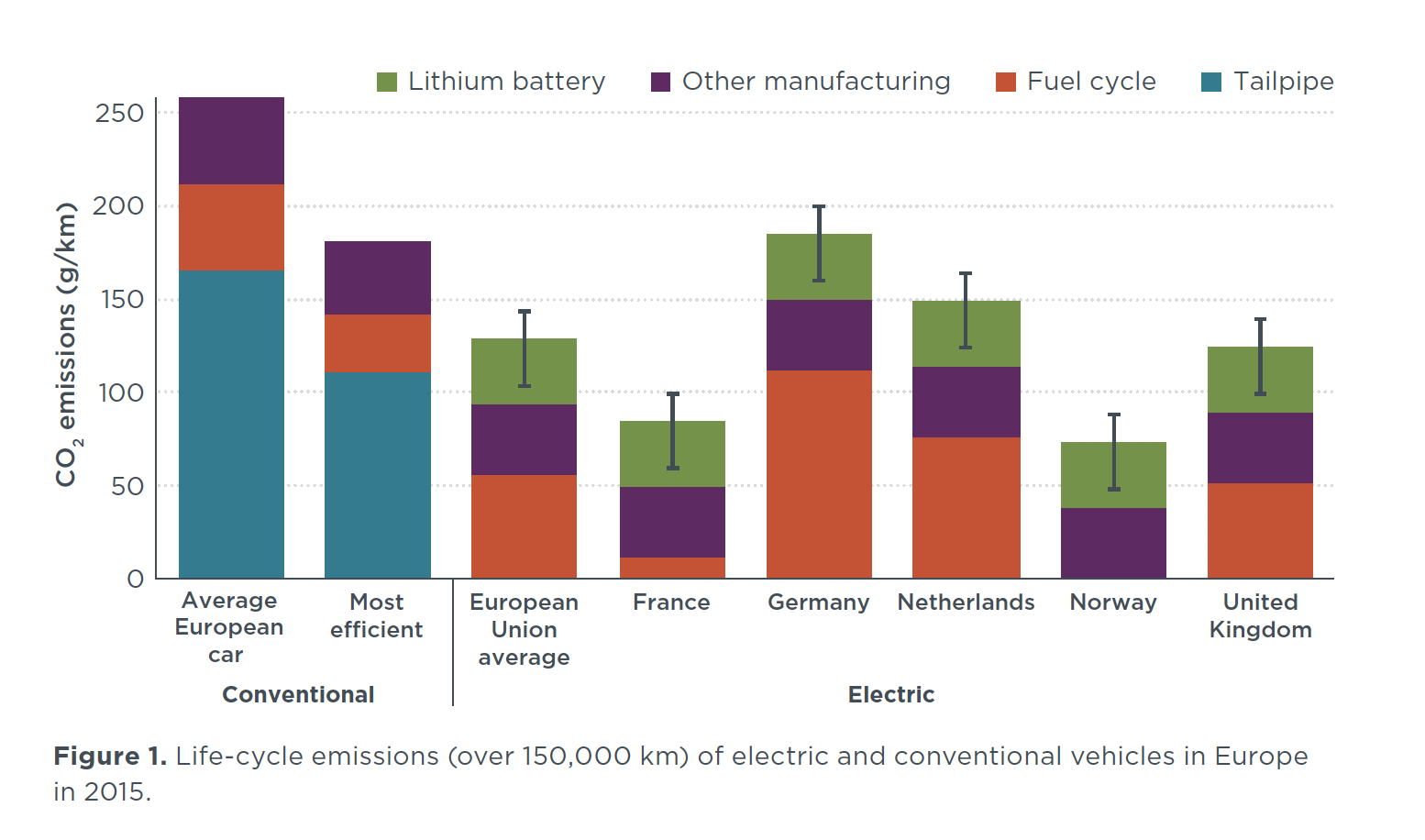 The MX-30 is built on the platform used by the CX-30 crossover. Its design is sportier, with forward-opening rear doors, a sleek roofline, and a tapered tail silhouette. A 105-kW electric motor powers the front wheels, providing 143 horsepower and 195 pound-feet of torque. Regen braking is increased via steering-wheel paddles. It goes on sale in Europe for roughly the equivalent of $40,000.

In the US, EV range below 200 miles (and a pack smaller than 60 kWh) is considered laughable. But the Mazda MX-30’s 35.5-kWh pack aligns with the identically sized battery in the upcoming Honda e. The new Mini Cooper SE has an even smaller battery at 32.6 kilowatt-hours. The BMW i3 isn’t much bigger at 42 kWh. (Tesla experimented with 40-kWh packs but dropped them.)

In a telling comparison between US and European markets, the Hyundai Kona EV is only available in a 60-kWh variant in the US. In Europe, a 39.2-kWh option is also sold. 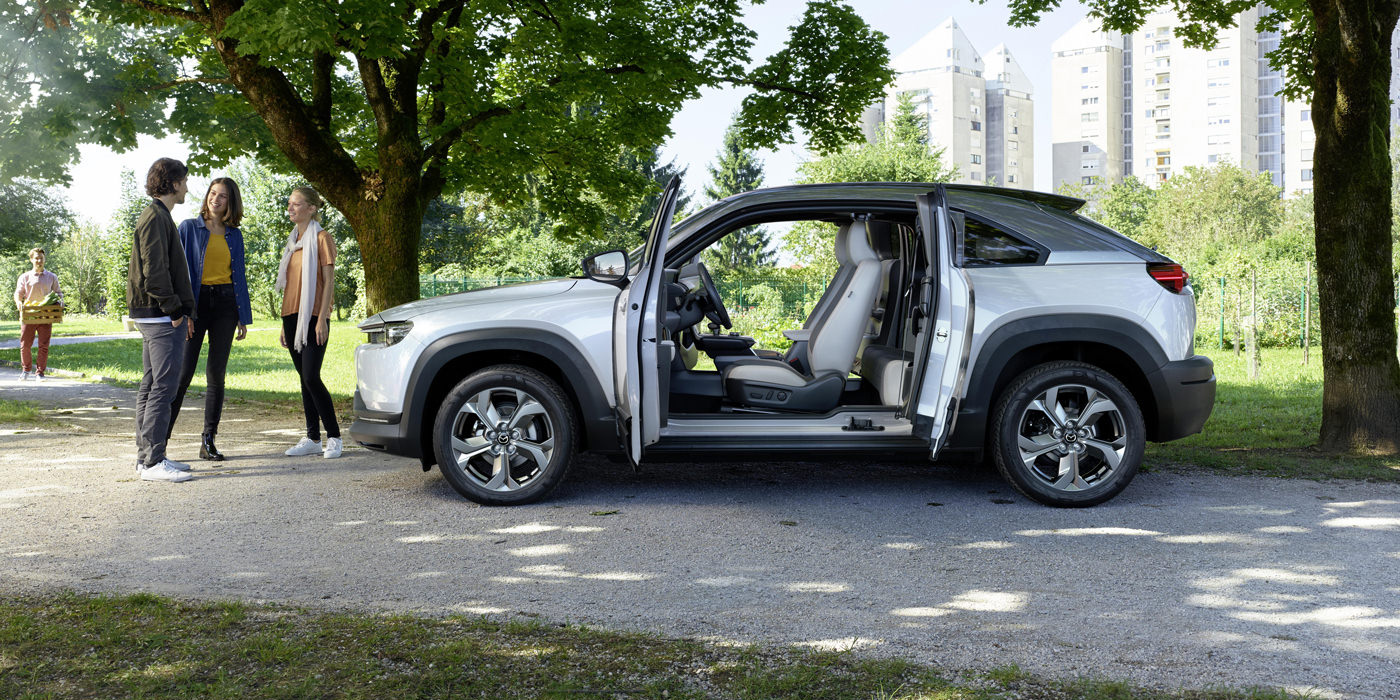 Mazda says the electric MX-30 is aimed at urbanites

We based the battery size on the needs of our target customers, who are young, urban buyers. The second factor was that when we did a life-cycle assessment, which considered not only the emissions caused while driving but the emissions from the production of the battery, we found that a 35.5-kilowatt hour battery would result in CO2 emissions similar to our diesel models.

That is why we selected a right-sized battery for our first battery-electric vehicle. We understand, however, that some customers require cars that can provide a longer range. Therefore, as a second step, we will deploy a rotary-engine based range extender to the vehicle. We also need to closely monitor how fast battery capability progresses. If it improves significantly, we may consider a bigger battery in the future.

Mazda says that its urban and suburban customers in Europe, on average, drive as little as 25 miles a day. Drivers wanting to go longer distances can buy the MX-30 with a range-extending engine. 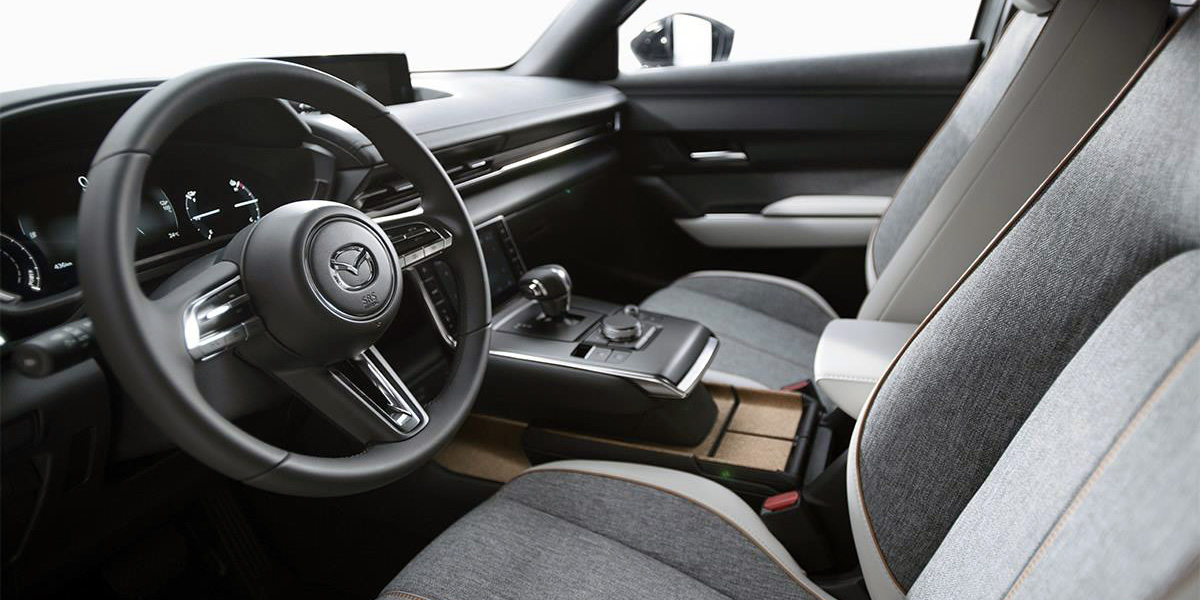 The MX-30 will not be sold in the US at first, but the EV coming to America is not out of the question. “Given the importance of minimizing CO2 penalties, we will start selling it in Europe first,” said Aoyama. “As far as other countries are concerned, we are still in a study phase.”

The MX-30 was entirely developed by Mazda. Panasonic provides battery cells. Future Mazda EVs could use a platform developed jointly with Toyota. Aoyama said another Mazda EV is not being considered until about 2025.

Carmakers just entering the EV market usually tiptoe in with smaller battery sizes. This is especially true for electric-car laggards like Mazda and Honda. But all trends point to longer-range batteries over time. Look at Renault and Nissan, which have bumped up battery capacity in the last year.

That said, Europe, where smaller urban subcompacts are more popular, will be a fascinating litmus test in 2020. There will be a crop of smaller, lower-range EVs from downmarket companies competing against luxury brands such as Tesla and Volvo. Can the two markets coexist?

We hope so, because small city cars also need to transition to EV. And it could help bring the mass-market, affordable EV needed for global markets.

Regardless, it’s not helpful for Mazda to make misleading claims about the relative environmental benefits of EVs and diesel-powered cars. And it creates a foul smell around Mazda’s first EV, which otherwise looks like a fun ride.