A new study has tried to address two of the main concerns over the environmental impact of electric vehicles versus gas-powered cars: namely the emissions from electricity generation to power the EVs and the impact of mining raw materials.

The main takeaway is that even electric cars powered by electricity generated by the dirtiest fossil fuel sources, like coal, still emit fewer emissions than diesel cars.

We have seen similar studies coming to similar conclusions in the US earlier this year and that was based on dated electricity generation data while the grid is becoming cleaner.

Now an analysis of the life-cycle emissions of the vehicles conducted by VUB university in Brussels for NGO Transport & Environment (T&E) goes into further detail based on several European markets.

It’s a truly enlightening study going in-depth to isolate CO2 emissions based on every part of the vehicle cycle.

As you can see on the chart below, even on an extremely polluting national grid, like Poland’s, a battery-powered vehicle still emits 25% less CO2 over its lifetime than a diesel car: 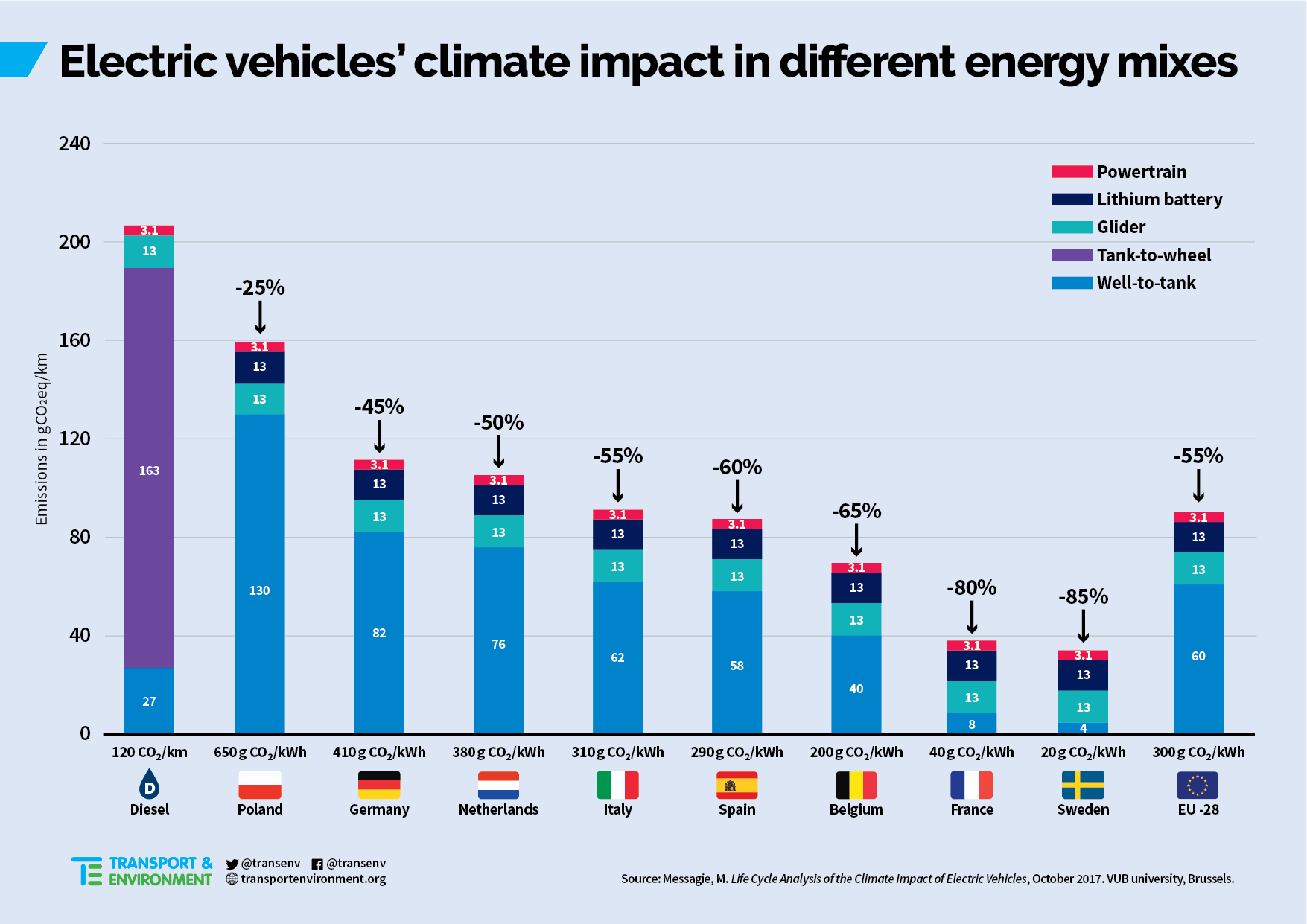 Like in the US, those results are expected to rapidly improve as European countries are adding renewable energy to their electricity generation portfolio at an impressive rate.

In the study, Dr. Maarten Messagie concludes that while there’s room for improvement on the battery manufacturing front to reduce the environmental impact, clean electricity generation sources have the greater impact.

It becomes clear when comparing Poland, which has a dirty grid mainly powered by coal, and Sweden, which gets its electricity from cleaner sources, like nuclear, hydro, wind and solar, on the chart above.

On the battery front, Messagie points to battery technology improvements also having a potential impact:

“New chemistries for lithium batteries that avoid the usage energy intensive and toxic materials can significantly reduce the impact. The fine-tuning (minimization of material usage in cathode and anode) and the optimization of production process (larger volumes) of existing battery technologies will improve the overall impact of the BEV.”

Overall, this study shows we are going in the right direction. EVs already make more sense environmentally speaking now, and it’s only going to get better.

At this point, it’s all about accelerating the deployment. Most markets are still stuck at less than 2% market share for EVs. In Europe, it’s currently 1.7%.

Several European countries have announced upcoming goals to get their EV market share up to 100% and get rid of new diesel and petrol-powered vehicles between 2030 and 2050.

Aside from Norway, most of those markets have a long way to go, but new EVs coming to market in the next few years should make a big difference.