To see which regulations have been rolled back, visit Harvard Law School’s Regulatory Rollback Tracker, which is run by the Environmental & Energy Law Program. This is what the tracker does:

We are tracking environmental regulatory rollbacks of the Trump Administration. The table below links you to pages that describe the history of each rule and its current status and rollback efforts, including litigation and court decisions. We track open comment periods, and link to pages where you can submit comments.

Regulations included the Chemical Disaster Rule, which we at Electrek have previously covered, the Keystone XL pipeline, and of course, the Paris Climate Agreement.

Click on Harvard’s link above to see the full list and explanations of what the regulations are — or were, before Trump killed them.

Environmental activists built a “Christmas tree” made out of cigarette butts in Seoul, outside of KT&G Tower, a huge Korean tobacco manufacturer.

The point of the demonstration was to call for a ban on plastic cigarette filters.

According to the South China Morning Post, filters made with plastic are the second most littered single-use plastic product, according to the European Union.

The video below states that 4.5 trillion cigarette butts are thrown away annually.

Have a look at the (presumably rather stinky) tree in the video below.

In more news from Seoul, South Korea announced on Tuesday that the country will permanently shut down another nuclear reactor in order to reduce dependence on nuclear power and increase green energy.

The Wolsong-1 reactor in Gyeongju, about 370 km southeast of Seoul, will follow the Kori-1 reactor, which was shut down in 2017.

Its operational license ran until 2022, but its early closure decision was made due to its falling operational rate and growing maintenance costs for the reactor, which was launched in 1983.

The South Korean government plans to retire 11 out of 24 nuclear reactors in the country by the end of 2030.

In 2017, renewable energy took up just about 7.6% of the country’s total power generation. Coal-fired thermal power made up 43%, followed by nuclear power accounting for 27%.

The MIT Technology Review ran a story on December 24 titled, “Our Pathetically Slow Shift to Clean Energy, in Five Charts.”

The website points out that green energy had a “stellar decade”:

The cost of large wind and solar farms dropped by 70% and nearly 90%, respectively. Meanwhile, renewable-power plants around the world are producing four times more electricity than they did 10 years ago.

Similarly, electric vehicles were barely a blip at the outset of the 2010s. But automakers were on track to sell 1.8 million EVs this year, as range increased, prices fell, and companies introduced a variety of models.

The Review publishes five charts — on renewables, carbon-free electricity, two on EVs, and what the future growth curve needs to look like — which illustrate the disparity between where we are, and where we need to go.

Check out the article’s charts, as you know the old saying about a picture being worth a thousand words. 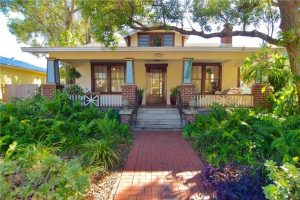 Yale Climate Connections wrote a quick post pointing out that not all buildings sweltered before air conditioning was invented.

In houses this worked with the large open stairwells in the building and then usually windows at the upper part of the stairwell that worked with what we call a chimney effect to let breezes go through and go up the building.

So all of these systems made them less dependent on mechanical systems.

Thick stone walls in some regions also served as insulation for older houses in both the summer and winter.

In my historic preservation district neighborhood of 1920s to 1940s houses in St. Petersburg, Florida, for example (example is pictured), many were designed with attic fans that draw out hot air. We also have porches and Florida rooms, which let in the breeze. There was life before air conditioning, Americans.

Gotthelf’s advice is to draw from both old and new techniques to cool houses without running air conditioners all the time.

In a recent study from the Global Alliance on Health and Pollution that examined global deaths from pollution, the US is the wealthiest nation in the top 10 list, at No. 7.

In the US, air pollution is responsible for more than half of pollution-related premature deaths (and yet Trump keeps deregulating environmental protections, as we pointed out above).

According to the Guardian, “toxic air, water, land, and workplaces killed at least 8.3 million people around the world in 2017, accounting for 15% of all premature deaths.”

The report updates findings from a Lancet study that found 9 million pollution-related premature deaths in 2015.

The biggest burden of deaths falls on low and middle income countries, with India and China responsible for 4.3 million of all pollution-related premature deaths.

But the US ranks seventh for overall deaths, sandwiched between Bangladesh and Russia, and is the ‘wealthiest’ nation to feature in the top 10 with almost 197,000 American lives lost in 2017.

The top 10, which also includes Brazil, Indonesia and Nigeria, account for two-thirds of the global pollution death toll.

I wrote this week’s roundup a little early, because, you know, holidays.

But Jane Fonda isn’t letting holidays get in the way of running her weekly Fire Drill Fridays demonstration. (I suspect it will be business as usual for Greta Thunberg, too.)

This week, she and her Grace and Frankie co-star Lily Tomlin are being joined by many others on the US Capitol’s southeast lawn from 11 a.m. to noon on December 27 to advocate for forests. The protest is called, “Forests Can’t Wait.” It’s really quite simple — and yet vital:

Forests are a key ally in combating climate change — and we need to join together to be allies for the forest. Simply put: we can’t solve the climate crisis without protecting forests.