See what’s underneath and inside the Porsche Taycan

The video covers a lot of topics and has some interesting insights and specs about the car, which we’ll get to point by point.

First, they start at the front of the car and focus on the brakes.  The Taycan is capable of recapturing power at a rate of 265kW from the regenerative braking system, which is a good amount of deceleration already.

But beyond that, the car has big 10 piston calipers on the front.  Even though most city driving will be done with regenerative braking, big brakes are needed on such a big car.  The Taycan is almost 5,000lbs (depending on configuration) with its big 93kWh battery.

The brakes will help in high-performance situations, or when regenerative braking is reduced for various reasons – if the battery is full, overheating, or something of the sort.

Then the tour moves on to the radiator for a little chat about the Taycan’s cooling systems.  The grille is smaller than on most cars because electric cars generate a lot less heat and thus need less cooling.

The car makes use of two conventional radiators, though rather small ones.  Behind the grille there are also two brake ducts which channel air to those big brakes, helping cool them off in situations where they’re getting a lot of use (primarily, on the track).

High-voltage cables are also visible at the back of the wheel wells, leading to the Taycan’s charging system.  The car has two charge ports – one AC charge port on the driver’s side, and one AC/DC port on the passenger side.  Both sides are capable of 9.6kWh AC charging, which should make it easier for owners to find a suitable garage configuration for charging.

But the passenger side has 3 high-voltage cables whereas the driver’s side only has one, due to the passenger side’s DC charge capability.  This is where the Taycan shines, with 270kW charging capability (and 350kW capability promised in the future) to get you back on your road trip or back on the track as quickly as possible (though not quite as quick as a Tesla).

Staying in the wheel wells, we have a little chat about suspension.  The Taycan uses a modified version of the Panamera’s air ride suspension, shortened for the Taycan’s lower front end.  Later in the video, we can see the air canister at the rear of the vehicle which stores the compressed air to power the air ride suspension system.

At the rear wheel wells, we have a little discussion about sound deadening.  Since electric cars are much quieter than gas cars, this amplifies the apparent effect of road noise for drivers.  Since the whole car is quieter, any parasitic sounds will stand out, without engine noise to mask them.  So Porsche put a lot of work into sound deadening material to keep the car quiet on the inside (and then spoiled that work with a $500 option for fake engine noise…).

Underneath the car at the rear, we get a little look at the motor, gearbox, and differential.  These components aren’t really visible in the video, as they’re tucked up above the air canister and pump for the air suspension.

The Taycan’s rear motor is attached to a two-speed gearbox, which gives the car better high-end acceleration.  It also has a torque vectoring system on the rear axle, with an electronically-controlled differential to aid the car in cornering ability.

Then comes the biggest part of the car, the battery.  The battery is placed at the very bottom of the car, as pioneered by Tesla in the Model S.  This is the ideal placement for an electric battery and benefits vehicle dynamics in several ways.  First, it reduces the car’s center of gravity and polar moment of inertia, which help handling.  Second, it optimizes underbody airflow which improves aerodynamic efficiency.  Finally, the battery is used as a stressed member which increases chassis stiffness, which again helps handling.

Up at the front of the car we see some coverings underneath the front motor, which is attached to a single-speed gearbox.  The coolest bits to look at in this part of the car are the cooling distribution system, which Porsche employees nicknamed the “snake pit.”  This is a series of tubes distributing cooling fluid to various parts of the car – the battery, chargers, motors, etc.

Finally, we get a quick look at the interior all stripped down.  Here you can see the top side of the battery and Porsche’s “foot garage.” 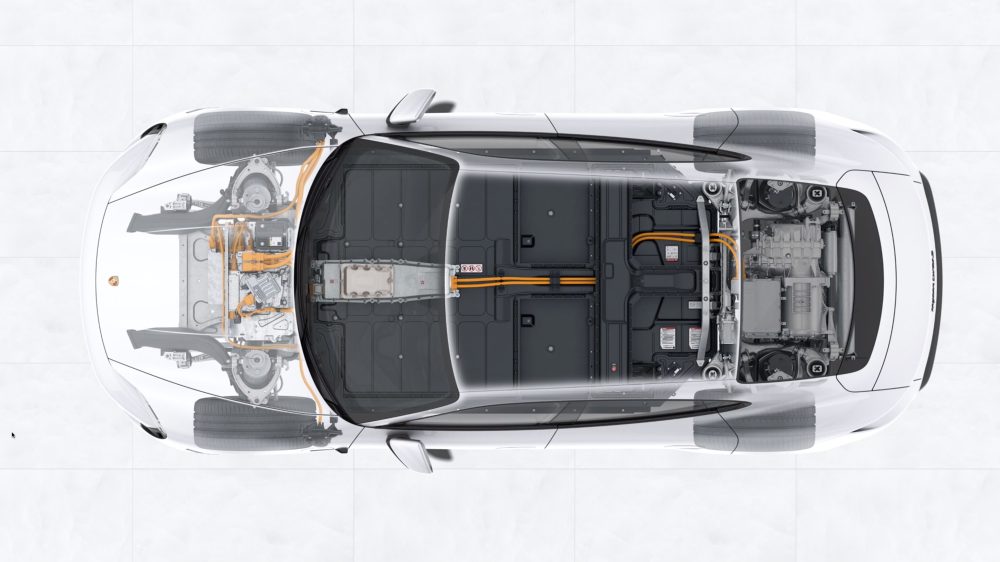 Rather than making the battery one flat plane across the entire bottom of the vehicle, Porsche rearranged the battery at the rear to provide more passenger foot room.  They carved out a chunk of the battery pack at the rear passenger footwells, then put extra battery modules underneath the rear seats and along the centerline of the car where a driveshaft might normally go.

This should make the car fairly comfortable for the standard four-passenger configuration.  Porsche will sell a “2+1” rear seat option which we have not seen but, if the battery stays in the same spot, that middle passenger better have pretty short legs.

In the front, this “driveshaft” continues and the battery management system components are placed underneath the traditional center console area between the front seats.

And that’s it for the tour of Porsche’s hot new electric sportscar.  Now all that’s left is for us to take it for a drive and let you know how it runs (hint hint, Porsche).

Check out the full video for yourself below: