New patent applications are flowing for upcoming all-electric pickups. The future electric F-150’s front trunk can be accessed without opening the hood. The F-150 will have multiple battery-storage compartments, creating the possibility of individual motors for each wheel. The Rivian RT1’s tailgate has multiple hinges for greater flexibility, and an extra battery pack could be added to its cargo bed. All kinds of possibilities open up when you ditch the engine.

A Ford patent for the electric F-150’s front trunk was issued on December 17. The abstract of the patent filing reads as follows:

We interpret this to mean that the hood can remain closed while a section used for the front compartment swings open. The lights on that compartment provide visibility to its contents. If swung back toward the front of the vehicle, the lights also shine into the back storage area. This seems like a smart use of the space for a pickup application. 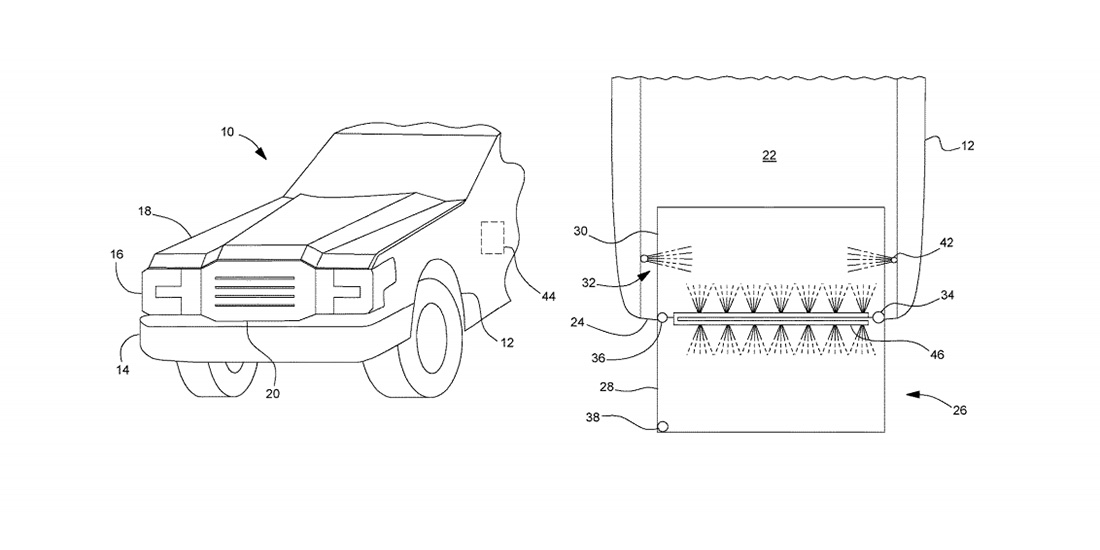 Earlier this month, in a separate patent application, Ford described a new approach to packaging batteries in the vehicle’s platform. In the design, cross-members mounted between the left and right frame rails provide separate battery housings.

The patent’s Abstract explains that a “plurality of power storage modules is disposed within a plurality of compartments.” The approach suggested a modular design for various battery-pack sizes to add range. The crossbeams also would create a stronger, safer structure for heavy-duty applications.

The patent also describes how the design could be used to power each wheel with its own motor, an approach taken by Rivian. Keep in mind that Ford invested $500 million into Rivian. 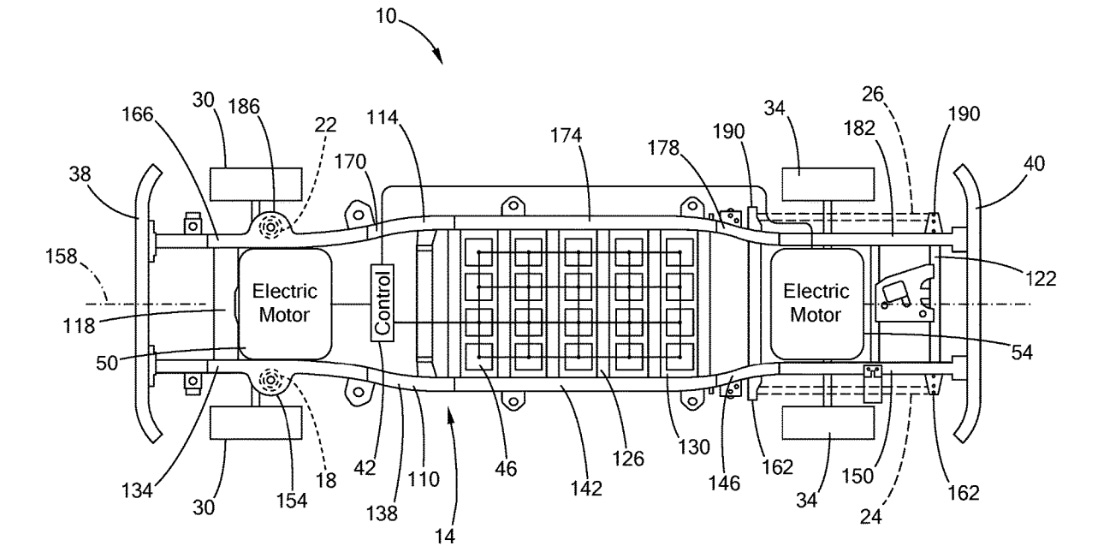 The battery-powered F-150 is expected in 2021. Meanwhile, in a patent published a week ago, Rivian reimagines the tailgate for its R1T pickup. Rivian made a splash when it first revealed the R1T, which features unexpected storage areas, including a passthrough compartment between the bed and the cabin’s rear seat.

A conventional truck’s tailgate door restricts some access to a pickup’s bed. But Rivian adds hinges to free up the movement of the tailgate and how it stays in place. It could be electrically controlled. In the patent, Rivian admits that the new design means the tailgate will protrude to the back of the vehicle, sometimes blocking a user to stand close. 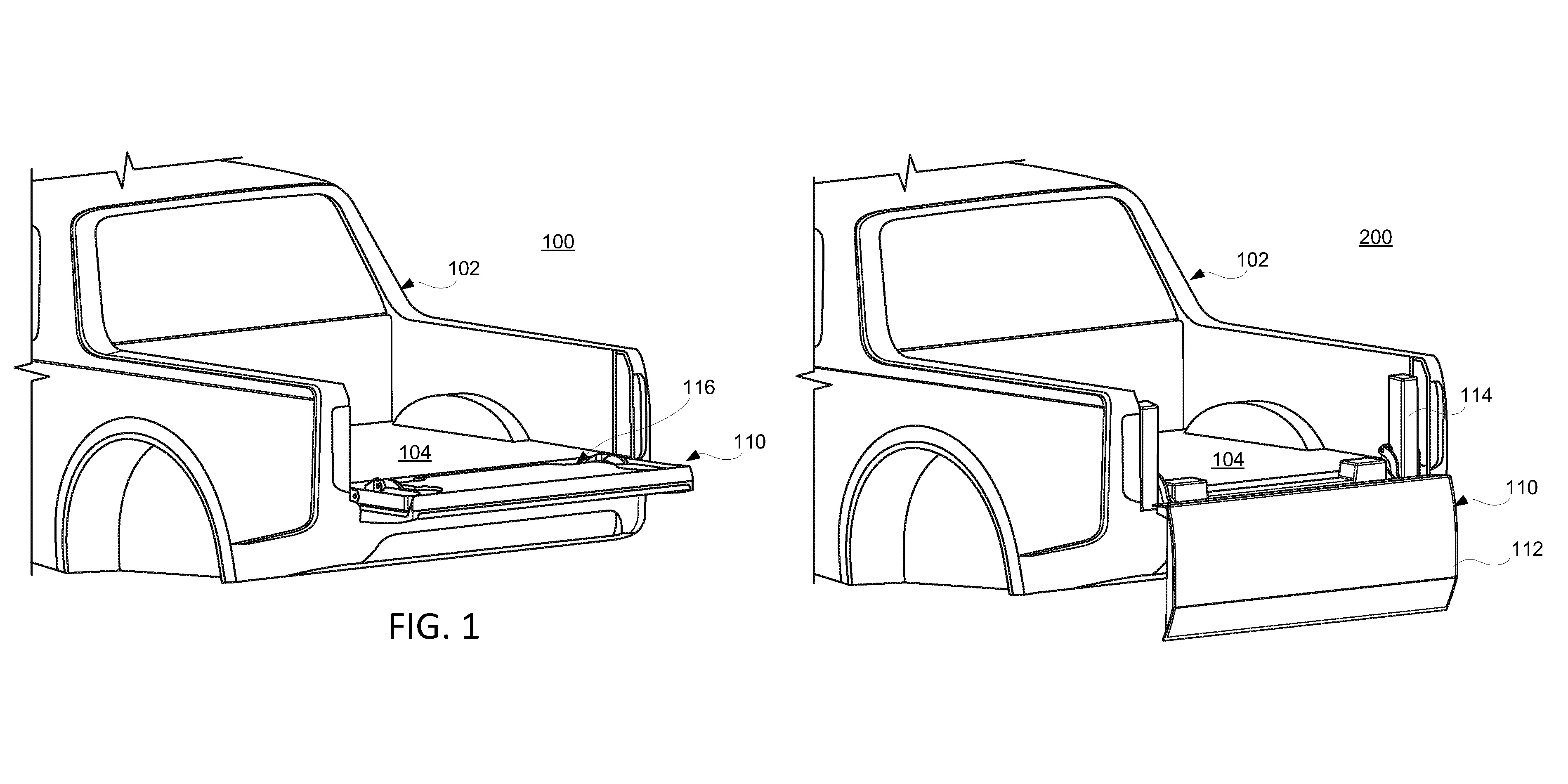 Here’s a section of the Abstract describing what Rivian dubs as a “Swing and Drop Tailgate.”

The swing and drop tailgate can undergo a rotation motion about a hinge, as well as a swing down motion via a linkage. The swing-down motion allows closer access to the bed and extends less far from the rear of the vehicle as compared to the drop motion. The motions may be manually controlled, or actuator controlled. One or more latches may constrain motion, or prevent, of the tailgate. A tailgate assembly may include a post assembly and a tailgate that may move together as a rigid body when dropping, or move relative to one another when swinging.

Rivian rejected the idea of a side-hinged tailgate because it requires more clearance and doesn’t create as much usable space. Rivian’s multi-hinges solution allows for more flexible movements that adapt to a user’s needs, especially to swing straight down behind the vehicle for easier loading and unloading.

The Rivian R1T pickup is expected around early 2021.

Patents filed by Rivian earlier this year revealed a modular design that would allow an auxiliary battery pack to be added to the vehicle’s cargo area. It’s described in the patent’s Abstract:

The other earlier patent apparently relates to a vehicle-subscription business model, in which a shared vehicle could be significantly reconfigured for multiple uses.

Meanwhile, we have only begun to see the list of creative design features from the Tesla Cybertruck. News this week emerged that the Cybertruck’s heating and air conditioning system could work in the truck’s bed area when the cover is closed. The bed will also be accessible from the second row to create a “camper mode.”