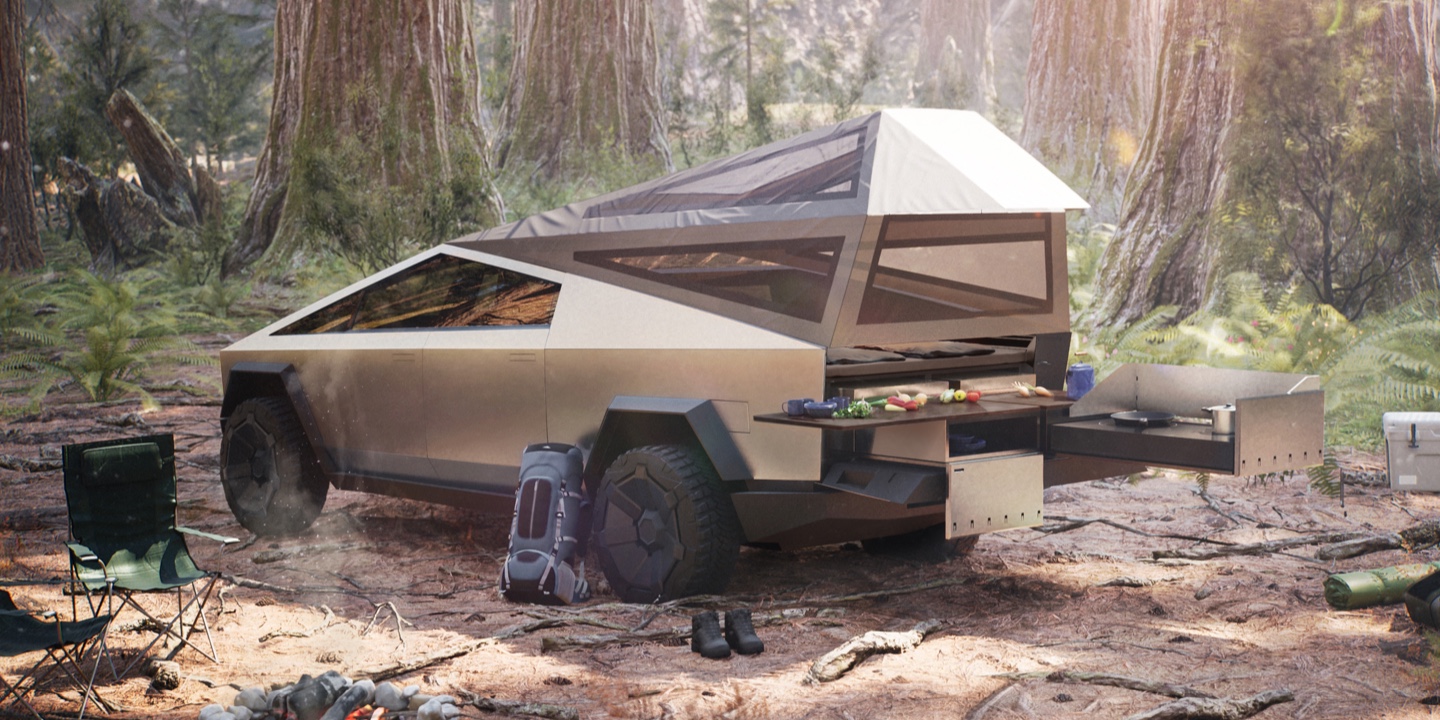 We’ve learned a lot about the Tesla Cybertruck, but there are still a number of open questions. Tesla CEO Elon Musk went to Twitter to answer a few tonight, showing several ways that the Cybertruck could become an ultimate camping machine.

In response to a fan, Musk stated that the Cybertruck’s heating and air conditioning system will work in the truck’s bed area when the cover is closed, that the bed should be accessible from second-row seating, and that the Cybertruck will likely have Tesla’s “bioweapon defense mode” air filtering system.

We’ve talked before about the possibilities of camping with the Cybertruck. This mostly focused on third-party add-ons, like fifth-wheel campers that could be towed by the Cybertruck.

Along with a possible solar roof add-on and Tesla’s already-shown camper configuration, these could combine to make an amazing camping machine.

But without add-ons, the Cybertruck should already be great.  Current Tesla vehicles already have a “camper mode” that allows the AC and heating to stay on all night, keeping the car cool or warm depending on the outside environment.

This uses energy from the battery, but given that Teslas have such large batteries, it’s usually enough to run overnight. This will be particularly true with the Cybertruck and its even-larger battery.  If connected to an off-board power source like an RV hookup, the car can also charge up while running HVAC.

We’re sure Tesla will have a camper mode, but it looks like Tesla is working on making Cybertruck even better as a camper mode vehicle. In a Twitter thread posted a couple weeks ago, an owner asked for several features, which Musk stated were “some good ideas.” There are certainly some good ideas there, though we’re not sure which ones will make it into production software.

Then, Twitter user @acevedo_lex asked specifically about the Cybertruck:

Can the #CYBRTRK pump the HVAC to the truck bed when the tonneau cover is closed for sleeping and camping? is there access from the 2nd row? Also does it have the bio defense filter system?

Previously, we weren’t sure whether the second row and bed had a pass-through, but seeing videos of the bed cover rolling down suggested that perhaps, if the window behind the second row could be opened, it might be possible to reach (or even climb) fully into the bed while the cover is closed.

At the very least, we know that HVAC will cover the closed bed. This means “camper mode” could be used to keep the bed warm or cool when people are using it for camping purposes.

For the next two questions, Musk answered that the bed will “probably” be accessible from the second row, and the car will “partially” have “bioweapon defense mode,” which is present on Model S and X.

Or perhaps he means that the cabin will have bioweapon defense and the bed won’t, and that they haven’t decided yet on whether to have full second-row access to the bed.

Regardless, the picture we are getting from these answers is that Cybertruck will be fantastic for camping. Even without the camper add-on, there would be a good amount of room in the bed to sleep (more than in the Model S), and it would be usable even in hot or very cold weather due to the ability to use HVAC.

Plus, if you park it out in the wilderness, then nobody can see you driving such a…“controversial”-looking vehicle. So, that’s a plus.

What do you think about the Cybertruck’s camping possibilities? Have any other clever ideas for add-ons?  Let us know in the comments below.