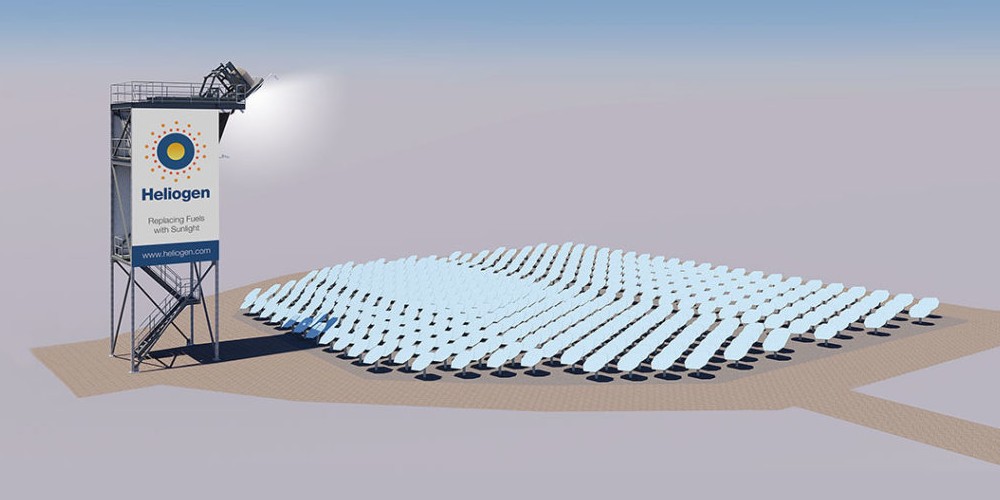 Heliogen solar in the Middle East

As Electrek reported on November 19, Heliogen, the Bill Gates-backed solar startup, “has created the world’s first technology that can commercially replace fuels with carbon-free, ultra-high temperature heat from the sun.”

And as the Middle Eastern website the National reports, there is great interest in Heliogen’s breakthrough techniques that can be used to allow heavy industry to replace fossil fuels with solar, thus cutting carbon emissions. “More than 1,600 companies have sent inquiries to Heliogen since it unveiled its technology at its facility in Lancaster, California, last month.”

Bill Gross, founder and chief executive of Heliogen, told the National that Heliogen is actively targeting the Middle East to encourage the region to move away from fossil fuels and utilize the abundance of untapped solar power:

[Saudi Arabia and the UAE] have the money, they have the land, they have the sun, they have the will, they talk such a great story of their vision for how they want to transform their economy. They will still be making fuel, it will just be fuel that didn’t come from digging. It will be fuel that came out of the air, from water and air.

We’re picking the first customer now. It’s probably going to be a mining or minerals company in the Mojave Desert [in California] where I can show it at a big enough scale that Saudi Arabia can copy it.

Goldman Sachs CEO David Solomon wrote in a Financial Times op-ed that “to give us the best chance of combating climate change, governments must put a price on the cost of carbon, whether through a cap and trade system, a carbon tax, or other means.”

The banking giant also announced that it’s overhauling its environmental policies, including “targeting $750 billion in sustainable finance growth themes by 2030″ and curbing the funding of fossil fuels.

Goldman Sachs revised its Environmental Policy Framework for the first time since 2015.

The bank will not finance any new upstream Arctic oil exploration or development or any new coal-fired power generation project unless it also includes carbon capture or emission cutting.

The bank will work with mining companies to cut emissions, and companies’ progress on cutting emissions will impact future financing. However, Solomon said, the bank will “continue to support clients in transactions that are important to economic activity.”

Electrek firmly believes that the most effective way to promote green energy is with a carbon tax.

An observer’s perspective on COP25

Danielle Endres is a professor at the University of Utah who specializes in science and environmental communication research.

Endres was an observer at the United Nations Framework Convention on Climate Change’s 25th Conference of Parties (COP25). She wrote an op-ed for the Salt Lake Tribune about what she witnessed in Madrid during the summit. Following is an excerpt:

As I witnessed a surge of youth-led activism in response to the COP25 negotiations in Madrid, I was alarmed and disheartened to see so little news coverage of the COP25 back home.

I would have expected to see much more coverage of the negotiations, the alarming scientific evidence presented by the Intergovernmental Panel on Climate Change (IPCC) and World Meteorological Organization (WMO), and the pressing need for the largest emitters, including the US, to take swift and decisive measures to reduce our greenhouse gas emissions if we have any hope of limiting global warming to 1.5 degrees.

One thing that became very clear while I was in Madrid is that there are people paying attention. In addition to the climate march in Madrid that drew an estimated 500,000 people calling for real government action on climate change, nearly every day inside the hallways of the COP25 convention activists, air protectors, and concerned youth staged events that called attention to the impending impacts of the continued climate crisis.

Despite the best efforts of cities, states, and other sub-national government’s efforts to reduce greenhouse gas emissions… addressing the climate emergency requires national and international efforts. It requires working within the UNFCC framework to strengthen the Paris Agreement, and calling on the largest emitters to act with urgency and resolve.