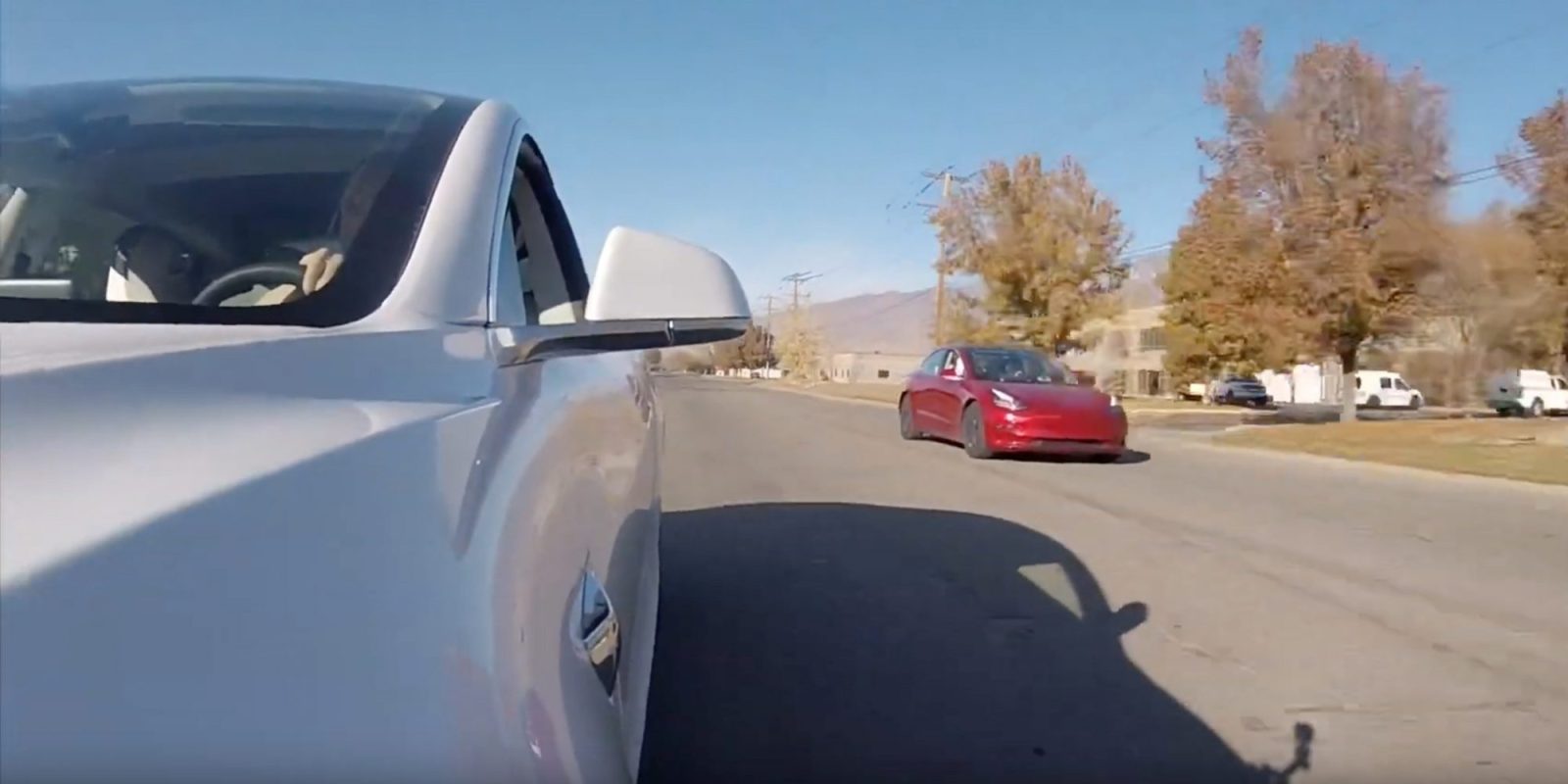 Tesla recently increased vehicle performance by ~5% through an over-the-air update, and today we have a video confirming the improvement with some side-by-side testing.

The video was posted to YouTube by Tesla owner Jenny Walsh, and was conducted on two identical dual motor long range Model 3s, one with the update and one without.

Both cars had their batteries at the same state of charge — 190 miles on the range meter — and their tires inflated to the same psi.  Both cars drove with the windows down. The owners are good friends and have drag raced their cars against each other before, and always ended up with pretty close races.

However, the cars did differ in terms of weight: The red car without the update had a passenger, whereas the white car with the update did. But Walsh said, “I [the passenger] only weigh 115 pounds, and the driver in the red car also weighs less than the white car driver.”

The difference in occupant weight (<115lb) probably accounts for ~2% of the weight of a ~4,000-lb Model 3, which is smaller than the 5% power difference promised by Tesla’s update.

Update: Walsh contacted us and said they took a closer look at the weight difference between the cars after seeing comments on the video.  The red car had 275lbs of humans and no cargo, and the white car had 167lbs of people and 82lbs of cargo.  All in all, the difference was about 30 lbs, which is quite minuscule.

So this wasn’t a perfectly scientific trial, but pretty close.  And the three tests show a clear winner:

In all three, the updated white Tesla pulls ahead significantly, showing an increase in power.

Others have tried putting the power increase to the test and have shown improved results as well.  Reddit user 22marks posted results from Dragy, a GPS-based performance monitor. He found that the update resulted in about a tenth of a second improvement in 0-60 times.

Tesla has promised that the update will improve Model S drag race performance even further, after a drag race test surfaced showing the Taycan beating the Model S Ludicrous. Some Tesla fans pointed out that the drag race test may have been an anomalous result, as the Model S performed worse than expected.

We’d like to see the last couple differences taken away and have a test with truly equal cars, including the same weight load inside them. Perhaps swapping drivers, doing a few more trials in the opposite direction, and so on.

But this is the first side-by-side we’ve seen, and it’s clear that there was a significant difference between the two cars, probably more than can be explained by the small difference in weight.

Plus, the white car even managed to overcome the red car’s natural advantage of being painted red. As we all know, the red ones go faster.

This just goes to show that Tesla’s software advantage is a really big deal. Not only can Tesla update UI elements, but occasionally they’ll even improve performance through a simple, free, over-the-air update.

No other manufacturer is doing this kind of over-the-air update yet, and the concept of giving customers free power seems like the kind of thing traditional manufacturers wouldn’t do. They would likely rather sell a new model year car with some minor performance improvement than give existing customers something for free.

But we’d love to be proven wrong.