There’s no doubt that Honda fell behind on electric cars. Beat up the company as much as you like about its meager EV offerings to date. But also consider signs that the Japanese automaker is slowly correcting its course. In addition to introducing the small Honda E in Europe next year, Honda is working on a second EV for about 2022. Other small victories include quitting diesel, putting hydrogen indefinitely on hold, and agreeing with California’s emissions standards.

In late October, at Honda’s “Electric Vision” event in Amsterdam, the company said it was “electrifying” its entire product line, which mostly means hybrids. But hold on. Tom Gardner, senior vice president of Honda Motor Europe Honda, also said, “We will bring further battery-electric products to the market.” The company is starting to talk the talk, a good first step.

The retro all-electric Honda E city car will arrive on European roads in summer 2020. Unfortunately, the $33,000 small EV with a 35.5-kWh pack (offering about 125 miles of range) is not coming to the United States.

Honda will focus its EV efforts first on Europe, where electric-car demand is on the rise. Gardner told Driving.co.uk that the electric car market in the UK grew from 2% in 2015 to 7% or 8% today. “It’s beginning to be significant,” he said.

European emissions regulations are also a chief motivator. “The pace of change in regulation, the market, and consumer behavior in Europe means that the shift toward electrification is happening faster here than anywhere else in the world,” Gardner said.

In addition to the Honda E, the company will introduce a second EV, according to Driving.co.uk. There’s not much info about the second EV, except that it will be revealed by 2022.

Two small EVs in the next two years is a slow start. Nonetheless, Honda is saying that EVs are very much in its future, along with hybrids.

At the same time, diesel, hydrogen, and plug-in hybrids are on the way out. Katsushi Inoue, Honda Europe’s president, said:

Maybe hydrogen fuel cell cars will come, but that’s a technology for the next era. Our focus is on hybrid and electric vehicles now.

Plug-in hybrids are not part of Honda’s plan for Europe. And, thank goodness, neither is diesel. In September, Honda said it would phase out all diesel cars by 2021.

The service launches in the UK and Germany in 2020, with other European countries to follow. It would also pave the way for vehicle-to-grid solutions. 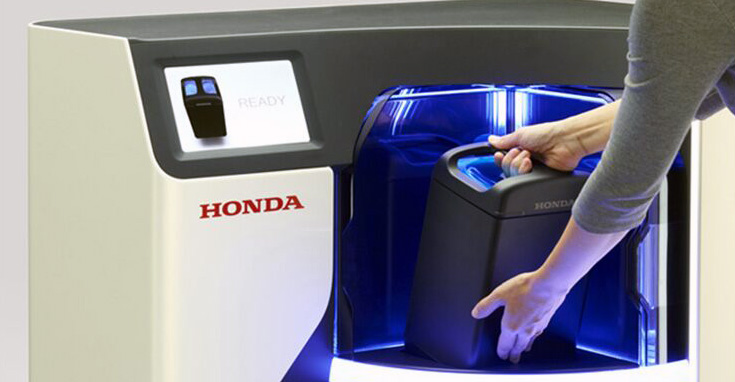 Thinking even further outside the box, Honda once again exhibited a creative solution for electric-scooter owners in Asia. At the recent 2019 Tokyo Motor Show, Honda showed a vending machine that provides swappable one-kilowatt-hour batteries. The concept was unveiled at CES 2018. The so-called Mobile Power Packs — about the size of a gallon jug of milk — would allow electric-motorbike drivers to drop off a spent power pack and pick up a new one.

It’s a bummer that drivers in the US will have to wait at least a few more years for a legit Honda EV. The Japanese automaker is developing a modular EV platform for larger rear-wheel-drive and all-wheel-drive vehicles with longer range for the United States. But that’s not expected for an eternity, not until about 2025.

In the meantime, we’ll have to watch from afar as Honda focuses its EV efforts on Europe — and continues to display cute conceptual charging ideas.

We would much rather see Honda immediately bring EVs to the US ­— especially the adorable, rear-wheel-drive Honda-e. But a consolation prize is the company clearly stating that diesel is dead and hydrogen is an era away (at best). Honda should also be cheered for joining BMW, Ford, and Volkswagen in agreeing with California’s legal authority to set emissions rules.