Before Tuesday’s election, Virginia’s Democrats actively campaigned on setting a target of net zero emissions by 2050, and the Green New Deal Virginia. The latter “proposes to create thousands of good jobs while addressing the climate emergency and restoring Virginia’s environment. Our collective efforts will redress two of the biggest crises we face: climate change and inequity.”

Democratic Governor Ralph Northam could now fulfill his desire to bring Virginia into the Regional Greenhouse Gas Initiative (RGGI), as he’ll have legislative backing. Democrats have taken control of both the Virginia Senate and House for the first time in more than 20 years. The RGGI is a “cooperative effort among the states of Connecticut, Delaware, Maine, Maryland, Massachusetts, New Hampshire, New York, Rhode Island, and Vermont to cap and reduce carbon dioxide emissions from the power sector.”

Ahead of the election, polls showed that more than 60% of Virginians wanted their government to do more about climate change. Young Virginia voters said climate change was a top-tier concern. Candidates like Joshua Cole, who won the election for Virginia’s 28th House District, campaigned on environmental action, including upgrading infrastructure to make it more resilient and deploying clean energy.

Climate change isn’t the only issue for voters, and it’s different for every state. But in Virginia, it was definitely a major driving force for voters’ decisions.

“This was the first time I’ve voted for both parties depending on… the person. Is that weird?” said Elizabeth Sandhu, of Clifton, Virginia, who cited the environment as a top issue.

Collins Dictionary has announced their word of 2019: “climate strike.”

(Ok, for all you fellow pedants out there, I also see that it’s actually two words, so let’s go with the term “phrase,” but hey, it’s Collins‘ prerogative.) 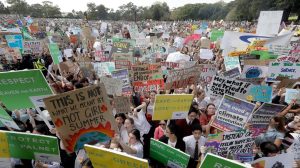 The phrase was made famous by Swedish environmental activist Greta Thunberg’s #FridaysForFuture movement. It was also used in November 2015 after a protest event took place near the UN Climate Change Conference in Paris.

[The politically charged atmosphere of recent years] was clearly driving our language. Climate strikes can often divide opinion, but they have been inescapable this last year and have even driven a former word of the year.

Newstead is referring to 2018’s word of the year “single-use” (OK, phrase again), which refers to disposables that are used once and then thrown away.

New Zealand has set a target of going zero carbon by 2050, passed near-unanimously through the parliament with the leadership of Prime Minister Jacinda Ardern.

New Zealand’s target is ambitious compared to other nations but really isn’t enough. Currently, the world is at ~410ppm carbon, and rising at a rate of ~2-4ppm per year.  Scientists acknowledge that the safe level of carbon dioxide in the atmosphere is 350ppm.

To reach this target, we need to go carbon negative, not just carbon neutral.  This means active removal of carbon from the air through carbon scrubbing, tree planting, or other sequestration schemes.  And we don’t have until 2050 to get on this path.

We applaud New Zealand’s direction, but more needs to be done.—Jameson Dow

Rhode Island’s Block Island wind farm, the first offshore wind farm in the US, is clearly good for the production of green energy, but who knew it’d be a cool fishing spot, too?

David Bidwell, assistant professor of marine affairs at the University of Rhode Island, is conducting a study about how the wind farm is impacting recreational anglers. So far, Bidwell has surveyed a random group of around 200 anglers who hold saltwater fishing permits. His thoughts so far: 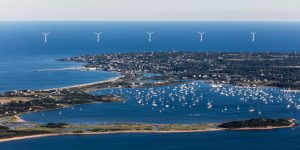 Anglers believe it has improved fishing in the areas very close to the turbines — there seem to be more species and more fish there.

The wind turbines are a technological wonder and people want to see them and see how they work.

The turbines are acting as artificial reefs. Energy News explains:

One focus group participant who was practiced in spearfishing… told researchers that the underwater support structure for the turbines was ‘loaded’ with mussels and crustaceans, and was attracting scup, mahi-mahi, and striped bass.

But there is also wariness that the site may become too popular with recreational boaters and anglers. And if the turbines encourage the fish population, great, but let’s not overfish. The study is ongoing.

Late last week, the UN announced that Spain would host the UN climate talks from December 2 to 13. The talks will be in Madrid.

Spain is stepping in after Chile withdrew as host, due to the South American country’s fraught political climate over the last two weeks. Riots over inequality have left at least 18 people dead there. However, Chile will still assume the climate talks’ presidency.

The objective of the talks is to work out the details of the Paris Climate Agreement.

Spain is going to have to seriously scramble: They’ll have to expedite visas and set up an agency to organize travel and accommodation for around 25,000 delegates.

So, thanks, Spain. These talks are pretty darned important. Shame about the US.

We are pleased to announce the COP Bureau has agreed that #COP25 will take place from 2-13 December in Madrid, Spain.https://t.co/4XZBBLOd15 pic.twitter.com/YI12XRaroj

In this week’s episode of Jane Fonda’s Fire Drill Fridays, she was joined by Ben Cohen and Jerry Epstein of Ben & Jerry’s and other protesters on the Southeast Lawn of the U.S. Capitol, and they then marched to the White House. (It appears that Fonda wasn’t arrested this week.)

There is power in numbers and we are HUGE as we head from the Capitol to the White House! #FireDrillFriday pic.twitter.com/0BZX0WyrHN

They discussed ways in which war and the military contribute to climate change. Fonda said, “The climate movement needs to see itself as a peace movement.” Here are the highlights of the rally before the march:

The Hungarian capital will prepare a climate adaptation and mitigation action plan by the end of 2020, and devise plans for making the city carbon-neutral.

Climate change and global warming are already having a serious impact on our daily lives. We have a moral responsibility to leave the best world we can to our children and grandchildren, but not worse than what we received from our parents and grandparents.

Budapest is not yet a member of the C40, a global group of mayors who are leading on climate action, but we wouldn’t be surprised to see Karácsony sign his city up asap.

Mary Ellis Stevens, 14, has been striking for eight months outside the Charlotte-Mecklenburg Government Center in Charlotte, North Carolina. She is often alone. She says she was inspired by Greta Thunberg, and yesterday, the Swedish activist joined her.

So excited to have the one and only @GretaThunberg join my strike this Friday!
See you there, Charlotte! https://t.co/lgsrFLeOs8

Today, Stevens had a whole lot of company: Thunberg and around 1,200 others attended the #FridaysForFuture strike in Charlotte, and both Stevens and Thunberg spoke to the crowd.

The Charlotte Observer noted some of the ways in which climate change has affected North Carolina in their coverage of yesterday’s march (their sources were the EPA and the North Carolina Climate Office):