Riding through the south German countryside between rows of farmland, there was nothing to give me a sense of time. The green fields were dotted with rickety old barns as I blew past on my vintage-looking scooter. The only clue to remind me that I wasn’t living out a 1960’s Eurotrip fantasy was the soft whirr of the electric motor on my Kumpan electric scooter – a sound that surely would have been replaced by an abrasive “putt putt putt” on a scooter like this decades ago.

The sport model gets up to 100 km/h (62 mph), which is a heck of a lot of fun on a nearly silent electric scooter. You hear nothing but the wind around your helmet and feel no vibrations except for the buffeting of wind on your face. It’s the ultimate pleasure ride.

Behind me is Electrek’s founder and publisher, Seth Weintraub. He must have drawn the short straw because he’s currently playing catchup on the Kumpan 1954 Ri model electric scooter. Note the lack of the ‘S’, which means his model is limited to either 45 or 75 km/h (28 or 47 mph), depending on local regulations. This specific one gets the faster of the two settings, but it’s still no match for my sport scooter.

These scooters are the textbook definition of synergy. The classic design is melded with the latest in electric scooter technology to produce a vehicle that is fast, futuristic, and fun to ride (and to be seen on!)

You’ll absolutely want to see these scooters in action, so check out my video review below. Then read on for the whole experience! 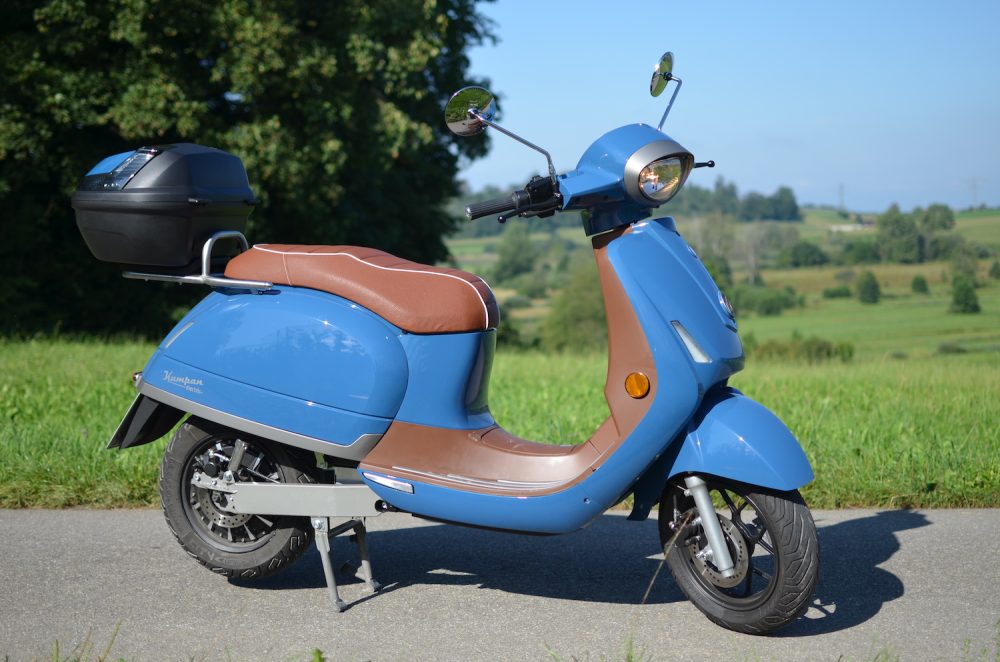 The scooter has more than enough power off the line to bring a goofy grin to your face every time you grab a handful of throttle. I even did a little inadvertent off-roading and could easily fishtail the scooter around, though the sporty tires certainly weren’t helping gain traction in the grassy fields. Those are better suited to street riding, along with the rest of the scooter.

The brakes are powerful hydraulic disc brakes that provide plenty of stopping power.

The Kumpan 1954 Ri S has slots for 3 batteries under the seat giving it a range of up to 120 km (75 mi). Each battery has a convenient carry handle and an LCD battery percentage readout directly on the battery itself. You’d use the scooter’s main color screen to check battery capacity while riding, of course. But a second small screen on each battery means you can check battery charge level even when the batteries are disconnected from the scooter, such as if you brought them inside for charging.

The whole scooter feels really well built as well. I even accidentally sent mine on a bit of a tumble when I parked on some loose dirt on a hill to grab some photos.

I might have forgotten to mention that to the Kumpan team that let us borrow the scooters for the day, but partway through my impromptu photoshoot, my scooter succumbed to gravity on the uneven grassy hill I had haphazardly parked it on and went horizontal quickly. But after picking it up and dusting it off, the Kumpan 1954 Ri S looked as good as new, minus a bit of dirt and grass in its teeth. And on its handlebar end. And mirror. And pillion peg. But still solid as a rock, which is what you want out of a scooter like this – especially when you’re paying these prices.

Speaking of which, the Kumpan 1954 Ri S is no bargain scooter. It starts at €6,999 including VAT, or around US $7,700. And with a number of interesting customization options, the price can increase from there.

But you aren’t just paying for the high speed, the powerful motor or the retro design. It’s also the infused technology that helps this scooter command the big bucks. 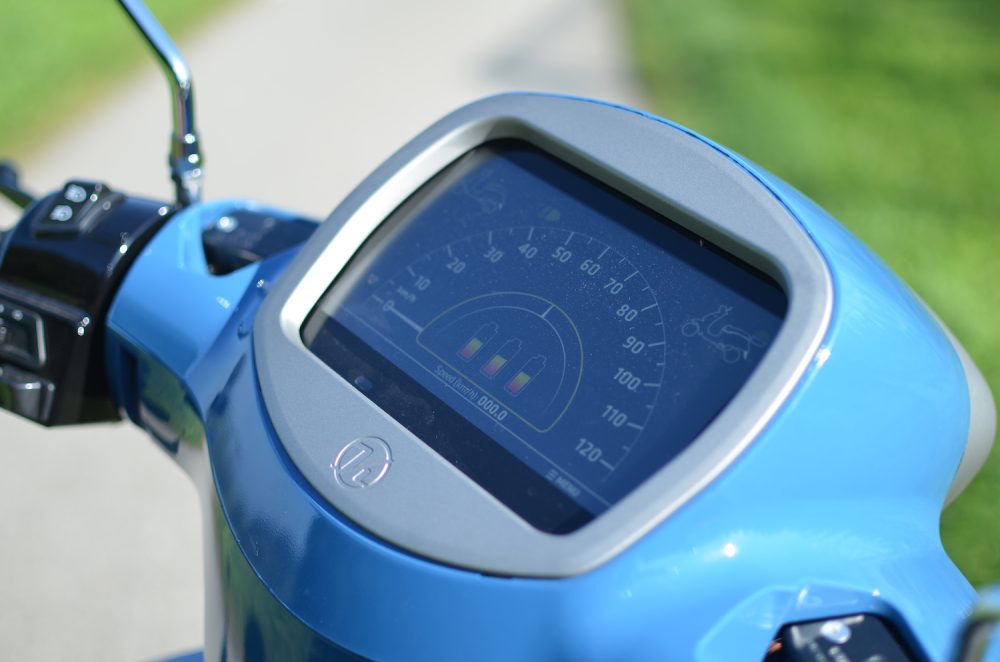 The beautiful, 7-inch touch screen is host to a number of different commands and adjustable settings. Everything from the key-less unlocking and starting of the scooter to opening the battery compartment or the rear cargo box is handled digitally via the touch screen. You never have to take your keys out of your pocket.

You also have complete control over options including the drive modes, adjusting the strength of the regenerative braking, setting range warnings, adjusting the sensitivity of the screen, searching for updates to the scooter’s operating system and more.

The interface is also beautifully designed with a large analog-style speedometer. Call me old fashioned, but I always prefer analog gauges when possible. Part of it is nostalgia, and part of it is their easy readability at a glance. And while the large color touchscreen is as digital as it gets, it still does a nice job of replicating an analog-style readout.

All in all, I simply had a blast on the Kumpan electric scooters. The 1954 Ri S is definitely my favorite due to its higher power and speed, but even the lower power 1954 Ri was still a ton of fun.

The scooters are pricey, there’s no getting around that. But if this is your main vehicle and its high speed allows you to go on nearly any road you need (and to many more places that cars can’t go), then I can see how it’d be worth it.

What do you think of the Kumpan 1954 Ri S electric scooter? Let us know in the comments below!