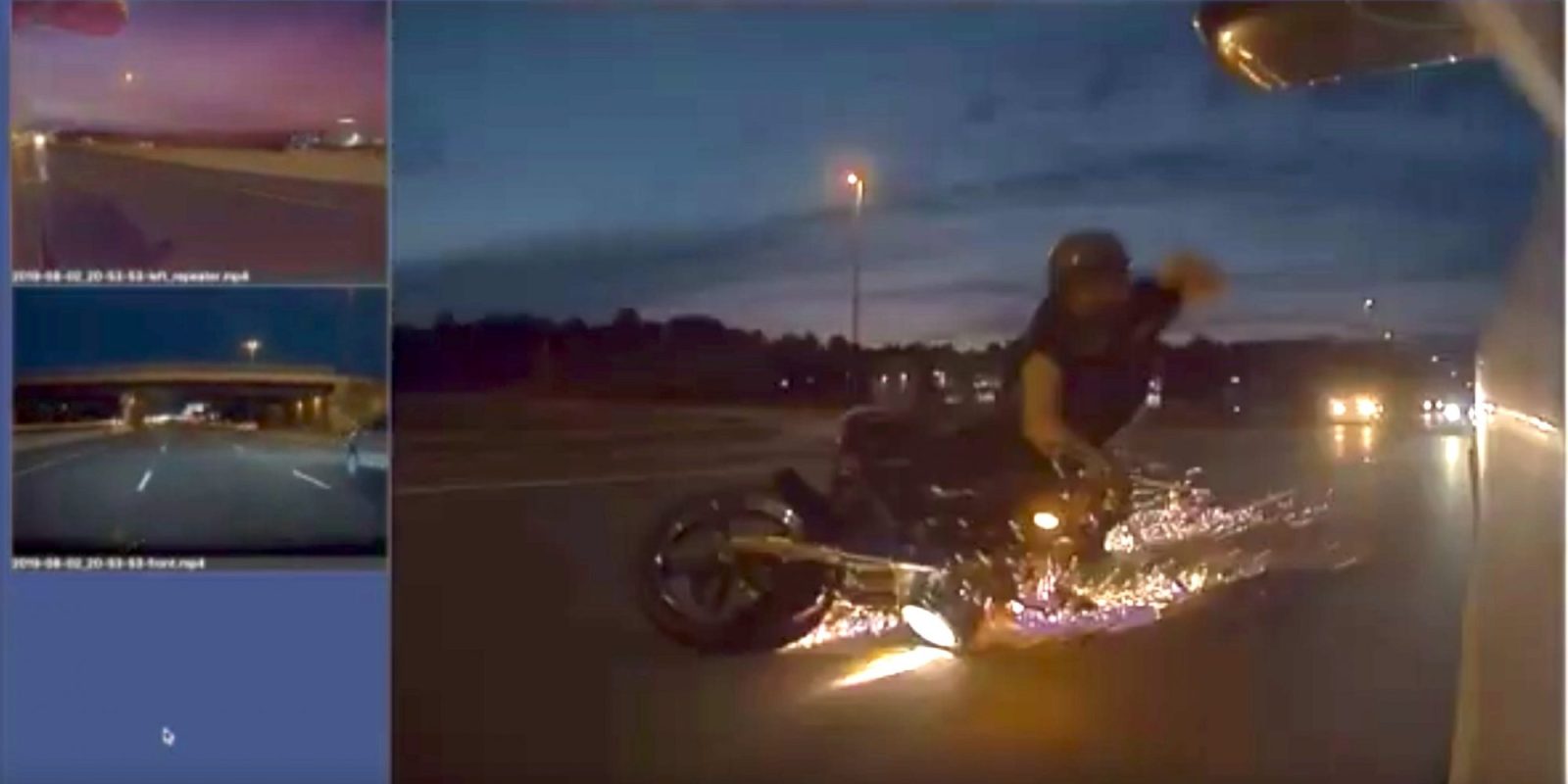 There’s been no shortage of crazy occurrences captured by Tesla’s dashcam and sentry mode features lately, many of which have gone viral.  Lots of these videos have involved Tesla crashes, random incidents of vandalism, or just fun stuff like a car stopping for some bears crossing the road.

But TMC forum user “rajetta” may be the most relieved owner of all the stories we’ve heard yet.  He posted Tesla dashcam video of an incident he had with a motorcycle on the highway, which could have cost him potentially hundreds of thousands of dollars in legal bills were it not for this video footage.

This Tesla crash happened three months ago, after which rajetta posted the footage and then deleted it since the case was still in court.  Since it’s now out of court, he’s posted it on the internet again as a testimonial for his Tesla’s technology features.

In the video, the Tesla can be seen driving on the highway, in a middle lane at a relatively normal pace with nothing special going on.  A few cars pass him, and then he starts to change lanes to the leftmost fast lane.

Then suddenly a motorcycle headlight appears from behind his car.  The motorcycle crashes into his rear right fender and the motorcyclist goes skidding across the highway, nearly being hit by a car in the right lane.  There is no footage available from the rear backup camera of the incident, as this event happened three months ago, before that update had been pushed to the fleet.

The motorcyclist does seem to have walked away from the crash, though probably not without injury (especially with those short sleeves).  Afterward, rajetta claims he was ticketed for reckless driving and that the motorcyclist gathered 3 witnesses stating that the Tesla had swerved into him without using its turn signal.

Rajetta says that when the police and prosecutor saw the Tesla dashcam footage, they dropped charges against him.  Under normal circumstances, the combination of eyewitnesses and police testimony would have resulted in a sure-fire loss in court for the Tesla driver.

This could also have also led to a civil lawsuit by the motorcyclist, who could recoup medical costs and pain and suffering costs from the Tesla driver (or his insurance company) potentially in the hundreds of thousands of dollars.  These sorts of cases are not abnormal in the American justice system.

This has to be one of the more relieved Tesla owners out there.  While the many keying incidents we’ve seen can result in thousands of dollars worth of damage, this one could have ended up costing hundreds of thousands.  Quite the dodged bullet.

In all likelihood, he didn’t even buy his car with the Tesla dashcam feature in mind, as it was delivered relatively recently in a software update for free to all owners.  And now that he has it, he’s managed to save a tremendous amount of stress and possible financial ruin thanks to this simple piece of software.

We don’t know the motivations of the motorcyclist; in all likelihood, it was just an accident and he and his other witnesses may well believe that they saw the Tesla change lanes into him.  Eyewitness testimony is quite unreliable according to a number of scientific studies, and people really can remember things that didn’t happen.

But if eyewitnesses are the only evidence available, then those stories are all the legal system has to go on.  And when there’s one injured party, people will tend to take the injured party’s side.  Which is why it’s so important to have good evidence to show what really happened, and why it’s so good to have Tesla dashcam enabled.

This is one of the biggest strengths of how Tesla updates its software.  A lot of these capabilities are added with the simple thought: “hey, wouldn’t this be cool to have?”  And then, owners figure out neat ways to use these capabilities that the engineers who wrote them never saw coming.

This particular situation is an obvious foreseeable benefit of Tesla dashcam, but the bear post from this weekend shows how it’s not just serious, but also fun.

The same can be said for smart summon – while owners have done some dumb things with it, it’s also proven useful in many surprising ways.  Like helping wheelchair users, or a friend of mine who lives on a car-inaccessible island with an off-site garage and has used summon to move his car out of his parking spot before he parks his golf cart in it.  Again, there’s been a whole spectrum of uses – from solving “first world problems” to actually benefitting people with disabilities.

So while a lot of these functions seem fun and goofy at first, they’re helping people in unanticipated ways that Tesla should be really proud of.  We hope other manufacturers can start offering similar cool software updates, so non-Tesla owners don’t get left out of the march towards the future.

And please, as a final note – stop doing weird things to Teslas, everyone.  Stop keying them, stop breaking into them, and so on.  You’re on video.  It’s not going to work.