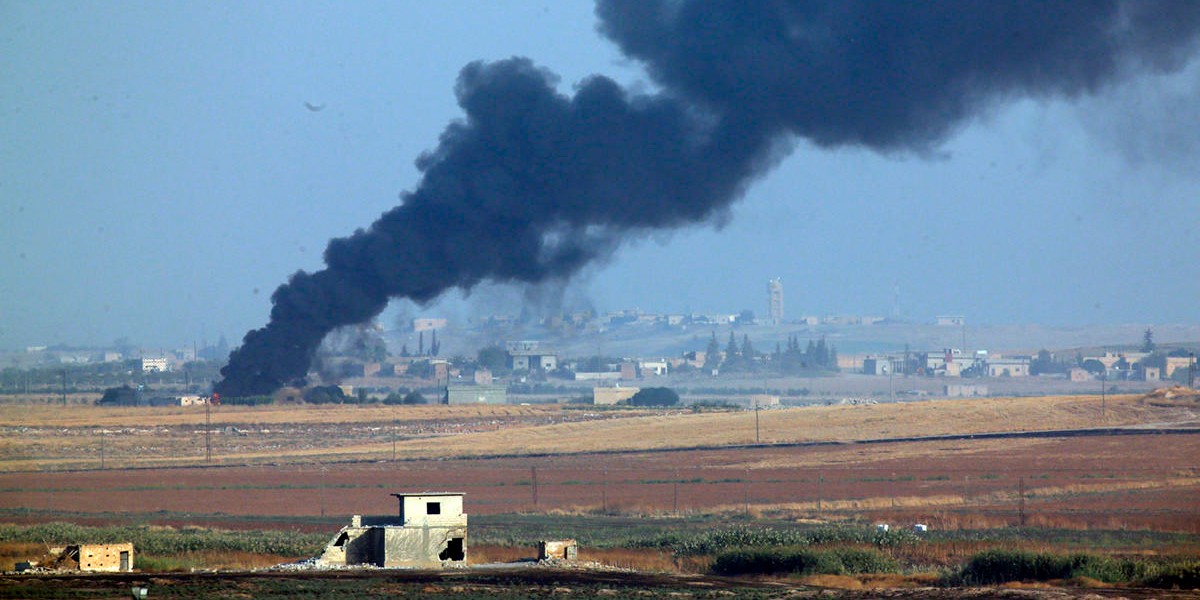 Turkey began attacks against the Kurds in Syria on Wednesday (pictured above) and then moved ground troops into the region after Donald Trump pulled back US troops. Trump’s move attracted bipartisan condemnation in the US legislature for abandoning allies who fought against ISIS.

Today @LindseyGrahamSC and I are announcing a framework for sanctions against Turkey to respond to their military operation in northeastern Syria, which is already underway. These sanctions will have immediate, far-reaching consequences for Erdogan and his military. pic.twitter.com/VhzaDB2OYU

The Graham-Van Hollen Turkey Sanctions Bill, dated October 9, 2019, contains eight sections, the third of which is about energy sector sanctions:

Graham told Axios‘ Jonathan Swan that he predicts he will have more than enough votes to override a presidential veto of the sanctions, saying: “Who the hell supports Erdogan over the Kurds?”

I am pleased to have reached a bipartisan agreement with Senator @ChrisVanHollen on severe sanctions against Turkey for their invasion of Syria.

While the Administration refuses to act against Turkey, I expect strong bipartisan support. pic.twitter.com/Ph5fIVt7k3

Guess who supplies Turkey with petroleum and natural gas? Gas makes up 30% of Turkey’s energy consumption, and over half of that is supplied by Russia. And oil also comes from Russia, as well as Iraq and Kazakhstan.

E-International Relations explained the “ambiguous” energy partnership between Turkey and Russia in September:

The two countries… have managed to quickly resolve their differences for economic purposes related to Russian-Turkish energy interdependence. Since Turkey is currently importing approximately 50% of its gas needs from Russia, Ankara is the second most valuable market for Russian gas after Germany.

Russia needs Turkey’s geopolitical position to gain access to the Black Sea Region, and Turkey needs Russia because of its natural gas imports.

And if it wasn’t already complicated, Russia ratted out Turkey for smuggling in ISIS oil from Syria in 2015. That was the same year that Turkey shot down a Russian jet. Russia supported Bashar al-Assad in the Syrian war, yet supplies Turkey with oil.

The Russian defense ministry also alleged that the same criminal networks which were smuggling oil into Turkey were also supplying weapons, equipment, and training to Islamic State and other Islamist groups.

The health of Turkish-US relations has a direct impact on Turkey’s friendliness with Russia. When Ankara and Washington are close, Turkey’s appetite for exploring ties with Russia as a geopolitical hedge shrinks. But when Turkey is frustrated with the West — as it is now over US support for Syrian Kurdish forces — it finds in Russia a sympathetic ear.

So, now that the US has pulled away from supporting the Kurds, yet declared in the Turkey Sanctions Bill that any foreign person or entity that supplies or supports Turkish energy will be sanctioned, then where does that leave Russia? Will it make the frenemies best buddies, since they’d both be hit by US sanctions should Russia continue to supply energy to Turkey? (Place your bets that it will.) And how can the US prove what Turkish petroleum or natural gas is actually being used for, since the bill specifies “for use by its armed forces”? (If anyone has an answer to this last question, I’d love to read it in the comments section below.)

Moscow is also making economic moves in Syria. Russian oil and gas firms have gained contracts for the exploitation of hydrocarbons in Eastern Syria.

Russia’s stated goal is winning back all of Syria’s territory from rebels and pro-US forces, and Turkey’s cross-border operation could become a longer-term breach of territorial sovereignty.

“A precipitous withdrawal of US forces from Syria would only benefit Russia, Iran, and the Assad regime,” tweeted US Senate Majority Leader Mitch McConnell [R-KY], usually a staunch Trump ally and one of the most vocal critics of the pull-back.

And in case you were wondering amid all this mess about whether Turkey uses green energy, Turkey has plenty of renewable sources, but only hydropower has been developed and averages about one-fifth of its electricity supply. Turkey looks to raise its share of renewables to two-thirds by 2023 but has no plan beyond that. It exports wind equipment and important solar equipment. But China is financing a $1.7 billion coal plant in Turkey.