Do you like a morning coffee? Or two? Yeah, me too. (Caramel latte for me, thanks.) It’s expensive if you indulge in buying coffee out, of course (yes, we’re looking at you, Starbucks and Costa), but the price could get a whole lot higher, thanks to the climate crisis.

The Fairtrade Foundation’s Catherine David, head of commercial partnerships, says that extreme temperatures, flooding, humidity, and pests are seriously impacting Peru’s ability to grow the Arabica bean. Plus, leaf rust disease (pictured above) continues to impact crops after a bad outbreak five years ago. Coffee growers are turning to other crops to survive — including coca, cocaine’s raw material.

Coffee production in Montero, a valley district in Piura, for example, has shrunk from 80% to 20% in the last five years alone.

While now coffee sales have grown and it’s a very popular product and we can pick up coffee from all different price ranges, I think if we don’t invest now, then coffee could become a luxury, longer term.

If 50% of land currently used for coffee isn’t going to be suitable for it by 2050, and coffee farmers are abandoning their farms, there simply won’t be enough coffee, and so we could, conceivably, get to a point where coffee… becomes a premium product for only those who can afford to enjoy it.

So what does David mean by “invest now”? How can you support Peru’s coffee industry? Buy Fairtrade. Eighty percent of it is produced by 25 million smallholders.

And guess what? Starbucks sells it. So let’s look at that $5 latte as half full for now: It could get a whole lot more expensive if we don’t make an effort to support our coffee growers.

We are facing an unprecedented global emergency. Life on Earth is in crisis: scientists agree we have entered a period of abrupt climate breakdown, and we are in the midst of a mass extinction of our own making.

And they wanted to drive that point home with a symbolic spraying of fake blood (made of beetroot) on Her Majesty’s Treasury in London from a fire hose.

Dressed in funeral attire stood on the vehicle — which had a banner reading ‘Stop funding climate death’ on its side — the protesters both criticized the UK’s military role in the Middle East and the UK’s investments in companies that cause vast fossil fuel emissions, and called on others to rebel.

But then it all went a bit berserk: the protesters lost control of the hose, and “blood” went everywhere. It’s not funny that a bystander got drenched in beetroot water, and it’s definitely not funny that eight activists got arrested on suspicion of criminal damage. (Nobody was hurt, but rather, just a bit wet.)

But in a time where there’s not a lot to laugh about, it’s worth watching the video. Because the hose flying wildly around is rather comical. And in the end, Extinction Rebellion got their point across.

Sharks who live off the Eastern seaboard used to swim no farther north than North Carolina in the summer. But three years ago, they were tracked by scientists as far north as Long Island. Why? Stephen Kajiura, a shark expert at Florida Atlantic University, explains on Who.What.Why: 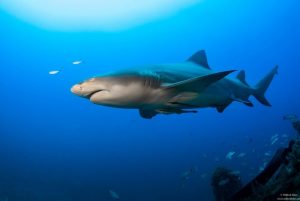 Climate change is really having an impact. Sharks have survived enormous amounts of environmental change, which really is a testament to the stability and the flexibility of these animals. They’re not stuck in a rut, basically.

Professor Tord Kjellstrom, a visiting fellow at the Australian National University’s national center for epidemiology and population health, wrote an op-ed for the Guardian as part of the paper’s Harmed by Heat series.

Here’s an excerpted version of Kjellstrom’s piece about how high temperatures will pose an increasingly serious threat to workers:

As the number and intensity of hot days increases, more and more working people will face even greater challenges to avoid heat stress, particularly the two-thirds of the global population who live in tropical and sub-tropical areas. Heat exhaustion threatens the livelihoods of millions and undermines efforts to reduce poverty.

The International Labour Organization estimates global productivity losses equivalent to 80 million full-time jobs could occur by 2030 in the hottest countries.

A migrant worker in Qatar or a sewing machine operator in Vietnam often have little control over their working environment… Global heating is a serious threat both to workers’ lives and the livelihoods of millions of people. Emerging policies on climate must take this into account if we are to have any chance of getting to grips with what is ahead.

Greta Thunberg may be the world’s most famous teenage climate activist, but there are young people all over the world doing their part to clean up our planet. Meet Shania Hurtado, a 16-year-old environmentalist who wants Houston, which she calls “the oil and gas capital of the country,” to become ground zero for green energy. [via Bloomberg TicToc]

"Houston is the oil and gas capital of the country."

Fact-checking website Snopes turned their hand this week to the claim:

And guess what? The answer is a big fat FALSE.

This fake news has been shared and reshared on social media since 2014, but according to Snopes, the biggest perpetrator of this myth is a website called Natural News.

Visit the Snopes article for an in-depth debunking of this myth, but in a nutshell, this is why the claim is false:

The goal of these adjustments is to remove shoddy data from the dataset using pre-established methodologies, not to fit a ‘climate change narrative.’

And the next time your uncle posts something about climate change being fake on Facebook, call him up and (nicely) tell him about the reality.

The National Theatre in London has declared a climate emergency and has terminated its relationship with Shell. The energy giant was one of 19 corporate gold members, which means it contributed between £15,000 and £30,000 annually.

The membership will end in June 2020. The National Theatre’s climate emergency and key areas of focus can be read here.

Two days ago, the Royal Shakespeare Company (RSC) in Stratford-upon-Avon ended its partnership with BP after student protests. Sir Mark Rylance resigned as an RSC associate artist earlier this year because of BP’s sponsorship of the RSC. BP spends £7.5 million per year on arts and culture sponsorship.

Purdue University scientists have found that deodorant, makeup, and hairspray may contribute to air pollution indoors. So the scientists are working on a way to provide better ventilation, and thus air quality, for office workers. Assistant professor of civil engineering Brandon Boor explains below. (And while they’re busy figuring this out, people, maybe take it easy on the aftershave and perfume.)