In the US, gas beat coal. And in 15 years, renewables and batteries will in turn beat gas.

A new report from the Rocky Mountain Institute (via Bloomberg) says:

By 2035, it will be more expensive to run 90% of gas plants being proposed in the U.S. than it will be to build new wind and solar farms equipped with storage systems… It will happen so quickly that gas plants now on the drawing boards will become uneconomical before their owners finish paying for them, the study said.

Natural gas currently makes up 35% of electricity generation in the US, with coal trailing behind it at 27.4% as of 2018.

Solar garden fences in the Netherlands 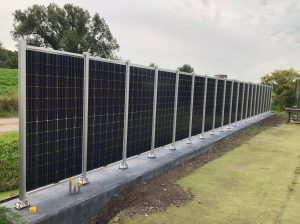 The subreddit Futurology is buzzing about this solar garden fence (left). The description reads, “Solar panels are getting so cheap people have started using them as garden fences that double as electricity generators.” (It was posted on Reddit by u/lughnasadh, aka Ben Mulvey.)

A bit of Twitter searching led me to Gideon Goudsmit, who is the founder of the National Energy Commission in the Netherlands. Goudsmit is described as an entrepreneur on Energy-Positive. It’s an Amstelveen, Netherlands-based company that provides sustainable products such as solar panels, fasteners, and EV chargers. (He’s the company’s main point of contact.)

Per capita energy usage in the Netherlands is 6,314.19 kWh. What do you think of the solar garden fence? Let us know in the comments section below.

Amazon has about 65,000 employees in the US. And nearly 1,000 (and growing) are going to strike on September 20 to demand that “the tech giant lower its climate emissions to zero by 2030,” according to Mashable:

The walkout is a reaction to Amazon’s dealings with the fossil fuel industry, including the company’s funding of $15,000 to the climate change-denying think tank Competitive Enterprise Institute.

The group is also calling on Amazon to stop funding politicians and lobbyists who deny climate change and to discontinue their work with oil and gas companies, which use Amazon’s artificial intelligence technology, such as advanced machine learning, to accelerate oil and gas extraction.

The walkout of Amazon Employees for Climate Justice “will be joining youth and workers in different sectors on this day for a global climate strike.”

The group says this is the tech industry’s first walkout for climate change.

We want Amazon to commit to zero emissions by 2030 and pilot electric vehicles first in communities most impacted by pollution. We should be leaders reaching zero first, not sliding in at the last moment.

No California city or county tax for rooftop solar

Cities and counties have the ability to tax utility services, such as electricity, as one potential source of local revenues. Since 2013, the energy generated by rooftop solar panels has been explicitly exempt from what is called the ‘Utility Users Tax’ or ‘UUT.’ That pre-existing exemption was set to expire December 31, 2019. AB 1208 extended it another seven years.

The bill unanimously passed both the State Assembly and Senate.