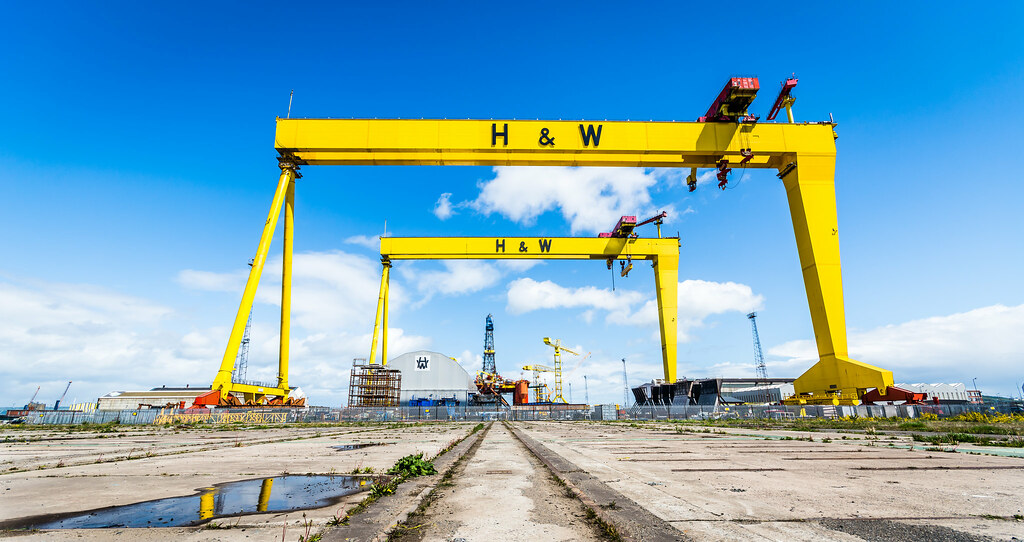 Belfast’s shipyard Harland & Wolff, which built the Titanic, has been bought by energy infrastructure company InfraStrata for £6 million, saving the famous shipyard from shutdown.

Seventy-nine staff who did not take voluntary redundancy when the company went into administration in August will keep their jobs, and InfraStrata says it will increase the workforce by several hundred people over the next five years. In recent years, the yard had focused on wind energy and marine engineering projects.

InfraStrata’s main project is the controversial Islandmagee gas storage project in County Antrim. According to the Belfast Telegraph, “Harland and Wolff workers are now set to be involved in steel fabrication works at the underground facility required for the project in the salt caves.”

InfraStrata’s purchase of Harland & Wolff is a mixed bag. The shipyard, which was founded in 1861, is a Belfast landmark, and it will provide jobs in the Northern Irish city. However, the Islandmagee project has faced opposition on environmental grounds, and InfraStrata focuses on gas storage. The company quit oil and gas exploration in 2016, but natural gas is a fossil fuel. Green campaigners, including actor Mark Ruffalo, have campaigned against previous InfraStrata exploration projects.

Ordener-Poissonniers, an old railroad system in Paris’ 18th arrondissement, is going to be turned into a 3.7-hectare “ecosystem neighborhood.” According to Inhabitat:

In addition to the creation of large public parks, the neighborhood will include carbon-neutral architecture and renewable energy systems. 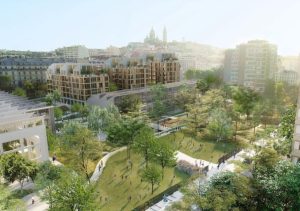 The mixed-use masterplan will include housing for 1,000 residents — half of which will be for social housing, 20% for intermediate and the remainder for private housing — as well as 13,800 square meters of office space, new school buildings, an industrial design incubator for SME, a nine-screen cinema complex, urban farming areas, and plenty of restaurant and retail space.

To minimize the development’s environmental footprint in the long run, the buildings will be optimized for wind and solar conditions. Other sustainable features include photovoltaic panels mounted onto the roofs, planting plans that promote biodiversity and the use of natural materials, and prefabricated low-carbon concrete floors.

The construction of the project is set to be completed in 2024. The project is designed by Danish landscape architects SLA and French firm BIECHER ARCHITECTES.

MIT startup Optimus Ride has developed electric, autonomous six-passenger shuttles that can be used in “mixed-use developments, office/industrial parks, ports, airports, academic campuses, and city zones.” They are being driven in areas with geofences.

The vehicles are currently operating in Brooklyn’s Navy Yard and in Boston’s Seaport. Later in 2019, Optimus Ride will deploy its vehicles in a private community in Fairfield, California, and in a mixed-use development in Reston, Virginia.

A lot of corporate campuses are sprawling, and many companies are trying to figure out how to connect workers to each other so they can more easily meet and collaborate.

At the same time, corporate campuses are trying to reduce the use of private automobiles and their carbon footprint. That’s because cars take up a lot of land they can use for construction of new buildings, laboratory, and office space.

Each vehicle currently has two nondriving operators. In the future, it will remotely monitor the electric vehicles.

The Irish Mirror is doing a series about sustainability in everyday life and ran an article about the rising popularity of electric vehicles in the Republic of Ireland.

In 2018, the number of electric cars on our roads doubled, and they’re set to do the same again this year.

The government plans to ban the sale of fossil fuel cars from 2030. They aim to have 950,000 electric vehicles on Irish roads by then, too.

The paper interviewed some EV owners who explained why they’ve embraced electric.

Guillaume Séguin, Cork City: “If I charge at home, it costs me €2.50 overnight. That gets me 150 km to 200 km in range. It gets me going around Cork for a week. Of course, the car’s a bit more expensive in the first place, but you get the cost back in a few years, depending on your mileage.”

Heather Nuzum, Carrigaline: “The environment is a big issue now so you can feel good for doing your bit. It’s automatic, there’s no gears. I drive in eco mode all the time, which increases regenerative braking and saves energy.”

Ireland has 1,100 public charge points that are currently free of charge, and credit unions across Ireland are offering low-interest green car loans.