On the private sector front: “87 major companies — with a combined market capitalization of over US$2.3 trillion, over 4.2 million employees, and annual direct emissions equivalent to 73 coal-fired power plants — committed to setting climate targets across their operations.” You can read more about that here, on the UN’s website.

Oh, and Greta Thunberg and 15 other children filed a complaint against Argentina, Brazil, France, Germany, and Turkey over the climate crisis. (Those countries have ratified the UN Convention on the Rights of the Child, which states children have the right to life, health, and peace.) Those kids aren’t messing around.

A big new solar farm for the Dutch

One of the largest solar farms in the Netherlands, the Vlagtwedde project in Westerwolde, has been agreed upon, according to the Construction Index.

The 110 MW solar farm will be made up of almost 350,000 panels and will cover an area of 100ha. In total, it is expected to produce enough power for approximately 30,000 households.

The project was initiated by PowerField and was developed with Solarcentury, which will construct and maintain the project for Impax, the owner and investor.

Panasonic, the world’s largest manufacturer of lithium-ion batteries, has announced a new residential energy storage system at Solar Power International 2019. EverVolt is compatible with any solar system and has a range of 5.7kWh to 34.2kWh of energy storage.

EverVolt can be installed by one person and comes with advanced software and a user-friendly app for homeowners. It’s backed by a 10-year product and performance warranty.

This is great news for the solar industry, as the more choice of easy-to-use, affordable battery storage technology there is, the more incentive there is for residents to adopt solar power.

Shout for your green energy supper 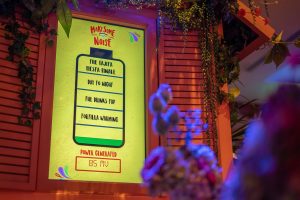 A pop-up Mexican restaurant in London is using customers’ conversation to create power. Old El Paso is using piezoelectric technology to generate electricity with specialist microphones positioned around each table. The more conversation the table engages in, the more usable electrical volts they produce.

The Piezoelectric Effect is the ability of certain materials to generate an electric charge in response to applied mechanical stress.

Virtual batteries at each table store the power each table is producing. And as the battery fills up and reaches certain voltage levels, it unlocks power — and fun — for the table.

This probably won’t overtake solar or wind in the green energy sector, but it’s a fun way of demonstrating innovation with clean power (and great for those of us with loud voices. Ahem). Shout on, folks, and enjoy your tacos.