Last month Lectric Bikes sent out a pre-production prototype of their new Lectric XP for me to test. This bike is one of those big little e-bikes, a fat tire e-bike that still folds in half to fit in a trunk or backseat.

The production bike is currently on pre-sale for just $899, which is a pretty amazing deal for a 28 mph (45 km/h) rated e-bike that still offers 500 Wh of battery capacity for a range of around 25 miles (40 km) of throttle-only riding. Add some pedal-assist and you can get even more range out of the frame-hidden LG battery.

Check out my video of the bike below, followed by the tech specs, then read on for more!

How did the Lectric Bikes team achieve these specs at this price? Well, this isn’t their first ride around the block, so to speak. They actually began with electric skateboards back in 2015, founding Lectric Longboards and selling thousands of boards while working to bring prices down in the industry.

With their experience in the electric skateboard industry and the ability to source, supply, and market affordable electric micro-mobility devices to satisfied customers, the team then turned their sights on electric bicycles.

And here we are with the Lectric XP folding fat-tire electric bicycle. 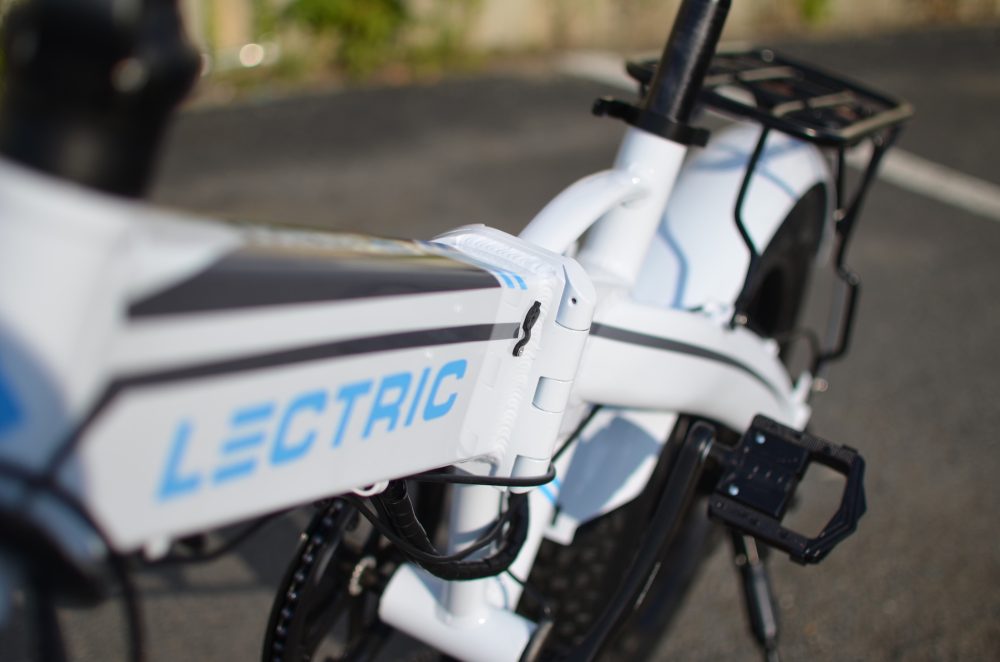 How does it perform?

The bike makes some pretty bold claims. And so far in my preliminary testing, I’ve found the Lectric XP to mostly live up to its claims. The only one it has struggled with is the speed, where it is about 90% of the way there. I’ve found my top speed on the bike to reach around 25 mph (40 km/h). But as this is the pre-production prototype, it doesn’t have the final electronics tweaks that take it all the way up to 28 mph (45 km/h). Those are coming on the production version that customers will receive and I’ll be reporting back on the production model soon.

But if my preliminary testing is anything to go by, the Lectric XP manages to pack some serious value into a fun little e-bike.

The 48V system, 500 W motor (rated at 800 W peak) and 20” wheels mean it has plenty of torque for good acceleration on flat ground or proper hill climbing when the terrain gets angular.

The giant tires mean you can ride over dirt, grass, pavement, sand, or anything else that gets in your way. There’s no suspension, but the fat tires make up for it on all but the bumpiest of terrain. And for less than $900, let’s get real. There’s no way you’re getting good suspension for that price. So I’m happy with a rigid fork and frame without a cheap spring to fail me.

And for the price, the included features are impressive too.

These are all features that many companies charge extra for, but the Lectric XP offers as standard features. And to top it all off, the bike is easily transported.

As owner Robby Deziel explained it to me, making the bike easy to transport was key to its design from the outset:

“We designed the bike with the RV community in mind, and we have been selling mostly to them. We made design decisions in order to provide customers with a really versatile transportation solution that is also a blast to ride. For example, we went with fat tires so off roading around the campground is a possibility, and you get great comfort out of the higher air volume that fat tires provide. We also elected to go without a suspension fork to save on weight because we know folks will be loading and unloading their bikes often.

The option to go 28 mph is something that makes the bike great for RVers as well. At this speed riders are going as fast if not faster than other transportation solutions such as scooters, golf carts, or mopeds. Another great thing about our bike is it ships to customers fully assembled, so if you are on the road when you receive your bike there is no hassle and you can get riding right out of the box.”

Now, is the bike perfect? Of course not. It’s an $899 e-bike, after all. I’ve ridden many nicer bikes that cost 3-4x the price and come with fancier grips, juice brakes, plusher saddles, etc.

But you know what? When it comes to value, as in bang for your buck, many of those bikes can’t hold a candle to the Lectric XP. While it doesn’t have the same fit and finish as a high price e-bike, it can go as fast (or faster) and as far (or farther) than most of them and will be a ton of fun for you while doing it. And if it goes 90% of the way to achieving what more expensive bikes can do yet costs just a fraction, then I consider that some good value.

I’m not sure the Lectric XP is going to last you for a decade like some other more expensive e-bikes, but I can see it giving you a few good years of commuter and recreational service. And since not everyone can afford the nicest, shiniest European-made e-bikes, a good quality budget bike like this is certainly refreshing for the market.

If you need a curb hopping, high speed yet budget-friendly e-bike, the Lectric XP is likely a good option for you. Make sure you check it out over at Lectric Bikes, but don’t wait too long. The price of $899 is currently $200 off the MSRP, which the bike is projected to return to after the presale ends.

What do you think of the Lectric XP? Let us know in the comments below!