Los Angeles has one of the larger concentrations of Teslas in the world, so where better to set a record for the most Roadsters assembled in the US than at Tesla’s Design Center in Hawthorne?

Yesterday, Tesla Club LA did just that (with thanks to Tesla for providing the location and chargers), and managed to get 37 Roadsters into the same parking lot, in what we’re pretty sure is a record.

Tesla Club LA (formerly “SoCal Greenspeed”) is one of the oldest Tesla owners’ clubs, and includes many Roadster owners from the car’s original run of production.

The original event announcing the Roadster, in 2006, was held in Santa Monica, so a lot of locals have been involved from the very beginning.

The club has had many similar meetups in the past, including the original “Roadster Round-Up” in 2009, which was held to celebrate Tesla’s 500th delivery (the last of the 2008 model year “1.5” series cars — later cars were referred to as “2.0” or “2.5” and had significant changes).  Here’s a fairly well-known picture from that event: 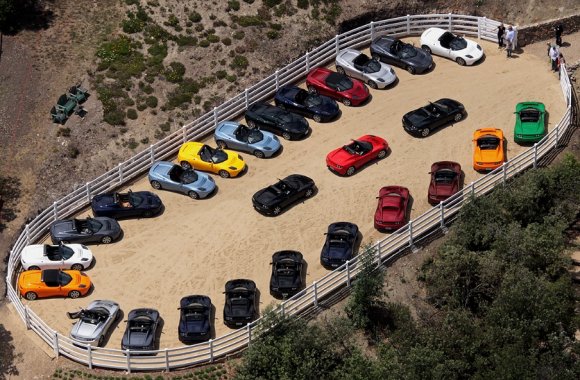 This was quite the gathering of cars, and the car was still new and exciting (okay, it’s still exciting enough to elicit several thumbs up and turned heads on the road today), and owners were a little easier to track down.

Since then, cars have shifted hands many times — about one-third of today’s attendees were original owners.  Tesla club meetups tend to have a lot more S/3/X show up with only the occasional Roadster or two.  And at least one Roadster seems to have disappeared off the face of the Earth.

But to commemorate the 10th anniversary of this event, it was about time to try to get the band back together.  The secret location was set, and word of mouth was passed around about the first Roadster-only meetup in a long time. 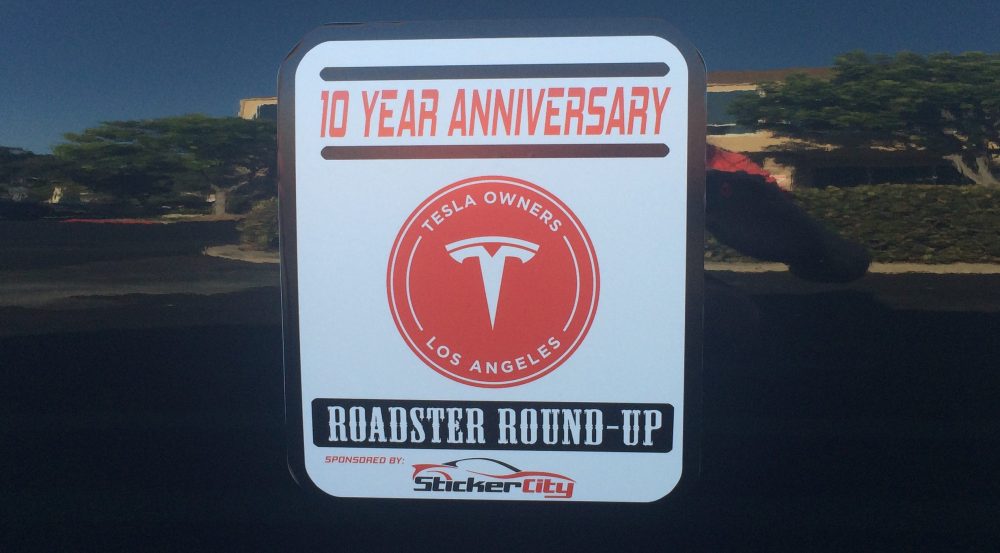 There were several unique or interesting cars in attendance.

Tesla has traditionally included “Founders series” and “Signature series” cars in the early production runs of their new models, a tradition that started with the Roadster. At the event, one Founders series car showed up, No. 16 owned by Eric T. We also had three “Signature 100” cars, Joyce with No. 8, Robert with No. 73 and Ralph with No. 91.

As for more “recent models,” a few cars showed up with the Roadster 3.0 battery upgrade, which enables comfortable round trips from San Diego to Los Angeles without need for a charge on the way. 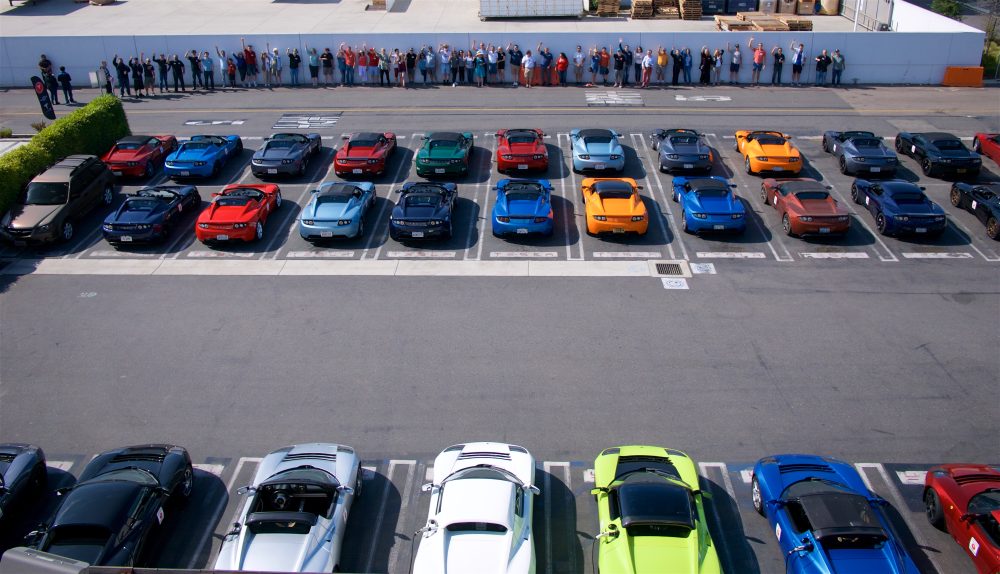 Another unique car was Eric S.’s No. 500, the deep copper-colored one 3 from the right in the middle row in the photo above. This car is the last of the 1.5s and came with a factory custom paint color — one of very few Roadsters to come from the factory with custom paint. The only other I’m aware of was a Roadster delivered in primer so an owner could have it painted in the same yellow as his Lamborghini. Notably, the “insane green” car in the bottom of the frame is another rare factory paint color in the US, though the one pictured here is a wrap.

But perhaps the most impressive of all was Brandon’s Roadster, which had a distinctive accessory: Arizona plates. He heard about the event the night before, then set out almost immediately and made it just in time after 12 hours of travel. Note that Roadsters do not have supercharger capability and must use adapters for basically any charger currently in existence. While they can charge at 70 amps, there are very few public 70A AC chargers in existence anymore. So Brandon’s feat was quite impressive — and came with a grille full of dead bugs: 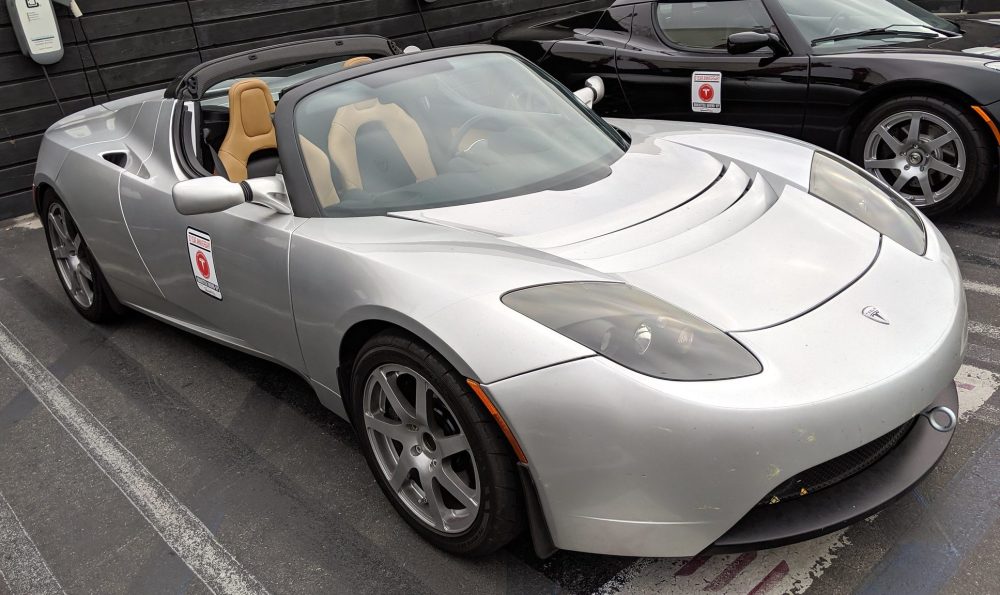 Thankfully, a Tesla facility is a great place to find a charge, so the out-of-towners had a chance to top up on the many chargers Tesla made available for us.

After everyone had their fill of electrons, 25 of the cars continued on for a short Sunday drive up the coast to Malibu, and took over a local parking lot just off Pacific Coast Highway: 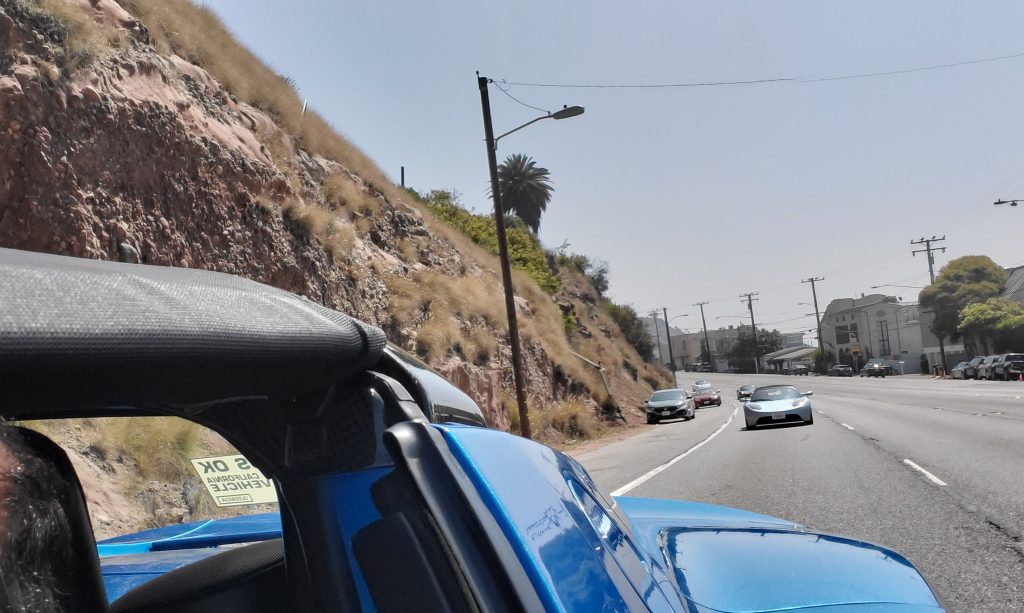 Unfortunately, one car that didn’t show up was the new Tesla Roadster prototype. Tesla design chief Franz von Holzhausen had been slated to show up with it, but there was a last-minute conflict. We’re hoping they’ll be able to show up to the next event, whenever that may be.

And for one final, perhaps unbelievable, tidbit from the day: There were about five or six owners in attendance who stand over 6 feet tall in height. Who says this car is too small?

If you’re interested in hearing about other events like these, feel free to look up your local Tesla club. Tesla Club LA and OC Tesla Club were the main participants in today’s event, but other regions have their own Tesla clubs as well. Many of them are listed on Tesla Motors Club, so have a look there for something in your area.