Shea is no stranger to custom motorcycles. He’s built dozens of them.

In doing so, he’s learned first hand about modifying and scratch building custom frames and other motorcycle components, as well as making use of the parts you have around you.

But he’s not just a garage tinkerer. Shea also has a degree in aerospace engineering, which he has put to good use in designing the aerodynamics of his electric motorcycle.

The design is known as a streamliner motorcycle, which is even more aerodynamic than a fully fared motorcycle. The rider is completely enclosed within the body of the streamliner.

The nature of the design has presented Shea with interesting challenges he’s had to solve. With such a long motorcycle and with the rider sitting so far from the rear wheel, it can be hard to keep an eye on traction. So Shea designed a simple but effective form of traction control. He uses a hall sensor to monitor the RPM of the front and rear wheel. If the sensors notice a discrepancy, it flashes a warning light for him in the cockpit so that he can adjust his inputs. 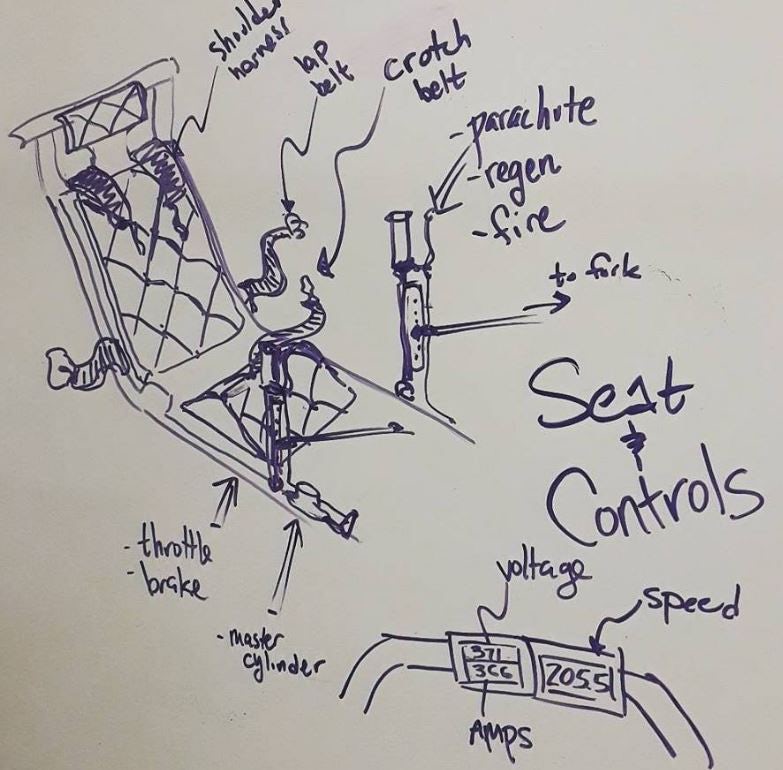 Shooting for a land speed record on a budget

Shea estimates that his passion project will cost him around $15,000 in the end. And that’s including a number of sunk costs such as over $3,000 on safety equipment including multiple parachutes and fire extinguishers as well as $800 just to sign up for the land speed record attempt. That leaves the actual motorcycle costing around $10,000. That’s certainly not nothing – you could get an entry-level Zero electric motorcycle for $10k. But for a 200+ mph (320+ km/h) land speed streamliner, that’s downright cheap.

The bike has cost Shea so little because he was clever about sourcing parts that could be recycled. His batteries come from salvaged industrial battery packs that were tossed out when the manufacturer thought they had reached their end of life. After saving the battery pack from an early demise, Shea disassembled it and found that just a few individual cells had died, resulting in the larger pack appearing to be dead.

As Shea explained to New Atlas:

“But I pulled it apart, and all the other cells were pretty good. They’d been abused – it was some sort of dyno setup, so they hammered it real hard, but they’re at like an 85 percent state of health. Plenty of energy in ’em.”

He then built a custom battery pack using the salvaged battery cells. He even ended up scoring a free motor and inverter too through his cunning, which helped drastically decrease the overall costs of his electric streamliner.

All told, the motorcycle is outfitted with 22 kWh of battery and a 200 kW (268 hp) motor. The batteries are massive and heavy LiFePO4 cells – not the type you’d put in a purpose built racing streamliner if you had any other option. But Shea didn’t have any other option, and so that’s what he’s got.

Shea hopes to make it to El Mirage in June or July, then Bonneville in August. If he can make it and set a new record, we’ll be sure to update.

We’re rooting for you, Shea!