Clean energy scorecard shows few US cities on pace to meet climate goals — where does your city rank?

A newly released report tracks the progress of American cities when it comes to clean energy efforts, and finds that fewer than a dozen are currently on pace to meet greenhouse gas emission goals.

The American Council for an Energy-Efficient Economy released its 2019 City Clean Energy Scorecard, which now tracks policy efforts among American cities to advance renewable energy, as well as energy efficiency.

Most of the 75 cities featured in the scorecard have set emissions reduction targets, but very few of them are currently on track to hit those marks. ACEEE:

One-third (26) of the 75 cities surveyed have yet to even set greenhouse gas (GHG) reduction targets. Of the 49 with targets, 22 are not yet fully tracking their progress. The remaining 27 have data, and of those, 8 are not projected to be close to achieving their targets and 8 are projected to make substantial progress but still fall short. Only 11 are on track to meet their GHG reductions goals.

Additionally, Cincinnati, Hartford, and Providence were all listed as “Cities to Watch” based on “adopting several major clean energy policies and programs since early 2017.” Here’s the full ranking of all 75 cities, in map form: 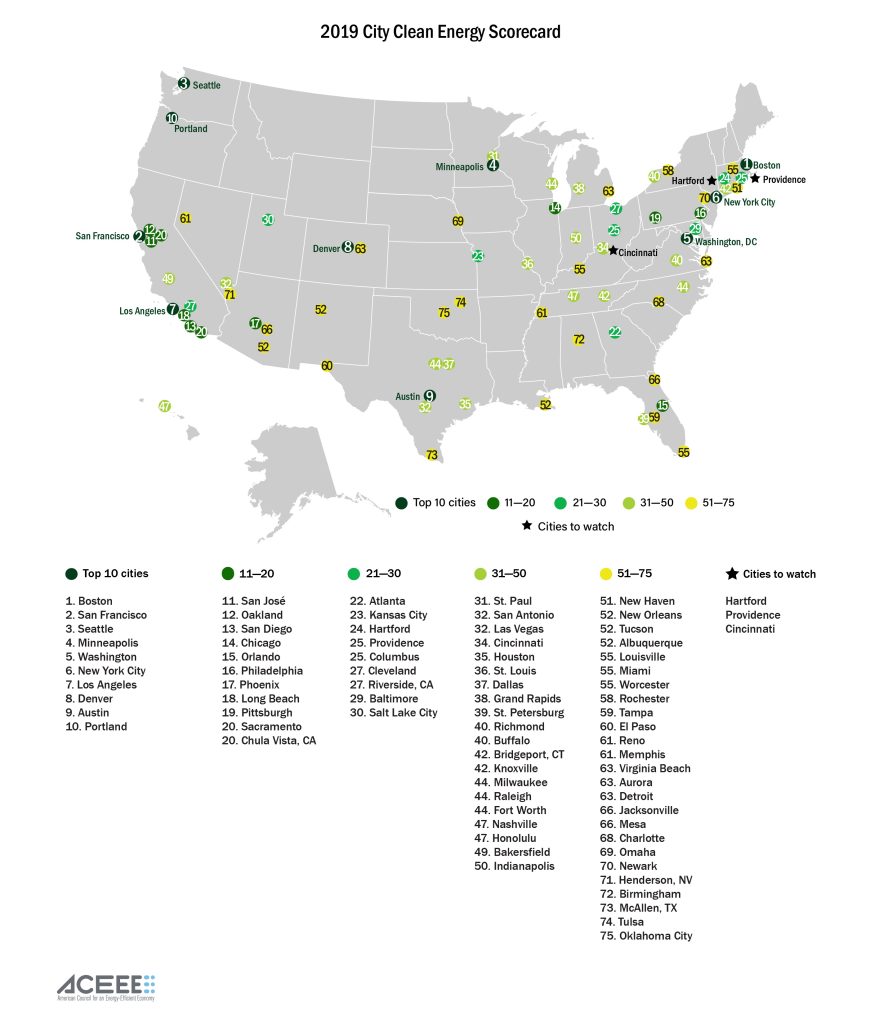 A deeper dive reveals that Portland looks to be leading the way when it comes to an electrified municipal fleet, as nearly half of its fleet is either hybrid or all-electric, and the split between the two types of vehicles is roughly even.

San Diego leads the way in both renewable efforts for energy utilities and renewable energy incentives.

ACEEE also ranked the states, with Massachusetts on top — perhaps unsurprisingly due to Boston’s ranking. The nonprofit does the scorecard every two years. The full report, which can be accessed through the ACEEE’s website, has further details on each city.

While some may wish to pick at the methodology of such reports, the ACEEE took many factors into consideration here, and there’s nothing wrong with healthy competition between cities — especially when the stakes are so high. The list of leaders is largely unsurprising, but hopefully, it inspires other cities to improve.

We’d like to see more cities on track to meet those climate goals, but many have only set targets in the last few years as the movement builds. If there’s another scorecard in two years, that’ll tell us a lot more about how the cities are progressing. We also hope every city on this list will have its own target by then.