Volkswagen has released its latest EV-focused video for the US, as the automaker compares the electric future to the moon landing, as the 50th anniversary of that historic event draws near.

Titled “A New Mission,” the newest clip follows “Hello Light” and “Something Big” in VW’s ongoing “Drive Bigger” US campaign.

Unlike those ads, which gave viewers a glimpse of its ID. Buzz electric concept bus, this new video shows photos and clips around the time of the first moon landing with Apollo 11 on July 20, 1969, before listing some goals of VW’s plan:

The video is backed by an early demo version of David Bowie’s “Space Oddity.” Here’s the full minute-long clip:

The campaign’s print ad, which does showcase the ID. BUZZ, brings the moon connection a bit more into focus: 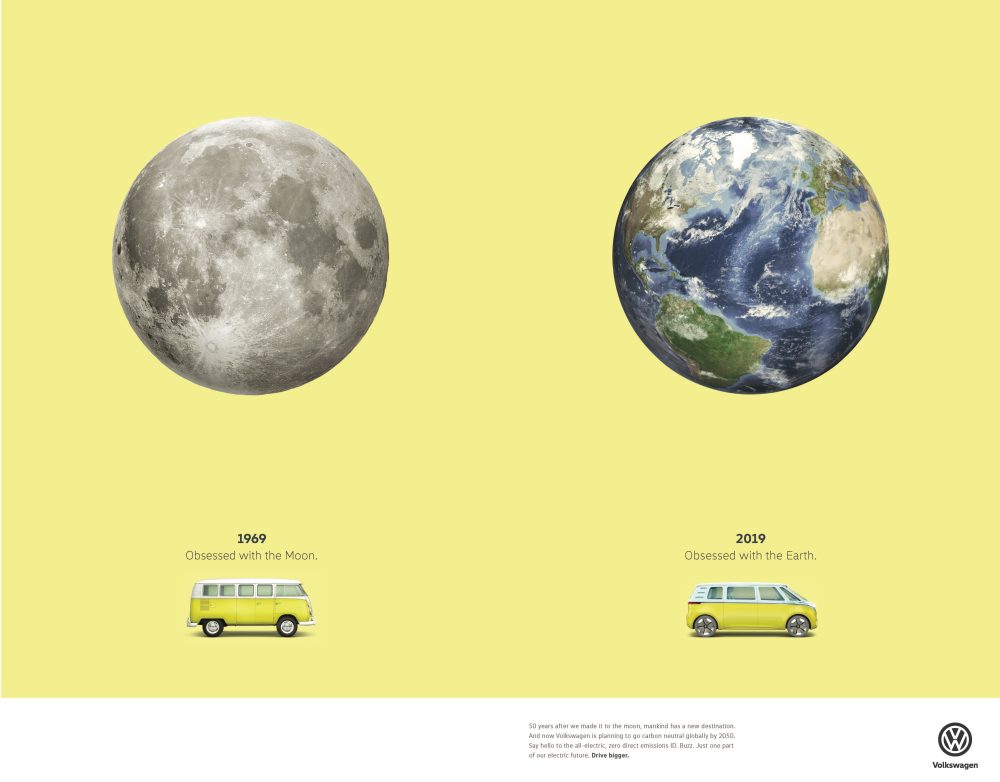 Jim Zabel, Senior Vice President of Marketing for Volkswagen of America, said in a statement:

“As the world’s largest automaker, we have a responsibility to lead by example and through the ‘Drive Bigger’ platform, look at this cultural achievement of putting a man on the moon through a new lens. As we take the substantial steps toward our goal of going carbon neutral globally by 2050, and Volkswagen’s role in ushering in a new era of electric driving, we invite all to join us to a reinvigorated focus on our planet.”

While many will still debate VW’s role in Dieselgate and its corresponding shift toward EVs, it’s clear the automaker is now committed.

It’s a new thing to see so many electric vehicle-focused ads from one carmaker in the US, especially within such a short amount of time, and these commercials have often been aired during major events, like the Women’s World Cup. And we mean often. It can certainly move the needle on public interest.

“A New Mission” was just released, so we’re not sure yet where it will turn up on TV, if at all. For the record, VW is calling it a “film.”

The new video is timely, with the 50th anniversary of the first moon landing just around the corner, though the connection may not seem immediately clear to some.

Overall, this has been a somewhat thought-provoking campaign from VW thus far, though we’re also looking forward to the time when the automaker — and many others — can focus on actual electric cars in ads, when they’re closer to hitting the market. (This is what VW is doing in Europe already with its ID.3 electric hatchback videos.)

What are your thoughts on “A New Mission” and VW’s US EV campaign so far?