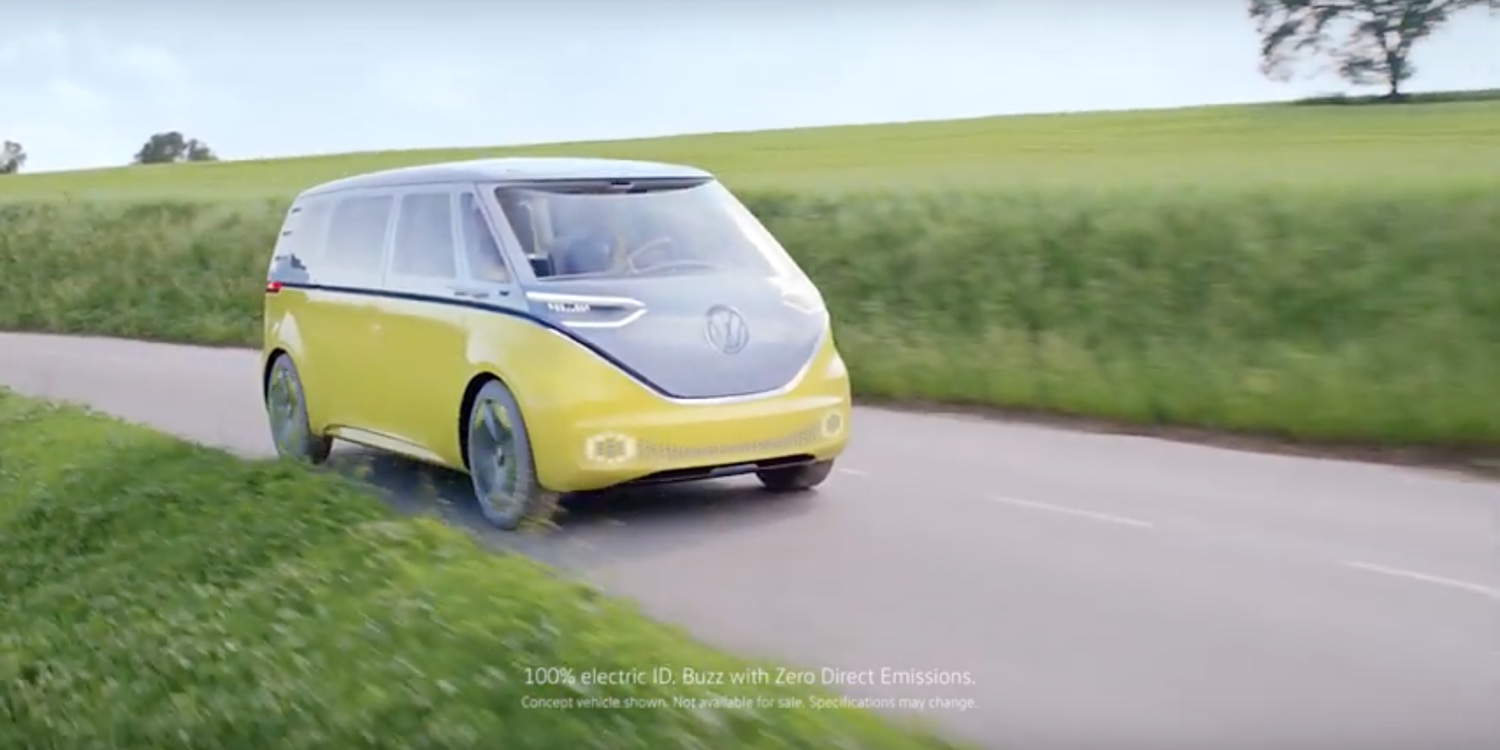 Volkswagen’s “new direction” in the US is already in full swing as the company has unleashed a blitz of ads during the past few weeks, with one constant — the ID. BUZZ electric bus, still just a concept vehicle that’s three years from production.

VW released its “Hello Light” ad a few weeks ago, and the commercial has already received more than 20 million views on YouTube. Simon & Garfunkel’s “The Sound of Silence” provides the soundtrack for the ad, which directly references the company’s own Dieselgate emissions scandal.

Since then, VW has rolled out its much-sunnier “Drive Bigger” campaign. This phase of VW’s rebranding of sorts “marks a return to the thoughtful, fun and unassuming Volkswagen ads of the 1950s and ’60s,” as the automaker itself says.

Volkswagen is addressing all advertising avenues with its new campaign — print, digital, social media, and of course, TV.

Print ads reference VW ads of years ago — “Lemonade” is a take on the classic Volkswagen Beetle “Lemon” ad — and detail the company’s American manufacturing plans and carbon neutrality goal, in small type below promo images of the ID. BUZZ: 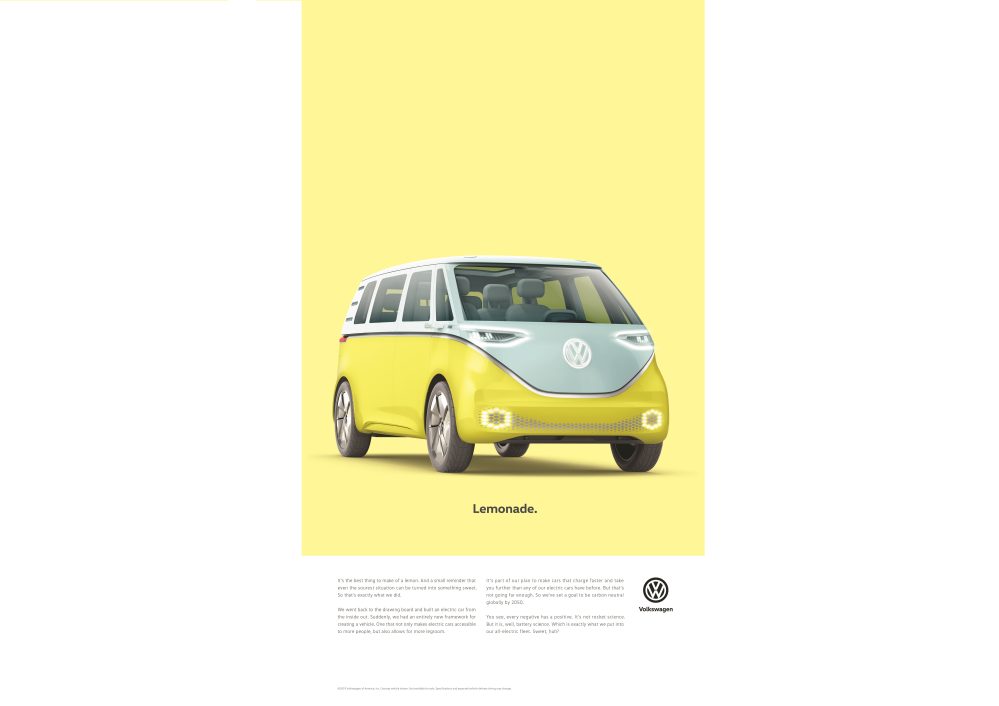 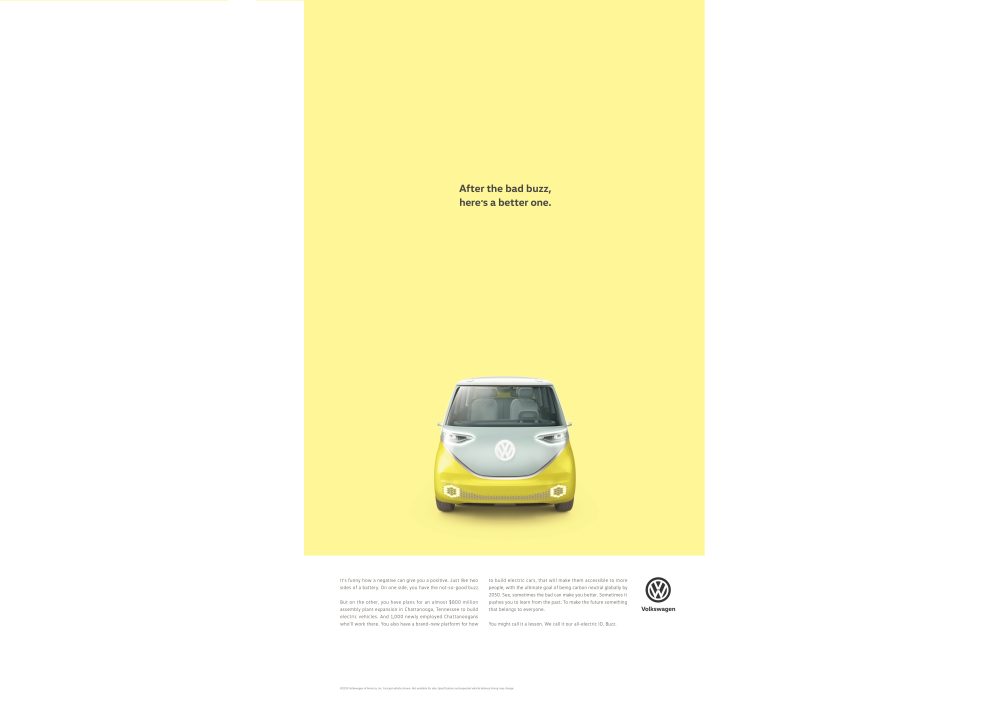 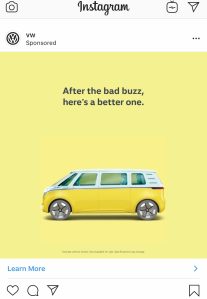 And if you’ve watched any of the Women’s World Cup, VW’s “Something Big” commercial has been unavoidable:

While there’s still resentment in some circles over Dieselgate, from the feedback we’ve seen thus far, it appears many EV supporters are looking to move on and embrace Volkswagen’s new direction.

“Hello Light” turned out to be a rather quick bridge to this new, sunny VW vibe. To me, that ad was more effective than the “Something Big” commercial, which doesn’t have a confusing overall concept, but can still be a bit tough to follow. (Small moments of kindness are “bigger,” but the planet is ultimately bigger than the ID. BUZZ. Well, sure.)

Again, the ID. BUZZ isn’t slated for release until 2022, while the ID. CROZZ is expected to launch next year. (VW is already taking pre-orders for its ID.3 electric hatchback in Europe.) Yet, the CROZZ crossover is nowhere to be seen in any ads — it’s all about the electric bus. That may be a smart move, as the old VW Bus still enjoys some level of iconic status in the US.

Personally, I think the ID. BUZZ is very cool, so I get the appeal. But it’s still a bit odd to put so much focus on a vehicle that’s still just a concept in such a prominent PR push.

Will it really help put more EVs on the road? Or is it just another greenwashing effort?